Zeroing in on baby exoplanets could reveal how they form 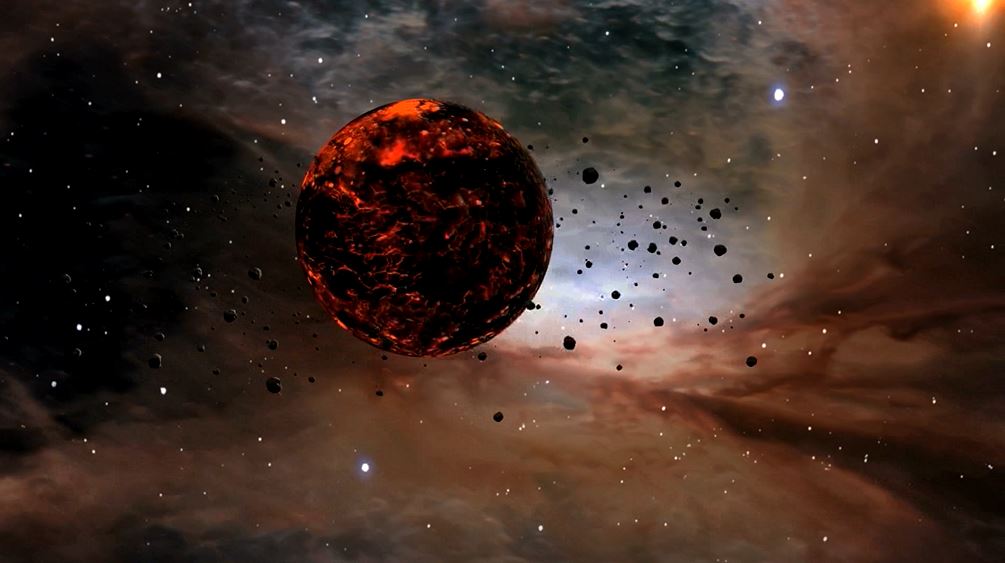 The way that a young exoplanet interacts with its star's disc of dust and gas determines the type of exoplanet that will ultimately form. Image credit - NASA/JPL-Caltech/D. Berry

Twenty-four years ago, Swiss astronomers Michel Mayor and Didier Queloz discovered the first planet orbiting a sun-like star outside our solar system – a milestone recognised by this year’s Nobel prize in physics. Today we know of thousands more ‘exoplanets’, and researchers are now trying to understand when and how they form.

The known exoplanets are certainly an eclectic bunch. They range in size from small rocky planets, like Earth, to gas giants that are many times bigger than Jupiter.

Some have meandering orbits, whereas others orbit not one star but two. Some have the modest mass and temperatures that are thought necessary to support life, while some are hellish balls of heat and crushing gravity. Some exoplanets appear to orbit their stars alone, while others orbit along with several other planets, like Earth in our solar system.

The vast majority of those we’ve discovered so far, however, are Earth- to Jupiter-sized planets that orbit very close to their host stars – often closer than Mercury orbits the sun. Astronomers are trying to understand how these close-orbiting planets came into existence by studying examples in different – preferably early – stages of formation.

But young, faint exoplanets are hard to make out amid the glare of a highly active parent star. As a group led by Dr Jerome Bouvier at the Grenoble Institute of Planetology and Astrophysics in France asks on its website: ‘Have you ever tried to listen to Sibelius next to a jackhammer?’

To see through the noise, Dr Bouvier and colleagues are employing some of the world’s most powerful telescope arrays, such as the European Southern Observatory’s Very Large Telescope Interferometer on the Paranal mountain in Chile. Meanwhile, computer simulations of how a young planet disturbs the disc of gas and dust surrounding its nascent star will help them know how to spot young exoplanets in real space.

'One million years – (for an exoplanet) that corresponds to about two days on the scale of a human lifetime.'

The researchers hope that their project, SPIDI, will lead to the discovery of close-orbiting exoplanets as they are forming, when they are about a million years old. ‘One million years – that corresponds to about two days on the scale of a human lifetime,’ said Dr Bouvier.

One and a half years in, the project is still too new to have delivered any results. But by measuring the properties of close-orbiting exoplanets in their baby phases, the researchers aim to understand how they are born.

The project will probably not shed light on the formation of exoplanets with other types of orbit, however. And the type of orbit is important, because it determines the conditions on an exoplanet’s surface – and potentially whether it is habitable.

Each type of exoplanet and exoplanet orbit could be studied individually. But Professor Richard Alexander of the University of Leicester in the UK believes that by studying different types of exoplanets orbiting different stars there is less chance of missing important processes that help make up the big picture of planetary formation.

‘To use a very poor analogy: if you could only see one part of an elephant – its trunk, say – you would end up with a very different understanding of elephants to someone who could only see its toes,’ he said. ‘By looking at different types of (exoplanet) systems, we're trying our best to step back and look at the whole of the “planet-formation elephant”, rather than just one part of it.’

Somehow, the way that a young exoplanet interacts with its star’s disc of dust and gas determines the type of exoplanet that will ultimately form. Prof. Alexander’s project, BuildingPlanS, involves developing computer simulations that predict the effect of different formation processes.

These simulations can be tested against observations to see whether the processes they describe are accurate.

The approach is paying off. In one recent study, led by Prof. Alexander’s colleague Dr Dipierro at the University of Leicester, UK, the computer simulations suggested that a ring observed in the disc of a star called Elias 24 is the path cleared by an orbiting, as-yet unidentified, gas-giant planet.

To really learn something new about planetary formation, however, the researchers want to predict something that has not yet been observed. ‘Then we can use new observations to test the physics directly, and maximise the understanding we gain from all this new knowledge,’ said Prof. Alexander.

Astrophysicists know that, in the very beginning, planets form as dust and gas accumulate under gravity. But this earliest phase of planet formation is especially hard to study.

The trouble is that the dust and the gas around young stars each evolve in very complex ways, and studying how they form planets together requires a lot of expertise and computing power. Traditionally, therefore, dust and gas have been simulated as separate processes.

But as Dr Mario Flock of the Max Planck Institute for Astronomy in Heidelberg, Germany, points out, the two processes cannot be truly separated. For instance, the presence of dust can reduce turbulence in the gas, while the turbulence of the gas impacts the size and fragmentation of the dust grains.

In a project called UFOS, Dr Flock and colleagues are starting to unite gas and dust simulations for the first time, to accurately describe some of the earliest stages of planetary formation. Their hope is to explain some of the features seen in very young stellar disks – spirals and rings – as the footprints of embryonic dust grains clumping together.

The biggest challenge here, says Dr Flock, is finding the right scales of time and space over which gas and dust interact with the most influence. ‘That requires huge expertise in magneto-hydrodynamics, dust coagulation, numerical tools and high-performance computing.

‘If we succeed to link the sites of grain growth and planet formation with current observations – that would be the highest goal,’ he continued. ‘It would help us to understand what’s currently happening in systems we observe now.’

Slideshow: The weird and wonderful world of exoplanets (click to launch)