Young brains compensate for deafness more than older ones 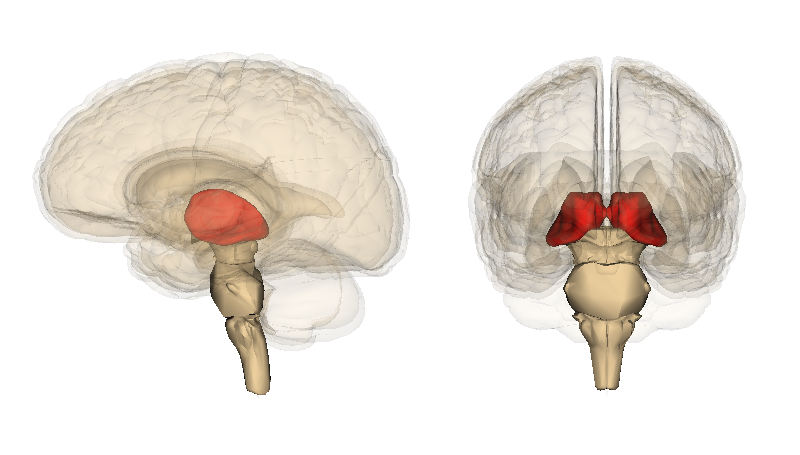 Understanding the thalamus, which processes sensory information in the brain, could help researchers develop new clinical interventions to help deaf or blind people. ‘Thalamus image’ by Was a bee is licensed under CC-SA 2.1

Our brains can adapt to losing sight or hearing, and the change is much more profound in younger people, brain scans are revealing.

People who lose their sight or hearing often develop greater ability in their other senses, as part of the brain’s way to compensate for the sensory loss. Even in children born deaf or blind, the brain has an astonishing capacity to enhance the senses that remain.

In the EU there are about 50 million people who are deaf or hard-of-hearing.

Age-related hearing loss affects one out of every three over the age of 65 and one out of two by 75. By 2025, the EU estimates that one in five people will be older than 65.

Over the last few years, there has been a shift in the focus of research into hearing loss - from concentrating on hearing loss suffered from birth, to looking more at age-related hearing problems.

Better understanding of this effect, known by researchers as cross-modal plasticity, could help to find more effective ways to help people who have severe problems with vision or hearing. It could also make clear how it should be managed, if it has the potential to cause problems later in life.

‘It appears that the reorganisation in the brain is much more important in early deaf people,’ said Olivier Collignon, associate professor at the Center for Mind/Brain Sciences at the University of Trento in Italy and research associate at the National Fund for Scientific Research in Belgium.

‘And it is qualitatively different to those who may lose their hearing later in life,’ said Prof. Collignon, coordinator of the EU-funded CP-FunMoD project, which is using functional magnetic resonance imaging (fMRI) brain scanners to study the differences in brain plasticity of people who have been deaf from an early age, compared to those who lose their hearing later in life.

The project has the long-term aim of improving our understanding of when clinical interventions such as cochlear implants can offer the best prospects of helping deaf people to hear.

‘It is about understanding how the brain reorganises when hearing is lost, and how the parts normally involved in processing hearing, process another sense, like vision,’ said Dr Jodie Davies-Thompson, who is also from the University of Trento and has an EU Marie Skłodowska-Curie grant to study cross-modal plasticity in deaf people as part of the project.

Doctors sometimes tell parents not to teach deaf children sign language, reasoning that exposing the auditory brain to a visual language may make it focus on visual stimulus too much, and cause difficulty with hearing and reproducing speech if they have a cochlear implant later on. However, children can be disadvantaged by delayed language-acquisition.

Dr Davies-Thompson's wants to find a more efficient way to identify those who are more likely to benefit from implants, and to examine the potential benefits of this reorganisation, by looking at how the brain changes depending on the age that the person lost their hearing.

‘Once we understand how duration of deafness, age of onset and the influence of the extent of cross-modal plasticity affect the response pattern in different parts of the brain, then we can start to understand the likelihood of a cochlear implant being successful,’ Dr Davies-Thompson said.

Other EU-funded researchers are investigating the exact mechanisms involved in cross-modal plasticity – down to the basic level of the molecules and genes involved.

Dr Guillermina López-Bendito, of the Spanish National Research Council (CSIC)’s Instituto de Neurociencias in Alicante, is looking at the crucial role of the thalamus, a structure that directs almost all sensory traffic within the brain.

The thalamus – about the size of two walnuts right in the middle of the brain – relays sensory signals to relevant areas of the cerebral cortex, where perception and sensory processing take place, among other tasks.

'It is about understanding how the brain reorganises when hearing is lost.'

Dr López-Bendito’s RECORTHA project, completed last year with support from the EU’s European Research Council (ERC), outlined the role of plasticity in the region of the thalamus in reorganising the brain.

Her current project, SENSORTHALAMUS, which is also supported by the ERC, is now looking at how stimulation or disruption of specific thalamic neurons affects the cerebral cortex, particularly when a sense is lost, or has never developed.

‘We are looking at what it is that the thalamus is doing, and, whether you need experience during your life - through the intact senses - to reorganise the brain, or whether the brain has an intrinsic capability to do that,’ she said.

Dr López-Bendito said her research appears to indicate that the brain’s ability to reorganise is, to some extent at least, an innate property.

‘If it is innate, that would mean it doesn’t need sensory experience for reorganisation to take place. And it appears that the thalamus has a very important role in this process,’ she said, adding that better understanding of these roles could contribute to developing new clinical interventions to help deaf or blind people in future.