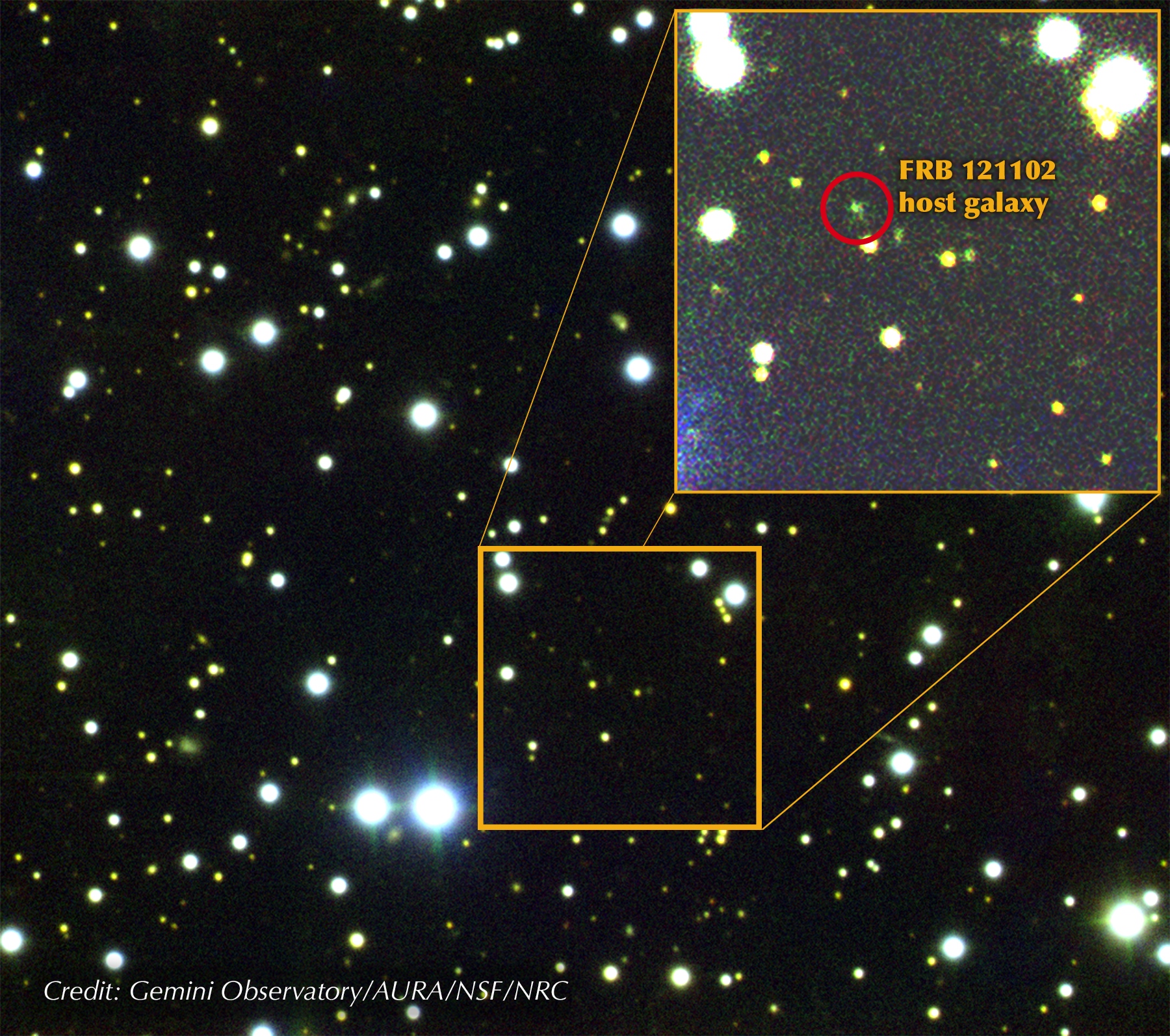 FRB 121102, a repeating burst, was discovered in 2015. This discovery enabled astronomers to figure out what galaxy the FRB came from and in turn locate hundreds more FRBs. Image credit - Gemini Observatory / AURA / NSF / NRC

Little more than a decade ago, two astronomers discovered mysterious bursts of radio waves that seem to take place all over the sky, often outshining all the stars in a galaxy. Since then, the study of these fast radio bursts, or FRBs, has taken off, and while we still don’t know what exactly they are or what causes them, scientists are now edging closer to some answers.

FRBs were first detected in 2007 by astronomers Duncan Lorimer and David Narkevic. While using the Parkes Observatory in Australia, the duo were stunned to witness an incredibly bright flash of radio waves coming from space. This strange event was called a Lorimer burst.

Since then, about 100 FRB discoveries have been announced. We’ve been able to pinpoint the location of some to other galaxies – none appear to take place inside the Milky Way – as well as see some happening in real-time and even witness FRBs that repeat. Despite numerous observations and plenty of data, we’re still at a loss to explain exactly what they are.

‘It’s not so often in astrophysics that there’s a new phenomenon that we really don’t understand and we have the opportunity to learn something genuinely new,’ said Dr Jason Hessels from the University of Amsterdam in the Netherlands.

Dr Hessels coordinated a project called DRAGNET, which ran from 2014 to 2018 and sought to observe and study more FRBs. It used radio telescopes around the world – including the Low-Frequency Array, or LOFAR telescope, in the Netherlands – to hunt for exotic stars and FRBs. At the time the project was proposed in 2012, however, people weren’t certain that FRBs were even real.

Yet, in 2015 the project made a key breakthrough. It discovered that a known FRB in another galaxy – dubbed FRB 121102 – was repeating. This discovery allowed astronomers to work out where the FRB was coming from – a faint dwarf galaxy 3 billion light-years from Earth. We’ve since found a second repeating burst, but until that first one, all FRBs had been single events.

‘That’s been a huge treasure chest of information,’ said Dr Hessels, referring to FRB 121102. ‘We’ve detected hundreds of bursts from it.’

Each flash lasts just a millisecond or so but can emit more energy than 500 million suns. As such, FRB 121102 is clearly noticeable against the backdrop of a galaxy, especially one as faint as this. Even at such a great distance, and having been produced before multicellular life on Earth began, the flash is intense enough for us to measure today.

When FRBs were first discovered, it was thought that they might be caused by cataclysmic events such as neutron stars – the remnant cores of collapsed giant stars – or black holes merging together. The fact that some FRBs repeat, however, suggests that might not be the case, although there could be multiple types of FRB.

Our best explanation so far is that they are caused by magnetars, neutron stars that have incredibly strong magnetic fields. It’s thought that these stars have enough energy to produce the bright flashes associated with FRBs, experiencing ‘star quakes’ as the magnetic field rips the crust of the star apart, releasing a huge amount of energy (although recent results released on 27 June suggest a possible unknown alternative origin for some FRBs).

‘That released energy could be ramming into all the material surrounding the magnetar, and that causes a shock and can accelerate particles that produce radio waves and a radio burst like we observe,’ said Dr Hessels.

To better answer this question, the ongoing MeerTRAP project is trying to find more FRBs, which might get us closer to an answer. The project uses the MeerKAT radio telescope array in South Africa to look for pulses of radio waves in the sky. During the array’s standard astronomical observations, the MeerTRAP team piggybacks onboard to obtain the data – about 10 gigabytes a second – to look for FRBs.

‘We just take data from where they have chosen to point,’ said Dr Benjamin Stappers from the University of Manchester, UK, and the project coordinator for MeerTRAP. ‘It doesn’t matter too much where the telescope is pointing, because they should be uniform across the sky.’

The project hasn’t started looking for FRBs yet, but plans to start doing so in July 2019. The MeerTRAP team hopes to find between two and five FRBs per week, with the possibility of looking for both FRBs that occur just once and repeating ones, as the telescopes will return to the same part of the sky on regular occasions.

'It’s not so often in astrophysics that there’s a new phenomena that we really don’t understand and we have the opportunity to learn something genuinely new.'

All of this data should help us better work out the origin of FRBs. ‘One way to work out what the cause of them is, is to understand where they happen in a galaxy, and what types of galaxies they happen in,’ said Dr Stappers.

Astronomers also want to work out how many types of FRB there are. So far, we know that some of them repeat and some do not, but how many repeat is still unknown. It could be that these two types are formed in different ways, so finding more of them could help us better answer that question.

‘There’s also the probability that FRBs will also pass through the outer regions of other galaxies that lie along the line of sight,’ said Dr Stappers. ‘So you can use them like shining a torch and see what happens to the light as it passes through those other galaxies. You can learn something about the nature of those intervening galaxies.’

The MeerTRAP project will also be looking for rapidly rotating neutron stars, called pulsars, to better test our theories of gravity. If a pulsar was found orbiting another star or even a black hole, the change in its rotation could tell us more about how gravity works at the extreme end of physics.

It’s FRBs, however, that are garnering the headlines at the moment. With more and more discoveries on the way, it’s hoped we might have an answer soon about some of their mysteries.

‘The field is really exploding,’ said Dr Hessels, noting we may know of more than 1,000 by the end of the year. ‘Probably in the next few years we will have a pretty good idea of what’s causing them.’