What’s the future of the welfare state? 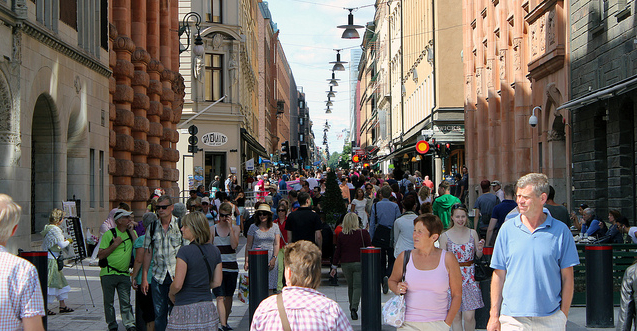 Researchers are coming up with recommendations for a fair and sustainable tax scheme that would increase the economic stability of EU Member States. Image credit: Flickr/ Fuzzy Mannerz

How should the welfare state evolve in the 21st century? Researchers are looking at everything from healthcare to immigration to design new systems fit for a post-crisis Europe that is facing challenges such as austerity economics, an ageing society and increased migration.

One issue is how governments can set up sustainable tax regimes across Europe.

‘The revenue of the state is the state,’ said Professor Åsa Gunnarsson from Umeå University in Sweden. She coordinates a project called FairTax, which is developing recommendations for a new EU fiscal policy where fair and sustainable reforms increase the economic stability of EU Member States.

Prof. Gunnarsson sees Europe’s fragmented fiscal landscape as the prime example of how connecting the EU’s market while keeping other responsibilities national lets down the very people that need protection.

Divergences in national tax laws and difficulties in enforcement across borders make it easier for citizens to stash their savings in bank accounts abroad. It also offers private companies leverage to negotiate their contributions to government coffers.

Although the European Union is the world’s largest economic bloc, its limited tax harmonisation allows international companies to cherry pick where they set up shop on the basis of which country offers them the best tax deal.

This lack of solidarity increases the burden on citizens and companies that abide by the original rules, eroding both financial contributions and faith in the welfare system as a whole.

‘FairTax is undertaking a comprehensive revision of EU fiscal policy to help put an end to this race to the bottom and establish a fair and sustainable tax system across the European Union,’ said Prof. Gunnarsson.

Although most taxation remains beyond the remit of EU institutions, Prof. Gunnarsson points out that voluntary codes, such as in business tax, have succeeded in initiating fiscal changes across Member States. Among its activities, FairTax is researching the legitimacy of such tools to build a common consolidated corporate tax base that would hold all companies in the EU to account by bringing together experts from different fields.

‘Contributions from fields as diverse as economics, fiscal sociology and, in particular, gender studies are offering social scientists a liberating way of tackling entrenched problems,’ she said.

‘Austerity, migration and mobility are just some of the realities that welfare states will have to face in 21st century.’

These advances are driven in part by necessity, in part by means. Never before have Europe’s welfare states faced such demographic or financial strains.

According to Professor Ellen Immergut, from the Humboldt University in Berlin, Germany, the solidarity on which European economies were rebuilt after the Second World War is coming under unprecedented pressure.

‘EU workers are growing older and the world around them is changing,’ she said. ‘Austerity, migration and mobility are just some of the realities that welfare states will have to face in (the) 21st century.’

Prof. Immergut is the scientific coordinator of Welfare State Futures, a network of 15 research projects which are looking at the design, delivery and experience of welfare in the 21st century. It is jointly funded by the EU and a network called NORFACE, which consists of funding agencies from no fewer than 15 countries.

The projects explore stresses ranging from austerity and demographics to European integration. Some projects have adopted small discussion groups and directly engaged with citizens and social workers to understand how they cope with social changes.

Others are focusing on the hot topic of migration, engaging with immigrant communities to gauge their sentiment about crossing national borders, and hearing how they are integrated into pension schemes, healthcare services, and unemployment and training schemes.

To date, there is little empirical evidence that can help estimate how welfare state benefits encourage immigration from within and beyond Europe’s borders, and on what will be the long-term economic consequences.

Prof Immergut’s own project in the network, HEALTHDOX, is aiming to assess how healthcare reforms across the EU have affected inequality, how much they cost taxpayers and how well they were received by patients.

Researchers are foraging through government records, parliamentary debates and ministry archives from every country in the EU in order to map out which healthcare measures were undertaken and why, before comparing these records with budget expenditures and the results of public opinion surveys.

‘Rigorous data is needed to understand how privatising health services changes public support for the health system,’ said Prof. Immergut. ‘There could well be cases in which it is both cheaper, and enhances social belonging for a community to mutualise them. We currently do not have the tools to check.’

She says that international collaboration has boosted the firepower of her own project as well as Welfare State Futures by allowing the comparison of data across EU Member States.

Interest in the recommendations the researchers come up with may also cross borders. As the world economy staggers out of its first recession since 1929, people everywhere remain anxious about their future well-being. According to Prof. Immergut, governments from Beijing to Washington are all looking in the same direction for inspiration on how to care for their populations.