What did Marie Skłodowska Curie ever do for us? 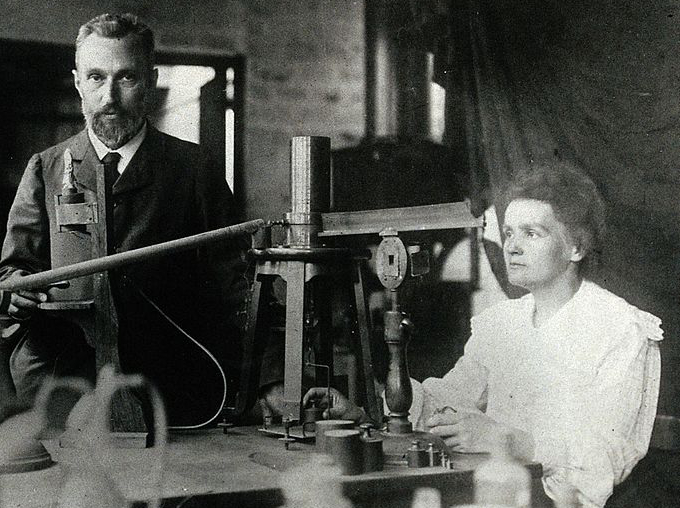 Today’s scientists build on the work Marie Skłodowska-Curie and her husband Pierre carried out in the field of radiation. Image credit: ‘Pierre and Marie Curie’ is in the public domain

One hundred years ago, Marie Skłodowska-Curie was using her scientific knowhow to organise fleets of radiology cars to carry portable X-ray equipment to wounded soldiers on the front line during World War I. Today, thousands of scientists working in fields as diverse as cancer treatment, archaeology and astrophysics continue to build on her work on radiation. As the European funding programme carrying her name celebrates 20 years of operation, Horizon takes a look at her scientific and personal legacy.

It is more than 80 years since Skłodowska-Curie’s death, but the name of the world’s most famous woman physicist is ubiquitous, adorning research institutes, hospitals, schools, prizes, charities and even an element.

Her image persists, too: most commonly, of a severely dressed lady stirring a cauldron of pitchblende in a draughty Parisian shed, haunted by the faint green glow of the radioactivity that was ultimately to kill her.

Why does Skłodowska-Curie capture the imagination so? She was a double Nobel Prize winner and one of only 48 women ever to win a Nobel Prize. She opened new fields in medicine, engineering and science. But her legacy was amplified by her activities as a humanitarian, an ambassador for science, and, not least, a pioneer for women in science.

Skłodowska-Curie and her husband, Pierre Curie, were fascinated by uranium salts which had been shown by their contemporary, Henri Becquerel, to naturally emit X-rays.

Pierre had invented instruments that could measure radiation and with these the Curies demonstrated that, no matter what form the uranium was in, it continued to radiate with an intensity proportional to the amount of uranium in the sample.

This convinced them that the radiation was coming not from any peripheral chemistry arising from molecular interactions but from deep within the atom – a startling idea because the atom was supposed to be the basic, indestructible building block of any element.

‘All medicine that relies on radioactivity – on irradiating people – goes back to Marie Curie.’

The idea of an unseen subatomic world from which radioactivity - as Skłodowska-Curie named it - came, was seized on by others. Her work kicked off a series of tumultuous discoveries and launched the field of atomic science.

With supplies of radioactive material from the Curies, for example, the physicist Ernest Rutherford developed a modern alchemy – proposing that some unstable elements naturally transmute into others, emitting radiation as they go.

Rutherford showed that such radioactive elements had half-lives – an indication of the time it took for them to decay – leading to the radiometric dating used today in fields from geology to archaeology.

Rutherford eventually devised a new model for the atom: mostly empty space, peppered with electrons, and a dense nucleus in the centre containing protons. And this set the scene for the web of discoveries about the power lurking within the atom that we know today as nuclear science.

The Curies shared the 1903 Nobel Prize in Physics with Becquerel. And Skłodowska-Curie won the Nobel Prize in Chemistry in 1911 for the discovery of radium and polonium and the isolation of radium, which provided science with a method for isolating and purifying radioactive isotopes.

Polonium has been used as a heater in space probes and an initiator for nuclear weapons, but it was radium that, with its alluring greenish glow, became the film-star element.

It was swiftly put to use in an array of notorious applications such as the illumination of clock faces and was seized on by doctors as a kind of multi-purpose therapeutic weapon against acne, varicose veins, epilepsy and more.

While much of this was misguided, doctors hit gold attacking cancer. Radiation could shrink tumours, while slivers of radium, applied directly in an approach known as brachytherapy, could do the same.

These techniques, in refined form, are widespread today, along with nuclear medicine, which images tumours by dosing patients with substances labelled with radioisotopes.

‘All medicine that relies on radioactivity – on irradiating people – goes back to Marie Curie,’ said Dr Spencer Weart, former director of the Center for History of Physics in Maryland, US. ‘She made the discovery that millions of people have since used.’

But this is not the only reason why some medical institutions bear Skłodowska-Curie’s name. Some refer to her actions during World War I, which added a tinge of Florence Nightingale to her reputation.

Disturbed at the quality of medical care for soldiers, she invented and resourced a fleet of radiology cars to carry X-ray technology to the front line.

‘It was almost an industrial project,’ said Dr Weart. ‘We must not overlook her administrative abilities.’

Marie Skłodowska was born into an occupied Poland on 7 November 1867. Her mother died early and her father was poor. For a while she studied at an illegal university for women in Warsaw and did secret chemistry experiments with her cousin at a museum.

Eventually she reached Paris, France, where some universities admitted women, and after a few years met and married Pierre Curie.

The two lacked money for a long time. Their discoveries emerged from a shed-like afterthought of a laboratory, open to the weather. Their work required hard physical labour, since uranium and radium had to be extracted from tonnes of black pitchblende where they lurked in tiny quantities.

Their fame grew and, after Pierre’s untimely death in a road accident, Skłodowska-Curie went on with her research and began to invest in the future of radiation science.

‘She parlayed her prestige into getting funding for the Radium Institute,’ said Dr Weart. It was her inspiration that led to the development of both the Institut Curie in Paris and the Radium Institute in Warsaw (now the Maria Skłodowska-Curie Memorial Cancer Center and Institute of Oncology).

Her teaching also left a lasting impact. She trained female teachers, overturning the rote-learning of their science curriculum in favour of hands-on experiments. Many of her students went on to become physicians, scientists and science teachers. And so her influence in opening women’s minds to the possibilities of a life in science – and thus opening science to women’s contributions – was profound.

‘The legacy in terms of attracting women to science is huge,’ says Dr Patricia Fara, a historian of science at Cambridge University, UK, whose first degree was in physics. ‘She was a fantastic role model for me when I was at school.’