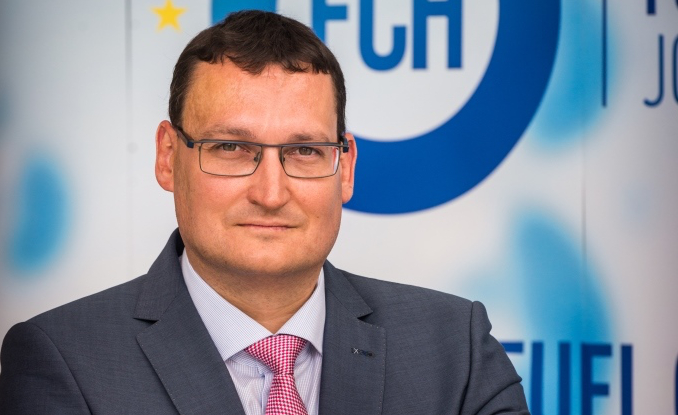 There are nearly 100 hydrogen buses on European roads, yet many people do not know hydrogen-fuelled vehicles are already on the market, according to Bart Biebuyck. Image courtesy of Bart Biebuyck

People don’t know that hydrogen-fuelled vehicles and home heating systems are already on the market, and that is the biggest obstacle to their uptake, according to Bart Biebuyck, the recently appointed executive director of the Fuel Cells and Hydrogen Joint Undertaking, a public-private partnership between the EU and the fuel cell and hydrogen industries.

Hydrogen fuel cells have been promoted as a zero-emission energy source because they convert hydrogen into electricity and the only by-product is water. What role do you think they will play in our future?

‘Hydrogen will play several roles in our future. For transport, we now see several manufacturers launching cars powered by electricity produced in a hydrogen fuel cell, and this will happen even more in the near future. Fuel cell buses are also an attractive solution for public transport. It is quite interesting to see that, in Europe, there are nearly 100 hydrogen buses on the road, which in comparison with the US and Japan, remains quite a significant amount. Then there are other applications for transport such as forklifts and boats, and engineers are now even starting to consider using fuel cells and hydrogen to power trains.

‘Hydrogen fuel cells offer lots of other possibilities and present a great potential for energy applications as well. For example, so-called micro combined heat and power (CHP) systems, which are fuel cells that can be used for residential applications, have the potential to reduce CO2 emissions when compared to a gas condensing boiler.

‘Hydrogen will also play an increasing role in energy storage. For example, a windmill is likely to generate too much electricity in strong winds and would need to shut down. Instead of shutting it down, the excess energy could be used to produce hydrogen by passing it through water. This could then be used for transport or other purposes.’

Where are we now?

‘We see now the first products coming onto the market. Cars and buses have been ready for several years now and micro CHP units are starting to become more popular. Of course, this is still an expensive technology, and a technology that needs further development. Therefore, in the coming years, we will still need to invest to find ways to reduce costs in order for this technology to be able to compete with regular technologies.’

What are the major obstacles to overcome before hydrogen fuel cell technology is rolled out to the mass market?

‘I feel that fuel cells and hydrogen technology is not really known by most people and we need to make sure the message gets to many people. When I talk to people in the street, they still think of it as something which is about 10 or 20 years away and this is wrong. It’s there today and they can buy it if they want it. I think the bus project is a very good example to demonstrate this. We have feedback from people who use hydrogen buses frequently and passengers get enthusiastic about the low noise level and the environmental aspect. These are the ambassadors and we need them to spread the word.’

Are there any other issues to iron out?

‘The cost is very high and that’s mainly for products like cars, buses and micro CHPs. There is a need to generate more volume, there must be more cars, more buses, in order to create economies of scale. In addition, there is also the need to standardise, as this is also key to enable cost reduction.’

‘The advantages are very clear: zero-emissions and long range.’

How would you sell a hydrogen car to someone?

‘The advantages are very clear: zero-emissions and long range. Hydrogen-powered cars are comparable to conventional vehicles in terms of range and refuelling times. However, the biggest advantage is that there are no emissions, the only by-product being water. People like their comfort, they like their way of living, so they don’t want to change that. But, simultaneously, there is a growing consciousness of the need to address environmental issues. Well, this car can do both. I think that’s the beautiful thing about fuel cell cars.’

Hydrogen is often produced from natural gas, are you also looking at renewable sources?

‘Of course hydrogen has to be green, we need to focus on hydrogen from renewables. It’s true that hydrogen that is now produced from renewables is still very low, it is around 4 %. One of the reasons is that the cost has to go down and the efficiency still has to improve. Thanks to the work of the Fuel Cells and Hydrogen Joint Undertaking, new technologies can be developed to further reduce the cost, improve efficiency and optimise, therefore, the use of renewables.

‘We support a very interesting project here in Belgium, called Don Quichote, which features a hydrogen plant located at the distribution centre of the supermarket company Colruyt Group. The plant includes solar panels and windmills and generates electricity that way. This electricity is then converted into hydrogen and used for Colruyt’s forklifts in its distribution centre. It also means people can refuel their cars at the centre. This is a perfect example of how an integrated hydrogen plant allows for a complete cycle of energy production and distribution using hydrogen. I believe we will see more and more of these kinds of cases, where establishments generate their own electricity and make use of hydrogen it produces.’