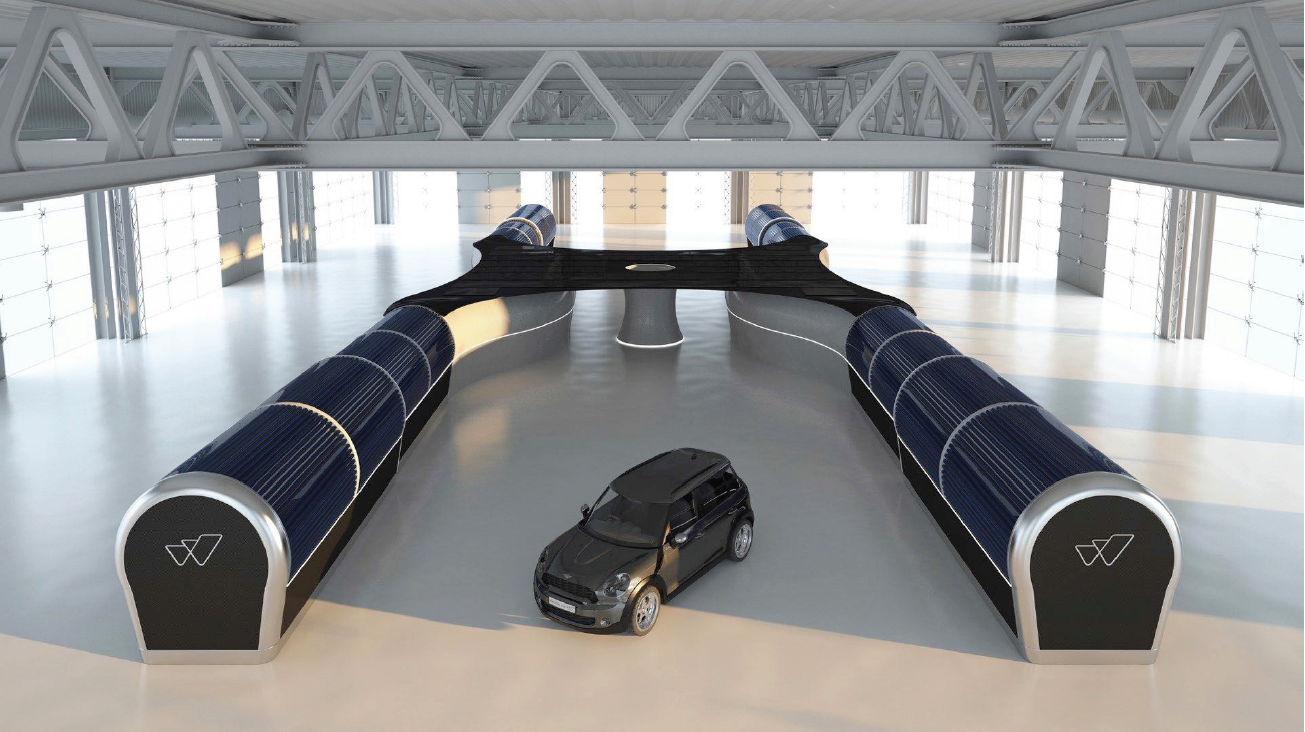 Watly can purify up to 5 000 litres of water a day while also providing electricity and wi-fi. Image courtesy of Watly

It would look at home in a space colony, but a prototype has been tested in a rural village in Ghana.

This futuristic machine is called Watly, and it harnesses the heat and light of the sun to deliver clean water, electricity and the internet to regions missing out on these 21st-century essentials.

Water supply is the number one risk facing society, according to the World Economic Forum. Water problems contribute 88 % of deaths from diarrheal disease, which kills over 800 000 children under five around the world every year.

And over 1 billion people live in places where water is scarce, a problem that could be exacerbated with climate change. One study suggests that in the coming decades it could cause a further one billion people in Asia alone to suffer water shortages.

Watly – whose name was partially inspired by WALL-E, the eco-friendly cleaner robot which wowed audiences in the 2008 Pixar film of the same name – can purify 5 000 litres of dirty water a day.

‘I do not accept that people can be without clean water, or access to electricity,’ says Marco Attisani, chief executive of Watly, the Italian-Spanish start-up company behind the machine.

Over 600 million people in sub-Saharan Africa are without electricity. However, Watly could help change that. Locals can plug into the H-shaped machine to recharge phones and other devices, while it can generate wireless internet coverage over hundreds of metres.

The device can be customised for a specific region or village, hosting webcams, touch screens, digital and facial recognition systems, movement sensors and even a 3D printer.

‘This unit is special because it is capable of doing desalination.’

Watly works by heating untreated water to 50 degrees Celsius and pre-treating it with graphene, a high-tech material that acts like a sponge, soaking up any soaps or oily hydrocarbons. Then it boils the water under pressure and distils it using solar heat.

‘You can feed in water coming from the ocean and it desalinates it, or you could use pond water or polluted river water or even sewage,’ says Attisani.

Andy Bastable, head of water and sanitation at the charity Oxfam said that the salt issue is critical.

‘This unit is special because it is capable of doing desalination,’ he said.

Parts of the Horn of Africa – including north Kenya, Somalia, southern Ethiopia and northern Uganda – are becoming more drought-prone and the salinity of water is increasing. Salinity is also a huge issue for water supply in parts of Bangladesh, Myanmar, India, Cambodia and Vietnam.

Two in three Africans, around 621 million in total, are without access to electricity. Because of the financial and logistical challenges of connecting rural areas up to a centralised electricity grid, off-grid and mini-grid solutions are predicted to play a large role in Africa’s future energy supply.

The EU and Africa work together on science, technology and innovation as part of the Joint Africa-EU Strategy, which aims to strengthen economic cooperation and promote sustainable development. The high-level policy dialogue, set up in 2010, allows regular exchanges about policies and priorities.

The Africa-EU Energy Partnership is one of eight partnerships under the Joint Africa-EU Strategy. It will help meet the energy needs of the future by promoting knowledge-sharing and policy links between the two continents.

However, Bastable also cautions that the cost will be critical to Watly's success. An analysis for Oxfam noted that the performance of a production model would need to be proven in rigorous tests and put a question mark over the price of what is a heavily engineered, impressive piece of kit.

Earlier this year, a prototype was taken to Abenta in Ghana, where locals had previously needed to take their drinking water from a pond.

‘It was an amazing human experience,’ Watly’s Attisani said. ‘You could see it in the eyes of the people. They were waiting for this machine and thanked us. It was a revolutionary feeling.’

Still, getting to that point has been hard work for Attisani and his entrepreneurial team.

‘Creating a company is like going to conquer America in a wooden boat,’ he said. ‘Anything can happen.’

At first they struggled to get venture capitalists fired up about the idea, until they secured a EUR 1.5 million grant from the EU, which Attisani described as a ‘game changer’.

With the backing of public funds, the company attracted attention from private investors. It also helped that it had won a number of awards for innovation.

The team they built now eagerly anticipates the big roll-out this July, when a full-sized 15-tonne, 40-metre Watly machine is to be unveiled outside the company’s facility in northeast Italy.

Contacts and emails flow in each day from around the world, including Ecuador, Brazil, Malaysia, Thailand, India, China, Australia, Saudi Arabia, Senegal, South Africa and Ethiopia. Attisani says they are now in talks with venture capitalists in the UK and the US. The company hopes to install thousands of its machines across Africa alone over the next decade.