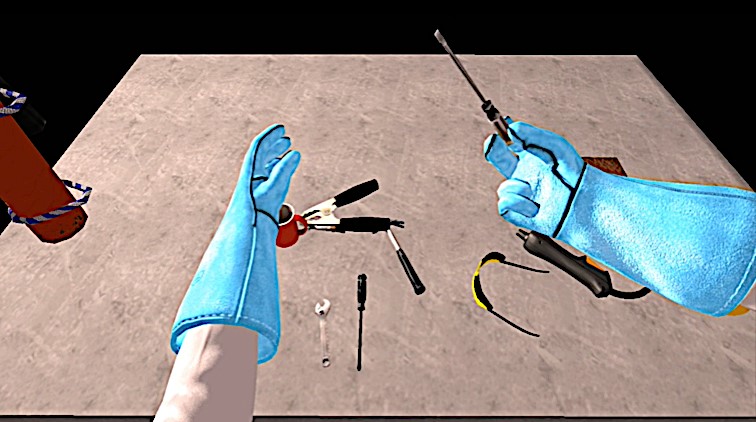 Smartphones are changing the game for entrepreneurs and innovators, cutting out the need for expensive equipment and enabling them to place technologies such as virtual reality how-to manuals and broadband service for aircraft passengers directly into our pockets.

‘We have created a programme that is installed in a handset … that can be an alternative for training,’ said Adrien Girard, from the French Alternative Energies and Atomic Energy Commission, who has developed a simulated virtual assembly line that works through a smartphone.

As part of the Handcode project, funded by EIT Digital, Girard and his team programmed the phone so that when the user moves their hands the virtual hands on the screen mimic the same action.

Virtual reality could help train assembly line operators and check if their movements are ergonomic.

It’s one of a new breed of innovations that have emerged from a relatively low-cost business model – a good idea, laptop and mobile phone – and which were on display at Delivering Europe's Digital Transformation, a conference in Brussels organised by EIT Digital, a Knowledge and Innovation Community (KIC) supported by the EU’s European Institute of Innovation and Technology (EIT).

‘Anyone can take a project that they care a lot about and make it into a business just as long as you have a laptop and internet connection,’ Karen Boers, co-founder of Startups.be and chief executive of the European Startup Network in Belgium, told the event.

‘It has become possible for many to start and grow up a business and that’s a huge opportunity.’

Physiotherapist Kiki Coppelmans co-founded inMotion VR, a Dutch company that is commercialising virtual reality simulations that can be used to treat severe neck injuries or back pain through interactive games on a smartphone.

‘Anyone can take a project that they care a lot about and make it into a business just as long as you have a laptop and internet connection.’

With a headset, mobile phone and an app, a patient is provided with distraction from their pain through games that encourage them to exercise problem areas in their body that ordinarily they would be reluctant to move.

‘They play mini-games in simulated worlds and the 3D glasses measure all the movements of the cervical spine,’ said Coppelmans.

‘At the end of each exercise you can see where the limitations are and at that point the patient just gets another game and they don’t realise that they are feeling any pain because they are so immersed in that VR (virtual reality) world.’

A pilot scheme for inMotion VR has already been launched with 20 different practices in the Netherlands and at least 100 patients have used this technique.

‘The smartphone is nowadays known as the platform of almost anything,’ Henry Tirri, a former Nokia engineer, told the event in Brussels.

‘It is the Swiss army knife of digital life.’

Even the days of putting your phone in flight mode could be numbered, as the team at ICARO-EU, another project funded by EIT Digital, are aspiring to enable high-speed broadband and cellular network coverage for aircraft passengers.

Traditional satellite connection used by airlines could be a thing of the past as the developers in Sweden are working on a technology that taps into the terrestrial broadband signal, known as Broadband Direct Air-to-Ground Communications technology (BDA2GC).

This means that in the future, there may never be a reason to switch off and our obsession with mobile phones in both innovation and everyday life may only continue.

The European Institute of Innovation & Technology

The EIT was set up in 2008 in order to spur innovation and entrepreneurship across Europe.

The idea is to form partnerships between universities, research labs and companies to help develop new products and services, start new companies and train new entrepreneurs.

They do this through so-called Knowledge and Innovation Communities (KICs), such as EIT Digital, which run training and education programmes, business incubators and innovation projects.

The EIT has been allocated more than EUR 2.4 billion from Horizon 2020 funding to achieve its goals and further develop its activities between 2014 and 2020.

European Institute of Innovation and Technology