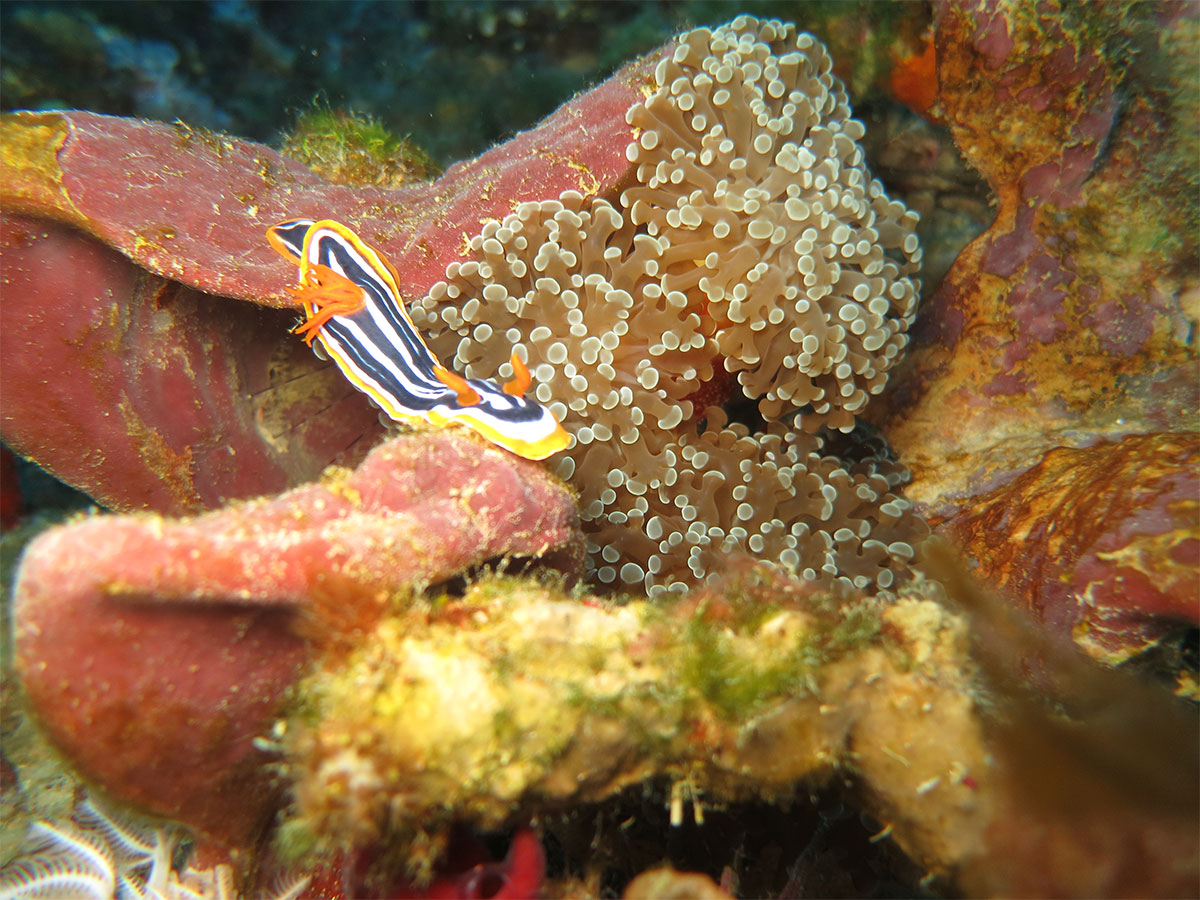 Mesophotic coral ecosystems, found 30-150m below the sea in tropical and subtropical regions, could make up half of all reefs worldwide but there is little known about them. Image credit - Gal Eyal

‘The change is tremendous,’ said Dr Eyal, a marine ecologist at Bar-Ilan University in Israel and the University of Queensland in Australia. ‘I was at the Great Barrier Reef for the first time in 2004 ... When you dive down and see this coral bleaching, it’s crazy. You see all the reef that you used to see colourful and full of fish all bleached and white … and it’s like a graveyard.’

A major environmental puzzle in recent years has been how to mitigate the devastating impact that climate change, pollution and other human effects are having on coral reefs – with huge losses already, and alarming forecasts that 70% to 90% of existing reefs may die in the next 20 years.

Rather than focusing only on traditional clear-water shallow reefs down to about 30 metres, some researchers are looking at habitats in both deeper and turbid waters – environments where corals still depend on light to support photosynthesis by the algal partners they need to sustain them, but at a lower level.

An expanding body of evidence suggests such areas could be key to reseeding degraded reefs in future, as well as being crucial ecosystems for ocean health.

Reefs known as mesophotic coral ecosystems (MCEs) are found 30 to 150 metres down in tropical and subtropical regions, but have often been missed in studies between exploration of much more accessible shallow corals and the deeper sea.

This is despite these ecosystems containing massive reef structures, with some studies estimating that MCEs make up half or more of reef area worldwide. Earlier research has also suggested they bleach less than shallow corals, living in habitats with lower natural fluctuations or influence from human impacts.

The Mesophotic project, which Dr Eyal leads, is looking at these habitats to build a base for understanding not just about their immediate outlook, but their prospects for the coming hundreds or even thousands of years.

‘We know very little about these reefs, and we don’t really know what the effects of thermal stress, pollution and competition between species are on them,’ he said. ‘If people don’t look at the reef as a whole, from shallow to deep, they miss a lot.’

In an examination of almost 100 mesophotic coral species off the city of Eilat at the northern tip of the Red Sea, Dr Eyal says his team was surprised to discover just how many species lived in both habitats, with around two-thirds of the known species in the region’s shallow reefs also appearing in the mesophotic zone.

‘If you look only at the shallow reef, you don’t look at the big picture but only the tip of the iceberg.’

This suggests significant transfer of reproductive propagules - parts of the coral that break off and become new corals - between the two habitats. It also supports the hypothesis that deeper reefs could act as a refuge and a source for repopulating their shallower counterparts through natural reseeding after catastrophic events such as widespread bleaching or pollution.

Indeed, when the researchers transplanted fragments of the mesophotic coral Euphyllia paradivisa from a depth of 50 metres to five metres, survival rates were high after three years and there was evidence that the corals had acclimatised to the higher light levels – though Dr Eyal cautions about the results because only adults were transplanted rather than larvae or juveniles.

In addition, they found species that were rare at shallow depths but flourished in mesophotic waters, including E. paradivisa, which some environmental bodies had considered threatened in certain areas of the world. Leptoseris glabra, originally thought scarce due to its rarity on shallow reefs, appeared to be the most abundant species in the northern Gulf of Eilat, being widespread at mesophotic depths.

Such findings may support improved targeting of species for conservation efforts on both mesophotic and shallow reefs, as well as inform decisions on marine protected areas and educate the public about whole reef ecosystems, says Dr Eyal.

‘In the mesophotic zone there is huge species diversity, and a mixture of generalist species and mesophotic specialists,’ he said. ‘If you look only at the shallow reef, you don’t look at the big picture but only the tip of the iceberg. You need to look at all the iceberg to verify where to act to protect the whole environment.’

To aid researchers globally, the team has developed an online application that allows users to enter light-related data to approximate shifts in community structure at different depths, which Dr Eyal says seems so far to translate well to other areas of the world.

Mesophotic is also looking at how coral communities have changed over time by taking cores from reef sediments to investigate whether species common in the mesophotic zone previously migrated from the shallows when environmental conditions altered.

‘We are trying to verify if these past events can tell us something about what will happen in the future,’ said Dr Eyal. 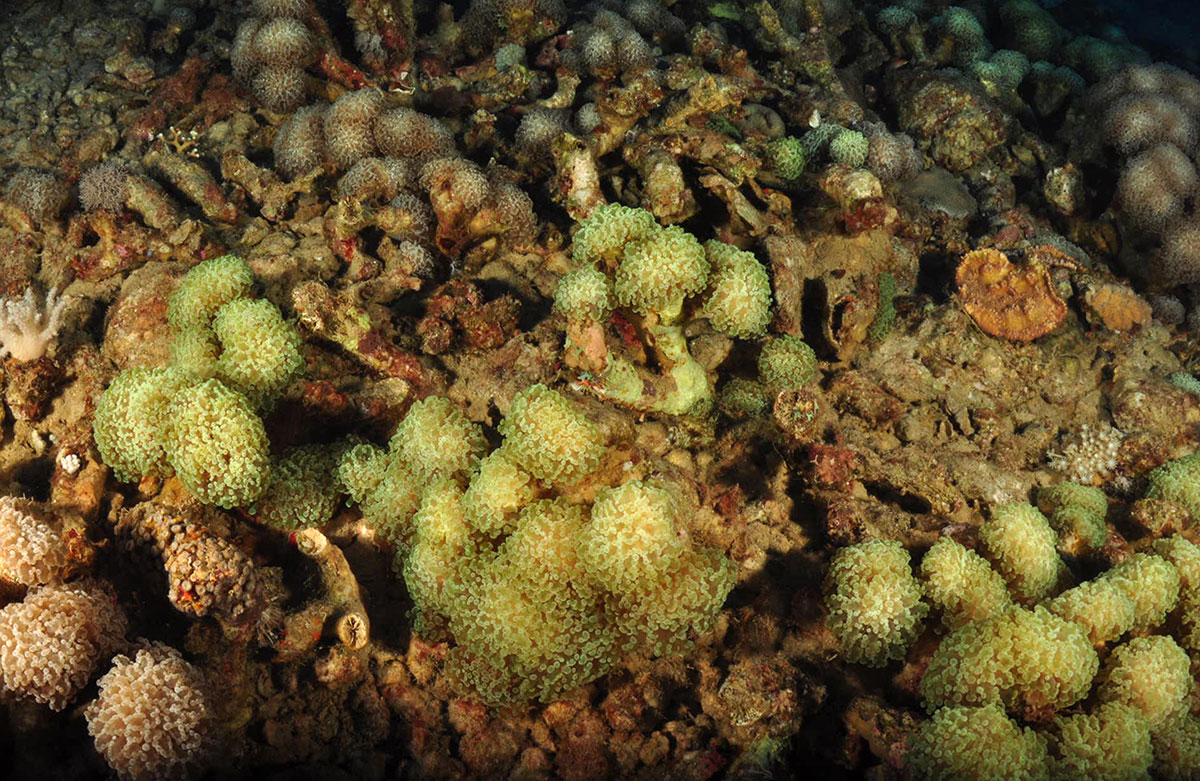 Due to the challenge of taking cores at such depths with the currently available equipment, the results are so far limited to the last couple of hundred years and highly localised, but he said there is evidence of such transitions before. Meanwhile, photos he is comparing from the past 40 years suggest mesophotic reefs have changed little in the very recent past.

But though these reefs appear to show promise as refugia and are historically considered stable, Dr Eyal says his own research has suggested that anthropogenic disturbances such as pollution may have a bigger impact on MCEs than shallow reefs due to them being adapted to a more predictable environment.

The complexity created by hugely varying reef environments means there is much research still to do. ‘You have huge differences in conditions … and it’s not only between different reefs around the world, it’s in each reef environment,’ said Dr Eyal.

Other researchers are looking at turbid reef environments found at shallow depths and characterised by high levels of terrestrial runoff. Many of these are found in the Coral Triangle, an area roughly spanning the waters off Indonesia, Malaysia, the Philippines and Papua New Guinea in the west Pacific.

The area is home to the world’s most diverse reef habitat, containing 75% of known coral species. It is also close to many huge populations that depend on the reefs for sustenance, providing an ideal study site for ongoing anthropogenic change.

From previous analysis of the fossil record, a project called 4D-REEF, which is studying these systems, hypothesises that coral reefs probably originally evolved in murky waters and that those in such environments may be better placed to handle disturbances in the ocean.

In addition, earlier research by the team and others suggests there is less bleaching on turbid reefs due to lower exposure to light stress, and that they may recover faster from disruptions, says Dr Willem Renema, project lead and a marine biodiversity researcher at the Naturalis Biodiversity Center in Leiden, the Netherlands.

‘The idea we’re exploring here is that maybe those high-light environments in what we see as the most typical coral reefs you can imagine are geologically (over large timescales) atypical,’ he said. ‘We have a knowledge gap in these turbid water reefs because few people have been really studying them in high intensity.’

A year in, most of the work has comprised reviews of research and method development, with the pandemic causing delays in getting out to the reefs themselves. Dr Renema hopes dives can begin next March or April.

A large part of 4D-REEF involves analysing fossils collected already to investigate what coral habitats previously looked like and how they dealt with environmental change.

The researchers are homing in on the Pliocene epoch between 5.3 and 2.6 million years ago – a period during which warming conditions are often used to provide an analogue for climate change today – and the current Holocene epoch prior to significant anthropogenic impact.

This may also help elucidate founder species that gave rise to reefs in the past, potentially giving ideas on which to use for future rehabilitation projects, says Dr Renema, though there are no real results from these studies yet.

‘(We’re looking at) what are the dynamics in these ecosystems? Can we model their response to changing sea level, changing temperatures and so on?’

For Dr Renema, studying different coral environments – from those at mesophotic depths to those in turbid waters – is crucial to getting a proper handle on how best to protect the whole reef environment.

‘You cannot say we only look at the five-metre depth line and then you understand what coral reefs are,’ he said. ‘We have to understand the entire system.’