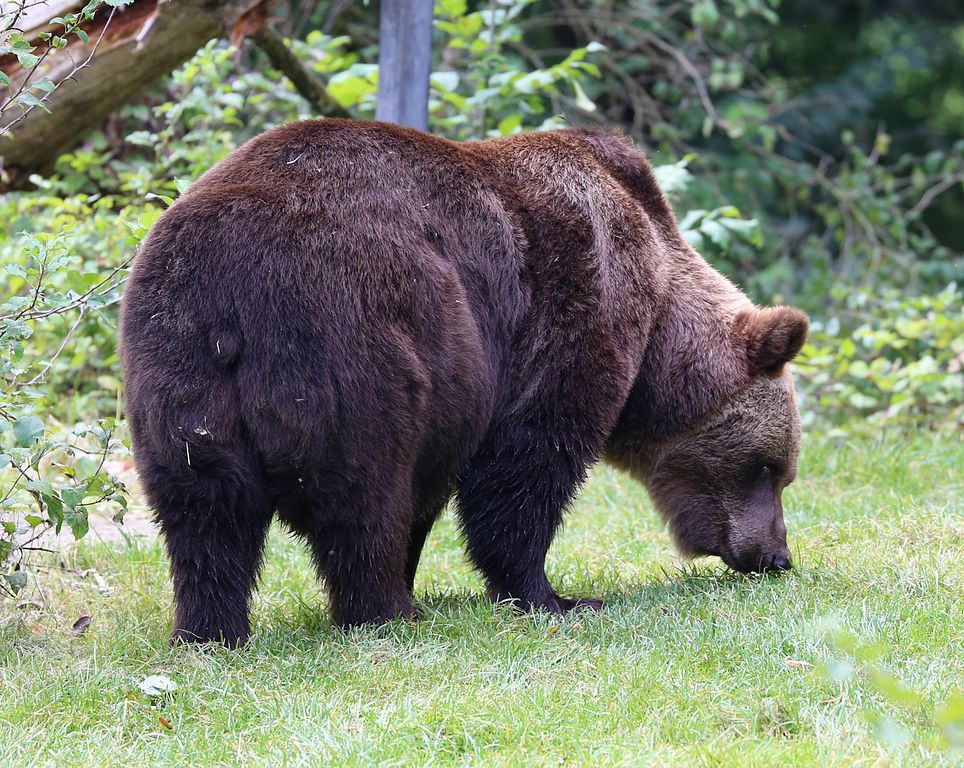 Brown bears show individuality in the distance they travel each day, their preference for daytime or night-time movement and other behaviours, according to research. Image credit - Rufus46, licensed under CC BY-SA 3.0

The brown bear is one of Europe’s five large carnivores and can sometimes cross paths with people, with potentially fatal consequences. But bears have different personalities and behaviours, say researchers, and understanding this is the key to reducing conflict and protecting both them and humans.

Brown bears once thrived in woodlands throughout Europe, but human persecution decimated their numbers. Today, populations are highest in mountainous rural regions close to the Balkans and Carpathian Mountains, which are home to around 12,000 of Europe’s 17,000 brown bears.

With greater legal protections, bears are recovering and recolonising landscapes, such as the Alps and Pyrenees. The challenge now is in managing co-existence of people and carnivores, as brown bears prey on livestock, raid beehives and sometimes pose a threat to people.

In Romania, home to an estimated 6,000 bears, they may enter villages, towns, even cities. They can maim or kill people, with brown bears being responsible for multiple deaths in 2019.

People are also a problem for the bears. ‘We have this return of large carnivores often returning to landscapes that are human dominated and that is a challenge for many of the carnivores themselves,’ said Professor Thomas Mueller, an expert in animal movements at the Senckenberg Biodiversity and Climate Research Centre in Frankfurt, Germany.

According to Dr Anne Hertel, who studies bear behaviour as part of Prof Mueller’s group, this needs to be done at an individual level. As part of her PhD studies at the Norwegian University of Life Sciences, she tracked bear movements in Swedish forests, examining how they foraged, avoided humans and selected areas to live.

Bears hibernate in dens from November to April, when females give birth to cubs. Females stay with their mothers for around two years and set up home nearby, whereas males disperse much further. Dr Hertel never once chanced upon a wild bear in Sweden.

‘They avoid humans at all cost, which makes studying their personality hard,’ she explained. She relied on movement data from radio-collared bears, generally captured as cubs with their mother in their second year. Before release, a sample of hair was taken.

By tracking 46 adult brown bears, she identified six ways in which bears’ behaviour can vary: the distance they travel per day, the distance between where they began and where they ended up each day, their preference for night-time or day-time movement, and whether they liked or avoided open areas including roads, bogs and forest clearings.

‘We find that bear behaviour is consistent over time, with some more active in daytime, and some selecting habitat closer to roads, or more open habitat such as bogs and clear-cut forest,’ Dr Hertel said. ‘Bears are quite different from each other. Nocturnal bears tend to be quite sedentary, while others more active during daytime move a lot.’ 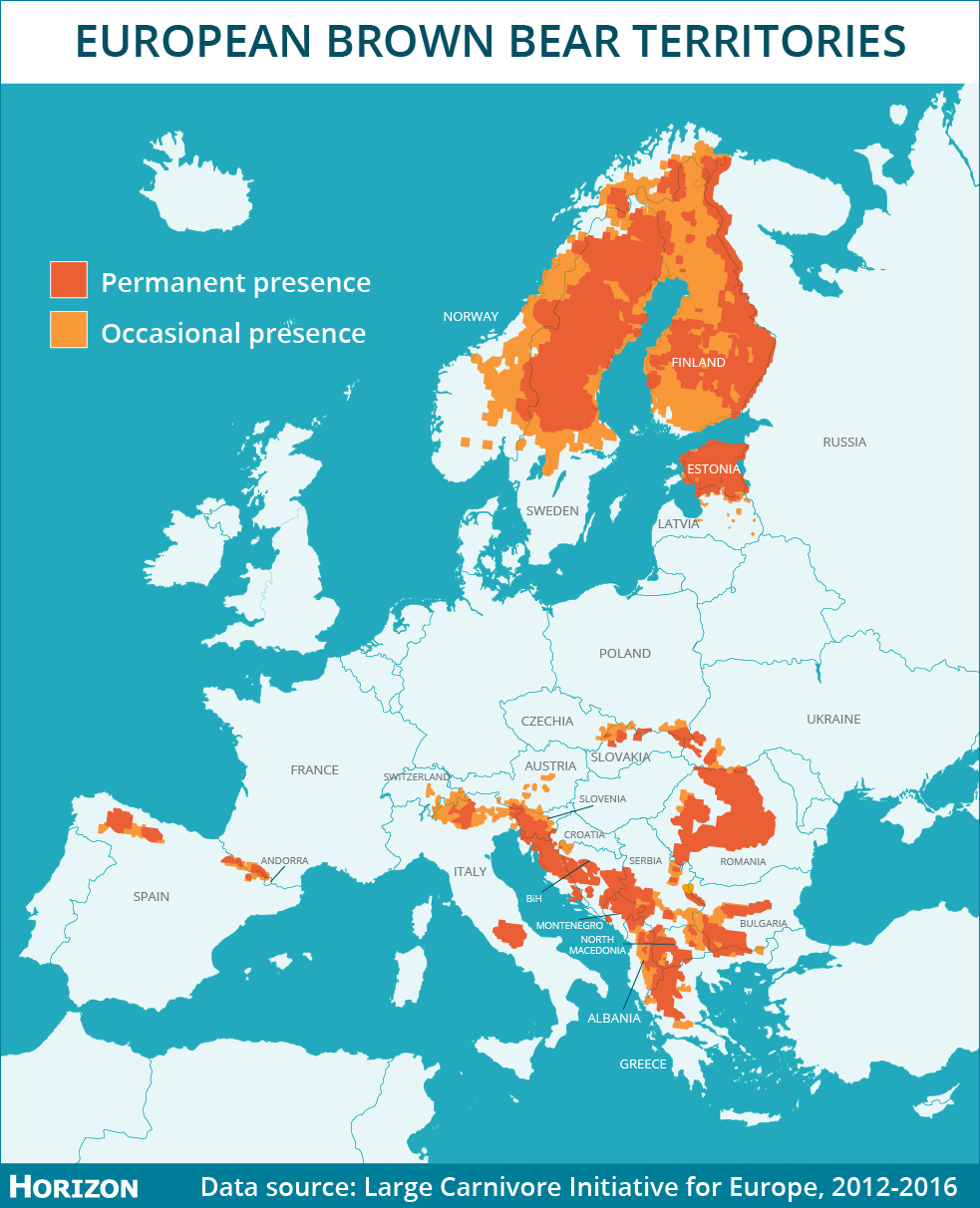 Swedish bears eat mostly forest berries, but some have a higher meat intake, preying on young moose. Dr Hertel is determining which bears eat more meat by examining a chemical signature in the hair collected. ‘Our next step is to see whether carnivory is a trait which can be learnt from their mother,’ she said.

She is also trying to work out how individuality in behaviour can change over time through learning, or remain stable, and whether it can be predicted, as part of a project called PERSONALMOVE. Her findings could feed into predictions of bear movements, especially of young males which disperse to establish new territories, and help understand which ones are most likely to move through areas where people live.

Whether findings from Sweden can be translated to other parts of Europe, such as Romania, is unclear as conditions are different and there is very little data to test the hypothesis, says Dr Hertel.

‘Romania is one country in Europe which has the most bears by far, and they have more conflict in terms of them entering human settlements and causing problems,’ she said. She believes that this conflict stems from a combination of bear behavioural traits, opportunities for them to feed on foods like human trash and management techniques.

Romania traditionally allowed bear hunting, but when it entered the EU in 2007, bears became a protected species. Hunting was banned altogether in 2016, but it is difficult to know the effect this has had on bear populations as there is no data available.

‘Previously, populations were managed in order to maximise hunting bags,’ said Dr Valeria Salvatori at the Istituto di Ecologia Applicata in Italy. ‘The population of bears in Romania has been maintained at artificially high levels through artificial feeding for decades.’

Forestry activity has risen since the country joined the EU, and some suggest that disturbance is driving bears out to search villages for food. But Dr Salvatori had first seen bears eating from city garbage dumps almost two decades ago, when she did PhD research in the Carpathians.

While pro-hunting groups highlight conflicts between bears and people, Dr Salvatori says that in rural areas, attitudes towards bears are not negative.

In places such as Hargita, a hotspot for bears in Transylvania, people believe that the current situation and the damage being caused by bears is not sustainable, but they are used to bears and often seek to explain and even excuse bear behaviour when conflict arises, says Dr Salvatori.

'Nocturnal bears tend to be quite sedentary, while others more active during daytime move a lot.'

‘The general attitude is that it is normal to have bears, but that encounters with bears should be better managed,’ Dr Salvatori said. ‘There is no strong opposition to using hunting as a management tool, provided that it is not detrimental to their population.’ Also, people felt that bear tourism needed to be better regulated.

Her workshops generated various recommendations to avoid conflicts with bears and stop them raiding beehives and crops and killing livestock, such as securing bins in bear areas, and putting up electric fences in touristic spots.

Another, more individual, option highlighted by Dr Hertel is hazing, where specific problem bears are targeted with rubber bullets or dogs to deter them from people.

EU Platform on Coexistence between People and Large Carnivores