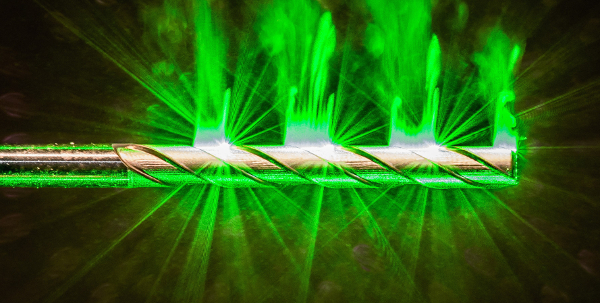 Engineers are using laser pulses that last 10 trillionths of a second and self-learning cooling systems to craft new diamond tools that are more durable and efficient than ever before.

Diamonds come top of Mohs scale of mineral hardness, which ranks materials according to their ability to scratch another one. Besides leading to brilliant gemstones, that property means they are ideal for cutting and drilling other materials.

But it also means that sculpting the diamonds themselves into industrial tools presents a tricky problem. How do you cut one of the hardest materials in the world?

The answer is lasers.

‘Any mechanical tool has to be harder than the workpiece,’ explained Maximilian Warhanek, a manufacturing expert and project coordinator for the EU-funded DIPLAT project.

Researchers on the DIPLAT project, led by Switzerland’s ETH Zürich university, are developing a method to cut diamond with ultra-short pulsed lasers, and have already produced several prototypes for milling, grinding, and drilling tools.

‘The laser … doesn’t care at all about the hardness. It can cut through diamond at the same rate as any soft metal,’ said Warhanek.

That’s due to the way lasers work versus conventional cutting. When a drill or grinder pushes into the surface of a workpiece, the material deforms around it under the intense pressure. Friction heat is produced and induces cracks, which eventually break the material in the form of a cut.

For that to work, however, the drill needs to be harder than the object material to push its atoms out of the way.

But lasers are different. They use powerful beams of light that heat up molecules in the target object to such an extent that atomic bonds are pulled apart, and material is vaporised. Yet that heating can also create problems.

The main difficulty the team needed to overcome was how to create a setup where lasers could move quickly enough that they didn’t overheat and damage the diamond.

At about 800 degrees Celsius, diamond decays to graphite, the material commonly used in pencils. Not very good for making drilling tools.

They overcame that partly by using ultra-short pulses of 50-Watt lasers lasting just 10 picoseconds, or 10 trillionths of a second.

‘We are able to remove material faster than heat can spread inside the material, which means if you do it right, the diamond stays cold,’ Warhanek said.

The other way to avoid heat damage is by moving the laser around quickly. To do this, the researchers created a work surface capable of moving a tool around five mechanical directions, including twisting the object, along with a laser scan head that could move the laser beam another three directions.

‘We are really doing pioneer work,’ Warhanek said. ‘The scan head is mirrors that are actually moved very fast to move the laser up to three metres per second, with several thousand g’s of acceleration, which is at least a factor of 100 faster than any mechanical axis could achieve.’

The project is already selling its laser sculpting tools, and Warhanek has launched a startup, along with some other DIPLAT partners, to further use the technology to cut ceramic materials like zirconium dioxide, commonly used in medical implants.

The researchers are also eager to make use of their Swiss location for future opportunities.

‘It can cut through diamond at the same rate as any soft metal.’

‘There’s a huge trend in Switzerland for ceramic watches,’ Warhanek said. ‘We are talking, for example, with one of the big Swiss watchmaking companies about a project next year to really find the limits of what’s possible with these drill bits and milling tools.

‘Right now, the design is limited by the current process which is mainly grinding, but if they have new tools which have new capabilities, then they could maybe reinvent some of their parts.’

Even after they are manufactured, overheating can create problems for tools. However, researchers on the EU-funded CONTEMP project have now come up with a way to help tools dissipate heat faster with an internal cooling system.

‘When you take a look at the cutting process, currently the industry is injecting hazardous cooling lubricant from external nozzles right into the processing zone. In the CONTEMP project, we thought … we’ll take the cooling process and put it right into the tool,’ said project researcher Paul Fürstmann from the Technical University of Berlin, Germany.

While lubricants can be used to keep cutting tools cool, they are unable to avoid thermal shock - where different parts of the material expand by different amounts, causing stress - and can create industrial waste when they become contaminated.

Engineers on the project designed a way to use a mixture of water and ethanol that the tool could regulate on its own using a self-learning system. That means the tool can save energy by pumping only when it needs extra cooling.

The precise heat control also means that, in the future, diamond-coated cutting tools could be used to machine an expanded range of hard materials, including titanium alloys or carbon-fibre reinforced plastics.