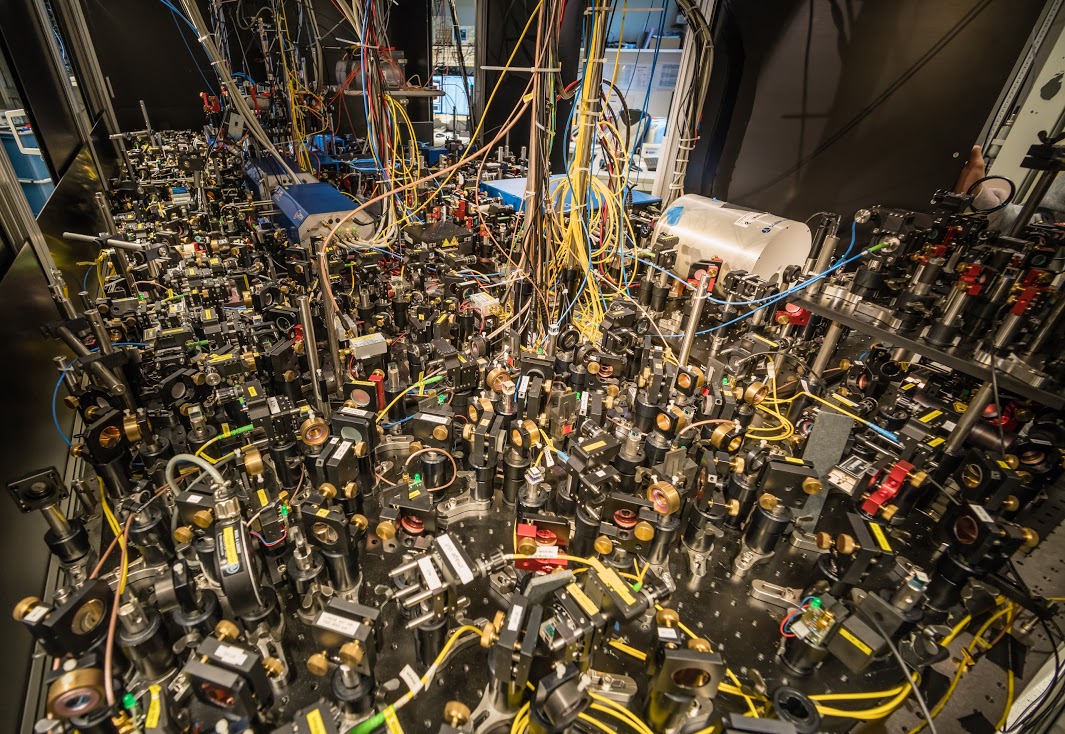 Researchers are cooling atoms at a laboratory in Garching, Germany, to better understand how they behave. Image courtesy of Immanuel Bloch

By cooling atoms to ultra-cold temperatures, researchers can watch interactions in slow motion and the results are giving them a new perspective into the behaviour of matter at the quantum level.

The closer you look at something, the more strangely it behaves. The smallest known particles, such as photons and electrons, follow their own rules of behaviour described as quantum physics.

Now, scientists are developing ways of watching these tiny particles in slow motion, opening a new window into this mysterious world. Understanding more about quantum behaviour has applications as diverse as high speed computing and better solar cells.

At the atomic level, heat is nothing more than the extent by which atoms move. The heat in a scalding cup of coffee is actually caused by the atoms that make up the drink moving, spinning, or shaking at a faster rate than the comparatively slower atoms in a cold coffee.

Atoms will move less as the environment becomes colder, coming to a complete standstill at absolute zero (0° Kelvin, or -273.25° Celsius).

‘Nothing mixes, nothing moves, so you cannot even define the temperature.’

The UQUAM project, funded by the EU’s European Research Council (ERC), cools atoms to near this temperature in order to see how they behave and how we may control these near-still atoms.

‘Ultra-cold atoms give you a big advantage in that they give you amazing control over interactions and the measurements you make on the system,’ said Professor Ehud Altman, one of four principal investigators in the project.

‘Everything evolves in time slowly and you can really watch the evolution in real time, you can measure things in a more detailed way than you can measure with any other system,’ he said.

Prof. Altman heads a theoretical research group at the Weizmann Institute of Science, Israel. The group focuses on theoretical aspects of ultra-cold atoms which can be tested in UQUAM’s experimental centres in Germany and France.

Since ultra-cold atoms can be controlled and monitored better, Prof. Altman believes they can answer questions about how atoms behave at the border of everyday and quantum physics.

‘Questions, for example, of whether when one does an experiment at increasingly long time, (do) the quantum effects decay or survive in this system?’ he said.

The process of ultra-cooling atoms is usually done in two main ways, laser cooling, which uses lasers to slow down an atom, and evaporative cooling, which traps atoms in an electromagnetic ‘jar’ which helps atoms to shed their energy.

How to super-cool an atom

Once the atoms are cool enough, the researchers place them in a special grid of lasers that hold them in place in an ordered way, like eggs in a carton, or in a random landscape.

Though many of the major experiments are still ongoing, he says the project has already had an intriguing result, by providing confirmation of behaviour that had previously only been predicted by theory.

Normally, many regular interacting atoms will swirl around and mix in a system, losing all memory of their previous state. However, ultra-cold atoms do not do this, a phenomenon known as ‘many-body localisation’.

Prof. Altman compares the experiment to pouring milk into a cup of coffee. While we expect the milk pattern to quickly disappear as it diffuses into the coffee, the surprising result in UQUAM is that the atomic patterns never disappear in this ‘quantum coffee’. The pattern instead stays there forever, frozen in place.

‘Nothing mixes, nothing moves,’ said Prof. Altman. ‘So you cannot even define the temperature.’

The next step is to explore quantum mechanical effects that persist in this localised state, and also use the slow-motion view to explore other aspects of quantum behaviour.

‘One interesting goal is to understand better quantum magnetism (where atoms behave as individual magnets) and high temperature superconductivity (where an electric current can pass through a material with no resistance),’ said Prof. Altman. ‘The prospects are very exciting.’

Scientists are also working to scale up research in ultra-cold systems by cooling atoms when they are joined-up together as molecules.

Since molecules can spin and vibrate, they are harder to control than atoms but they are better capable of interacting with each other in the ultra-cold realm.

‘In principle you can just have much, much larger interaction strengths,’ said Dr Silke Ospelkaus of Leibniz Universität Hannover, Germany, principal investigator of the ERC-funded POLAR project, which is developing techniques to control molecular processes such as chemical reactions on the quantum level.

Since the molecules move more, cooling them down takes more effort. The first approach, says Dr Ospelkaus, is for scientists to try to invent from scratch their own method to cool molecules - though none of the numerous attempts have yet reached temperatures cold enough.

‘The second approach,’ she said, ‘is to make use of the powerful cooling technique that we know for atoms to prepare ultra-cold atoms, and then to associate two ultra-cold atoms in a controlled chemical reaction into ultra-cold molecules.’

After constructing these ultra-cold molecules, researchers can then squash them into a narrow pancake-like laser grid where they can only have room to move side-to-side.

The molecules that Dr Ospelkaus is using also have an extra feature called dipoles, where the atoms that make up molecules are arranged so that one part of a molecule has a positive charge and another part has a negative charge.

The arrangement of the molecules in the laser grid means their charges repel each other, keeping the molecules separate and giving researchers a chance to study them. ‘They don’t get close enough to each other to undergo a chemical reaction,’ said Dr Ospelkaus.

Like UQUAM, the POLAR project will later prepare experiments to examine how the ultra-cold molecules interact in many-body systems, where particles can interact with each other.