Twisting design of fusion reactor is thanks to supercomputers 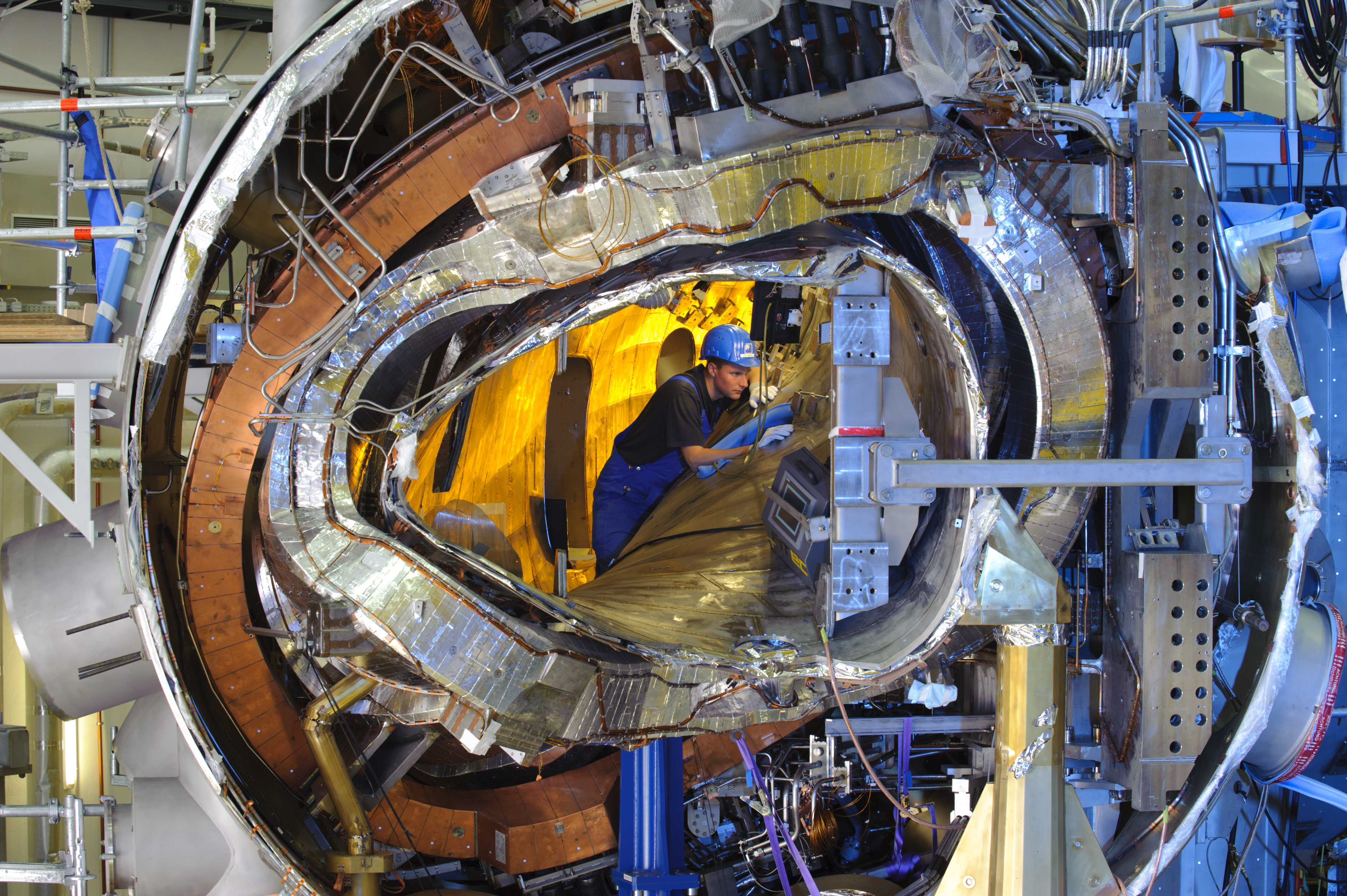 The design of the Wendelstein 7-X reactor allows for a magnetic field to hold the high-temperature ionised plasma in place, thus allowing for a stable fusion reaction. Image courtesy of the Max-Planck-Institute for Particle Physics

With hundreds of viewports of different lengths jutting from its outer wall, the Wendelstein 7-X looks otherworldly — more like science fiction than an experimental fusion reactor dreamt up by human beings. That’s because the humans had help.

The breakthrough design of the fusion reactor, located in Greifswald, Germany, was only possible using extremely powerful computers known as supercomputers.

‘It looks a little bit like an alien ship. But that's just the outcome of a very systemic physics and engineering process that is behind it,’ explained project leader Professor Thomas Klinger of the Max-Planck-Institute for Plasma Physics in Germany.

The strange-looking layout of the Wendelstein 7-X, created with the help of EU research funds, is a result of the unique needs of its stellarator design, so-named because it mimics the conditions taking place inside stars, where huge amounts of energy are released by fusing hydrogen into helium.

Nuclear fusion could provide cheap, clean energy if attempts to build a fully operational reactor are successful. However, it is only possible at incredibly high temperatures, around 100 million degrees Celsius, where electrons are stripped from hydrogen atoms to create ionised plasma. Such plasma must be kept hot enough for fusion to occur and material walls would cool it down, which is why scientists must trap the plasma using powerful magnets.

‘The magnetic field coils have to have just the shape to create the right magnetic field,’ Prof. Klinger said. ‘We have been doing a long research phase of 20 years in which it was found out what the actual field is we need, or the plasma needs, for being well-confined.’

Those requirements led to the Wendelstein device, where scientists, with the help of the supercomputers, created a uniquely shaped superconducting magnet system to hold the plasma. That is then surrounded by an outer vessel to keep the coils cool in a vacuum at -270 degrees Celsius with liquid helium.

Keeping the plasma confined is the number one challenge faced by scientists. In February, the project began testing the system with hydrogen plasma for the first time.

‘The first hydrogen plasma had a duration of 40 milliseconds, so pretty short. Since then, we have made a lot of progress, and we were able to create hydrogen plasma more recently for 8 seconds. So that’s an increase by a factor of 200,’ Prof. Klinger said.

By the summer of next year, the team hopes to be running the stellarator at full power for ten seconds, after installing more graphite elements for the wall. After that, they plan to introduce active water cooling, which they hope will enable them to run the device for 30 minutes.

The wild design of the stellarator is crucial to giving scientists the greatest flexibility to try out different magnetic fields to see how the plasma behaves and if the confinement is getting better.

Global warming will cause sea levels to rise 3.2 centimetres by the year 2025, and possibly 0.82 metres by the end of the century, according to projections compiled by the UN’s Intergovernmental Panel on Climate Change.

To prevent catastrophic sea level rises and stop the world warming by over 2 degrees Celsius compared with pre-industrial levels, EU and world leaders agreed during the COP21 conference in Paris to rein in greenhouse gas emissions.

If it can be made to work cost-effectively, nuclear fusion has the potential to dramatically reduce CO2 emissions in Europe, which were estimated at 4 611 million tonnes in 2013.

‘We have seven different current circuits, and we can control each current circuit to run the coil separately. That gives us, literally speaking, seven knobs to turn … with which we create different magnetic field configurations,’ Prof. Klinger said.

Trying to find the best confining and heat insulating field is one of the main scientific tasks of the experimental device, but the complex behaviour of the trapped plasma makes that difficult.

The trick of the Wendelstein’s stellarator design is that the external magnetic coils twist the entire magnetic field itself, like a corkscrew, to counteract against unwanted drift motions.

In the south of France, researchers at the ITER project are testing an alternative, doughnut-shaped fusion reactor design, known as a tokamak.

While tokamaks operate in pulses, where a strong electric current in the plasma is ramped up and down, the idea behind the stellarator is that the magnetic field is twisted by the external magnetic field coils which means the plasma can be held in a steady state.

‘What we are aiming for is to maintain the plasma for 30 minutes, so 1 800 seconds,’ Prof. Klinger said. ‘In a stellarator, you can create the plasma and basically it stands there without interruption for hours, days, months ... or years.’

What has held stellarators back until recently is getting the plasma right.

Much like the violent surface of the sun, waves in the plasma create a constant mixture of uneven forces. The plasma, sitting in the magnetic field, is not flowing calmly, but rather sloshing about, reacting to magnetic fields but also generating its own.

‘We call that the “fluid picture” of a plasma,’ Prof. Klinger said. ‘It's always just a picture. We scientists only make a picture of reality, and that is a useful picture how to describe what is happening.’

Seen from another perspective, plasma behaves more like a gas, trying to expand and escape from its container. And turbulence has caused a number of headaches.

‘Without turbulence, fusion devices would be much smaller than what we have now, because in order to counteract the heat loss, you have to make the machine big,’ Prof. Klinger explained.

‘What we are aiming for is to maintain the plasma for 30 minutes.’

The larger the volume of the reactor, the more energy which can be created. That bigger amount offsets energy that escapes confinement through the surface.

‘If you can find ways to reduce the turbulence … you make the heat insulation properties of the plasma better, and you can basically build smaller machines,’ Prof. Klinger said.

While large 1 gigawatt fusion plants could be the backbone of an electrical network, smaller machines could make easier-to-build power stations for industrial plants situated right inside cities.

That’s because unlike nuclear fission plants, there is no chain reaction that needs to be carefully controlled.

‘If anything goes wrong, if somebody pushes the wrong button or an aeroplane flies into the power station, then the plasma just stops existing. Very quickly, within a tenth of a second, it recombines at the wall,’ Prof. Klinger said.

‘The plasma is so thin, there's so little mass, at a power station we are talking a maximum of 1 gram of plasma. Compare that to the 30 000 ton weight of the machine, and then guess who wins.’