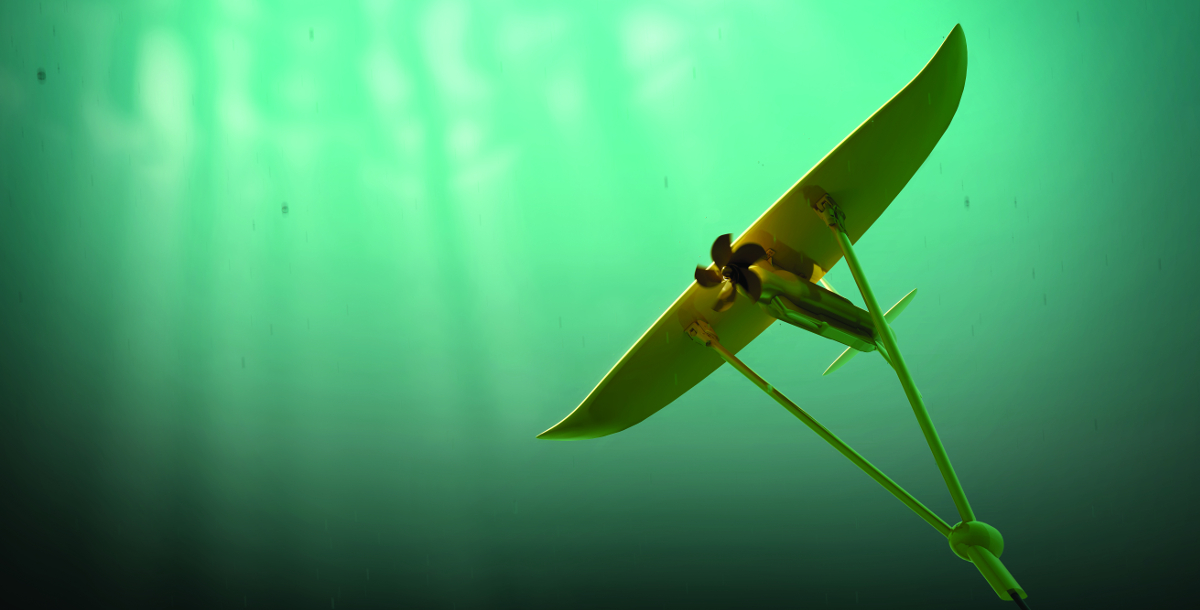 An underwater kite could harness tidal energy to use on land. Image courtesy of Minesto

Billions of tonnes of water are swept up and down Europe’s estuaries and coastlines each and every day. Engineers have been working hard to develop the technologies to tap into this vast store of tidal energy and are now predicting a ramp-up in production from 2020 onwards.

Swedish company Minesto is working on an underwater kite that generates electricity from tidal and ocean currents. ‘Ocean energy is reliable, predictable energy, it has a lot of advantages,’ said Per Salomonsson, an engineer at the company, who is helping design the technology.

The EU's renewable energy directive sets a binding target that 20 % of energy must come from renewable sources by 2020 and at least 27 % by 2030.

All EU countries have adopted national renewable energy action plans showing how they intend to meet their targets.

Given the enormous potential, the European Commission has supported ocean energy research since the 1980s with more than EUR 55 million in funding.

The kite operates at least 20 metres under the ocean surface where a cable steers it through the current in order to maximise the power generated by a turbine on its underside. The idea is to construct arrays of up to hundreds of individual kites.

The concept, known as Deep Green, was first invented by an engineer at the Swedish aerospace company Saab before developing into a stand-alone company - Minesto - 10 years ago.

‘Deep Green is the only known technology that exploits low-velocity tidal streams,’ added Salomonsson, explaining that this means it can be used much more widely than other tidal energy devices.

The kite is one of several tidal energy technologies that engineers believe will become commercially viable in the next few years.

There is also a floating platform that is being trialled at the world’s first marine energy test facility, the European Marine Energy Centre (EMEC), which was set up on the Scottish island of Orkney in 2003.

James Murray, business development manager at Scotrenewables Tidal Power in the UK, which is developing the technology, said: ‘Earlier generations of tidal energy technologies looked at fixing turbines to the sea bed. We recognised that the key enabling technology for tidal energy isn’t the turbines themselves, but the platform.’

The firm has developed the world’s most powerful floating tidal platform called the SR2000. Two 1-megawatt turbines are mounted to its underside and can be tucked away when the platform is towed to and from site. The device is designed for low-cost, on-site access, with all installation and maintenance operations carried out by small workboats or crew transfer vessels.

Last month, the company announced that it had successfully installed the SR2000 for the first time at EMEC in an operation taking less than 30 minutes.

Despite these advancements, ocean energy technology is still expensive with big costs going into the design, construction, deployment and maintenance of devices.

Speaking at an ocean energy conference on 8 November in Brussels, Belgium, Karmenu Vella, the European Commissioner for the Environment, Maritime Affairs and Fisheries, said: ‘Experience from offshore wind shows that developing mature and efficient technologies takes time. But once they reach that crucial tipping point, they can take off with astonishing speed.’

In 2014, the European Commission asked the ocean energy industry to come up with a plan for commercialising the sector in Europe, and this was presented to the Commissioner at the conference. One key suggestion was to bridge the gap between risk-averse commercial lenders and public authorities through milestone grants, guarantees and insurance.

Commissioner Vella said financial resources are needed to get the industry off to a ‘flying start’, and that the European Commission would soon be launching a market investment platform for ocean energy.

Scotrenewables’ Murray said: ‘The most important factor to encourage continued private investment is consistency of support at national and EU levels because there is still work to be done to get costs down to compete with other technologies but there is a tremendous potential for low-carbon generation and job creation if we can do so.’

The company has come together with eight other industry partners under an EU-funded project called FloTEC to develop the more efficient SR2000 Mark 2 floating platform.

‘I don’t see any reason why the industry can’t deliver significant deployment of tidal energy post-2020.’

‘We are focusing on four areas of innovation to drive down the cost of the technology by 25 % and progress the technology to commercialisation,’ said Murray, who acts as the project coordinator of FloTEC.

The SR2000 Mark 2 will be launched in 2018 and following a period of testing Scotrenewables hopes that the platform will provide a low-cost, low-risk solution for large tidal array deployments.

It’s a similar story for the EU-funded PowerKite project, coordinated by Salomonsson, which is aiming to advance the design of Minesto’s Deep Green kite. Its objective is to make the technology even more competitive for future scale-up.

‘We are looking at reducing costs and maintenance while improving energy performance,’ he said.

Before ocean energy makes a notable contribution to the energy mix, national governments and the EU still have to help establish the market. But, according to Murray, with recent innovations that will be sooner rather than later.

‘If we can show progress through this project, and other pilot projects, I don’t see any reason why the industry can’t deliver significant deployment of tidal energy post-2020,’ said Murray.