Is there life on super-Earths? The answer could lie in their cores 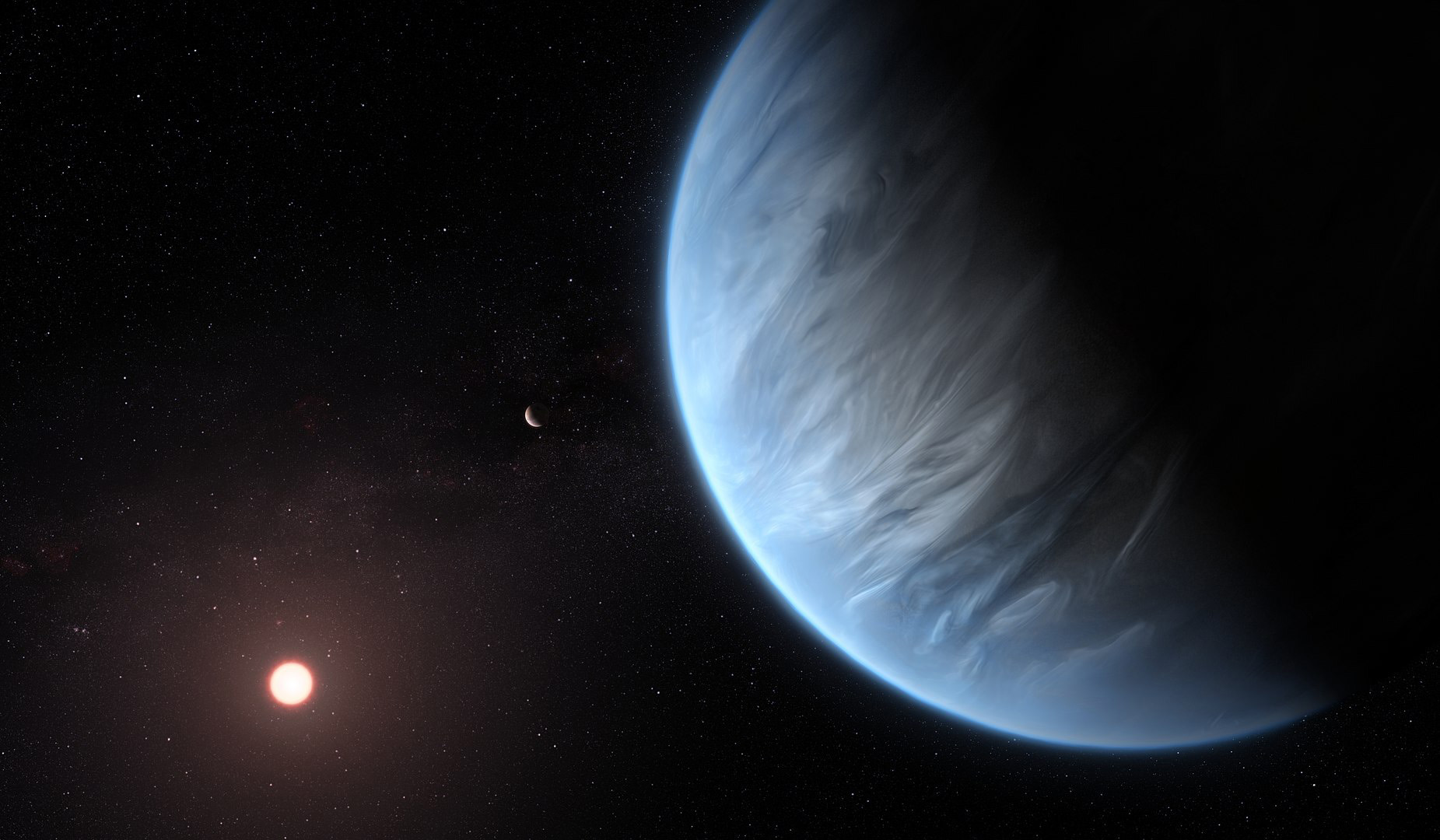 The habitability of a super-Earth could be related to its having a magnetic field. Image credit - ESA/Hubble, M. Kornmesser, licensed under CC BY 4.0. Artist’s impression of super-Earth K2-18 b

Rocky planets larger than our own, so-called super-Earths, are surprisingly abundant in our Galaxy, and stand as the most likely planets to be habitable. Getting a better idea of their interior structures will help predict whether different planets are able to generate magnetic fields – thought to be conducive for life to survive.

Atmospheric water has been discovered by European scientists on a planet 124 light-years away from us. It is possible that clouds form and even rain falls on this faraway world, dubbed K2-18 b. The planet lies within what astronomers call the habitable zone, with a temperature that could allow life to thrive there.

The rocky planet is eight times the mass of Earth and known as a super-Earth. This is the name given to planets between the size of Earth and Neptune. ‘Super-Earths are actually the most common type of planet in our galaxy,’ said Dr Ingo Waldmann, extrasolar planet explorer at University College London, UK, one of the scientists who reported on the existence of the watery world K2-18 b. Super-Earths are also possible residences of alien life.

The first planet orbiting an active star beyond our own solar system was discovered in 1995. Since then, the Kepler space telescope has increased the rate of discovery, with 4,000 such exoplanets now known. Initially, large gaseous giants near their stars, ‘hot Jupiters,’ seemed most common, but as more and more super-Earths piled up, scientists became puzzled by their abundance.

‘The early exoplanet systems found were the simple ones, with one hot Jupiter going around a star. We weren’t really expecting anything like super-Earths, but then they started to show up,’ said Dr Waldmann. ‘We know as good as nothing about super-Earths at the moment, because they don’t exist in our own solar system.’ 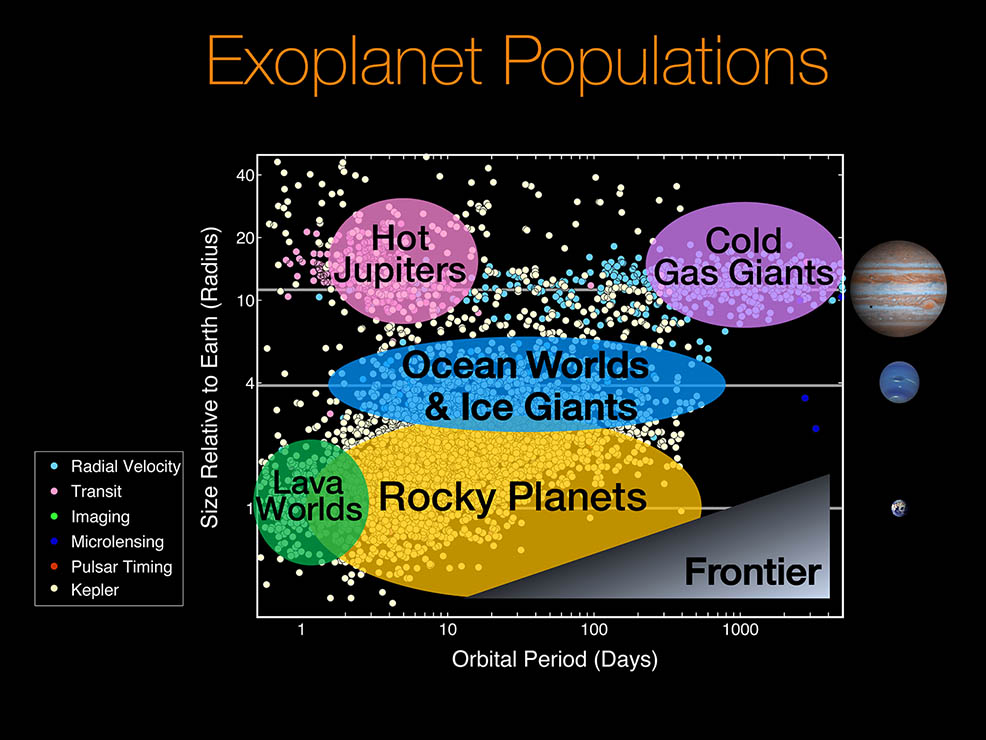 Most of these mysterious planets are discovered when they transit in front of small stars and cause the starlight to dim. From this, researchers can work out the mass and the radius of the planet and the evidence suggests that these worlds are incredibly diverse in their make-up.

‘Super-Earths can be all sorts of things really,’ said Dr Waldmann. He gives the example of 55 Cancri e, a planet with a lava ocean at temperatures hot enough to melt iron, and Gliese 1214 b, which is a potential ocean planet consisting mostly of water. Scientists deduce which molecules are in a planet’s atmosphere by studying starlight as it passes through.

Knowing what goes on inside these distant planets is far more difficult. ‘We can look at the surface of the star to get hints about the chemistry and composition of a planet, which gives us hints as to how much iron or silicon may be in a planet,’ said Dr Razvan Caracas, planetary mineralogist at École Normale Supérieure de Lyon in France.

This is important because depending on whether there is a solid core, perhaps made from nickel or nickel and iron, and a liquid metal outer core, a planet might or might not have a magnetic field. Earth’s magnetic field keeps most of the sun’s radiation away from us by deflecting a stream of charged particles so they don't reach our planet’s surface. Researchers believe this sort of shielding would be necessary for life to emerge elsewhere.

Dr Caracas supervised a project called ABISSE which ran computer simulations of various iron-nickel mixtures at extremely high pressures to see how they behaved. These are the metals that likely sit at the core of super-Earths, but it is unclear whether iron and nickel would mix together, separate into different layers or become liquid at the intense pressures inside large planets.

By understanding the type of core structure that could arise from proportions of nickel and iron, scientists hope to understand what could be happening inside super-Earths based on what we find out about their chemical composition.

‘Two cores might behave differently, and one might have a magnetic field and the other wouldn’t,’ explained Dr Caracas. ‘A stronger magnetic field gives you better protection on the surface from the sun’s rays, and that means you can make organic molecules that are more complex.’

Dr Guillaume Fiquet, an experimental physicist at CNRS and Sorbonne University in Paris, France, is also trying to understand super-Earth interiors through a project called PLANETDIVE. ‘When people talk about the habitability of planets, this is often related to the presence of a magnetic field, which itself is related to having some kind of metallic core or at least conductive material (in vigorous motion),’ he said.

He is investigating how materials like iron behave under pressures inside super-Earths, which could be up to 1 terapascal, three times the pressure within Earth. This squashes atoms together and can change the properties of materials, meaning that our knowledge about how they behave on Earth may not apply to exoplanets.

‘Exoplanets can be larger planets than Earth, which means the pressures and temperatures could be much greater,’ Dr Fiquet said, ‘That forces us to try to develop new tools to access special states of matter that we don’t know yet.’

Dr Fiquet sheds light on this mystery by recreating the high temperatures and extreme pressures that may lie at the heart of these exotic planets. He does this on vanishingly small scales, firing powerful lasers at tiny specs of metal or squeezing them between microscopic diamond anvils.

This experimental setup has helped him draw melting curves for elements like iron that probably sit at the core of super-Earths under intense pressure. These can then be used to refine the material properties that scientists use to infer what goes on in the interiors of super-Earths and ultimately know more about their bulk chemical composition, says Dr Fiquet.

Meanwhile, Dr Waldmann leads research to assist astronomers in dealing with super-Earth data from future exoplanet discoveries using artificial intelligence (AI). We need AI, said Dr Waldmann, ‘because all this data is extremely difficult to analyse and we will be stretched to the limit of what is possible to do by hand.’

Super-Earths are prime candidates for the existence of extraterrestrial life. His AI, developed through the ExoAI project, will help astronomers interpret observations of chemicals in an exoplanet’s atmosphere, for example, and tell them whether a super-Earth is interesting for further study or not.

‘That is the holy grail,’ Dr Waldmann added. ‘Finding chemical signatures in the atmosphere of a super-Earth due to life. Hopefully we will in the next couple of years, or decades.’