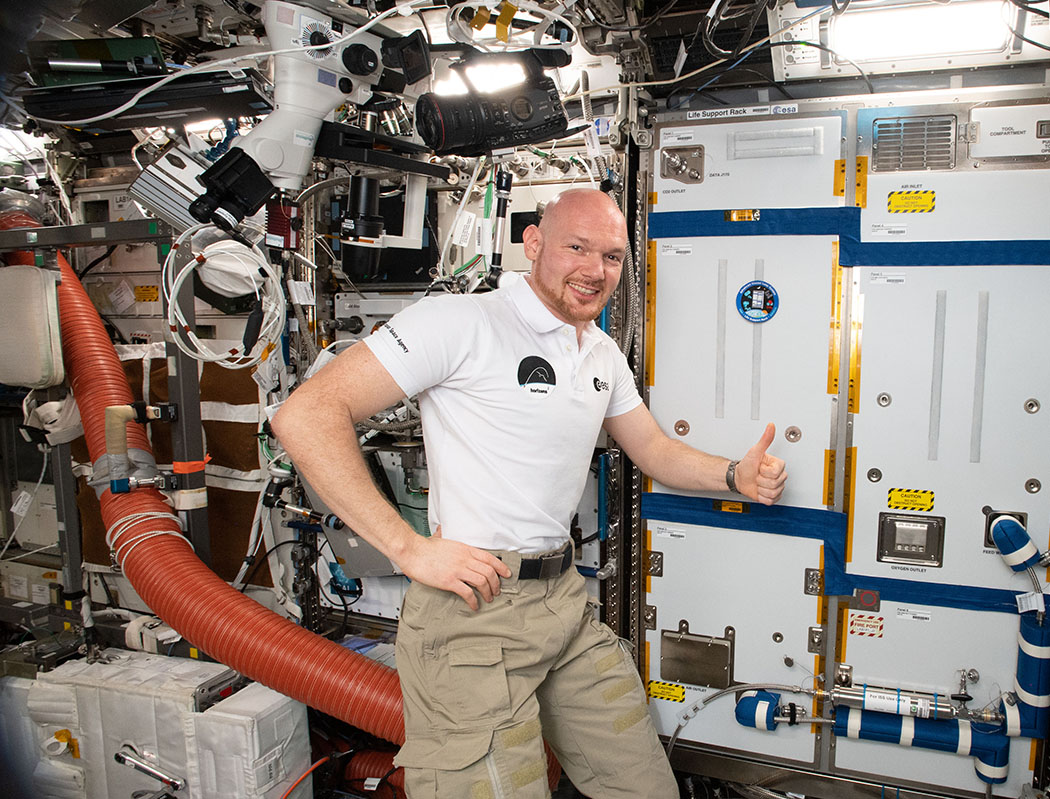 When astronauts aboard the International Space Station (ISS) exhale carbon dioxide (CO2), it’s removed from the air and pumped into space. Could an Earth-based version help remove greenhouse gas emissions from our atmosphere?

In order to limit global warming to 1.5˚C above pre-industrial levels and avoid some of the worse impacts of climate change, it means eliminating all 42 billion tonnes of annual CO2 emissions by 2050.

One way of doing this is to cut emissions. Another is to design materials that can remove the CO2 that is already in the atmosphere or before it’s expelled. The problem is that no one has quite worked out how best to do this – yet.

The air filter system in space inspired Professor Stefano Brandani and Dr Giulio Santori from the University of Edinburgh, UK, to develop a way of capturing and concentrating CO2 directly from the atmosphere. This ambitious strategy – to build a so-called artificial tree – would see CO2 captured to be stored in large underground reservoirs.

'If you could capture CO2 from the air, this will allow you compress it and to store it in a nearby geological facility.'

The CO2 breathed by astronauts aboard the ISS is captured by using a sponge-like mineral called a zeolite, which has tiny pores to lock in a CO2 molecule. On the space station, the zeolites empty their CO2 when exposed to the vacuum of space.

As part of a project called ACCA, Dr Santori is hacking the system so it will work on Earth. This is more challenging. ‘There is so much more CO2 to capture and concentrations are more dilute to begin with on Earth, so it is much more energy intensive,’ he explained. ‘The starting concentration of CO2 on the ISS is one order of magnitude higher.’

The new system works by having a series of zeolite adsorption beds. Each takes in CO2, concentrates it a little and releases it when heated up. ‘It is like a sponge. You regenerate the material using heat. When it is cold, it takes in a lot (of CO2),’ said Dr Santori.

This CO2 then moves into a new adsorption bed, which again pushes the gas molecules closer. The gas is thereby compressed more at each step, without the need for moving parts like vacuum pumps. Temperature changes are the engine of this process. Heating and cooling the spongy material causes it to release the gas, and take up more.

With five beds of zeolites, emptied with heat – which could be waste heat from an industrial facility – and cooled at ambient temperature, CO2 could be captured at a purity of above 95%, with little energy consumed.

‘If you could capture CO2 from the air, this will allow you compress it and to store it in a nearby geological facility,’ said Dr Santori, who believes that large-scale carbon capture and storage is the ideal strategy for decreasing CO2 in the atmosphere.

In the long term, zeolites could be used in stations that could capture CO2 directly from the air – but this is a long way off as compressing CO2 is just part of the problem. Because CO2 is very dilute in ambient air, technology such as giant fans would be needed to suck it towards the stations without spending too much energy or money – something that is still too high a hurdle for current technologies. Prof. Brandani said: ‘The issue is how much it costs and who then owns the CO2.’

A nearer-term option is to focus on stripping CO2 from the waste gases produced by industry before it is released into the atmosphere.

CO2 spews from fossil-fuelled power plants, but industries such as steel and cement emit lots of CO2 as well. The chemical reactions needed to turn limestone into cement, for example, set free CO2 gas and cement-making alone releases 7% of all global carbon emissions.

The idea is to install membranes that trap CO2, which can then be concentrated and compressed for storage. ‘Membranes are efficient and can save energy compared to other systems,’ said Professor Marco Giacinti Baschetti at the University of Bologna, Italy.

In traditional strategies used by industries such as coal plants, CO2 is captured in special liquids or solid sponge-like structures, but these must then be heated up to release the CO2. This is not needed with membranes. All existing technologies, however, are costly. Current membrane materials are not durable enough and do not separate CO2 well enough to be economically sensible.

Prof. Baschetti runs a project called NANOMEMC2 which is developing a number of different membranes for CO2 capture. In November, the team is to test a new membrane in a Colacem cement facility in Italy.

Developed by project scientists at the Norwegian University of Science and Technology, the membrane is made of hollow fibres, about a millimetre thick, and covered with an extremely thin layer of nanocellulose and polymer mixed with artificial amino acids. The nanocelluose, which is made of miniscule fibres from wood, allows CO2 to permeate, while blocking other gases. The amino acid grabs onto CO2 and pulls it across the membrane.

‘Cement plants generate CO2 from combustion and from making cement, so their flue gas is high in CO2,’ said Prof. Baschetti. ‘We will feed this gas through our membrane to separate out CO2, but of course when you do this in industry, some dust and impurities will be present. We want to see if our membrane can still work properly with this real flue gas.’ The membrane will also be tested at the University of Sheffield, UK.

This project has not placed all its betting chips on one membrane. ‘We started in the lab and screened more than 60 types of membranes,’ said Dr Maria-Chiara Ferrari, a scientist on the project at the University of Edinburgh, UK.  There are around four membrane candidates leading the way that are based on facilitated transport – this is when a carrier molecule helps hook onto CO2 and ferry it across the membrane.

While it sounds promising, the technology is still at a very early – and small – stage. The membranes made so far in the lab fit in the palm of a hand, whereas the test membranes will be around the size of an A4 page. ‘A full real plant will need hundreds of thousands of square metres and the complete separation unit will occupy around three shipping containers in volume,’ Dr Ferrari explained.