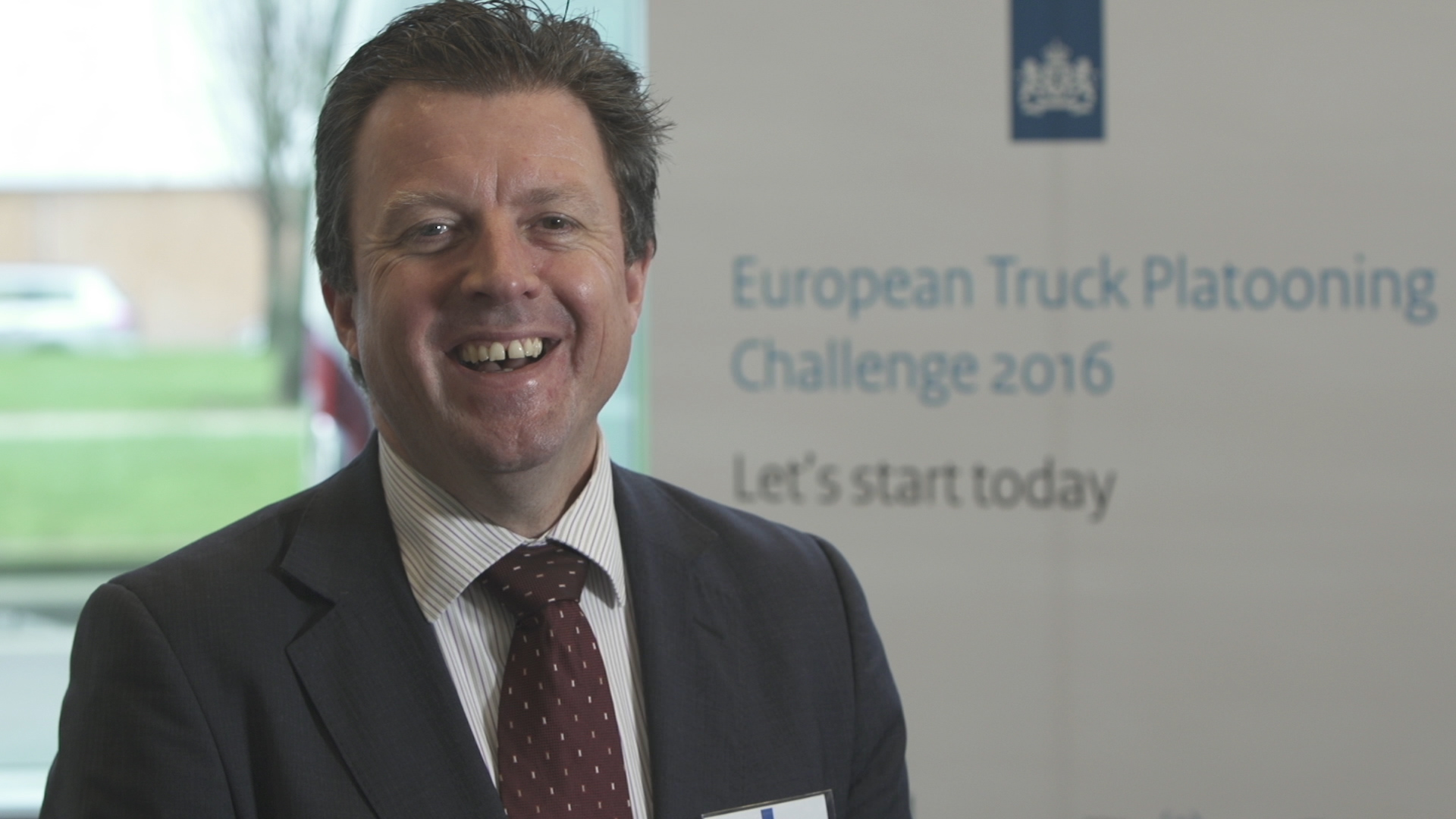 Steve Phillips is the secretary general of the Conference of European Directors of Roads (CEDR), which helped organise a truck platoon challenge that ended in Rotterdam on 6 April. Photo courtesy of Steve Phillips

The successful arrival in Rotterdam of six convoys of connected smart trucks from different points across Europe shows that cross-border truck platooning is feasible and operational challenges can be overcome, according to Steve Phillips, Secretary General of the Conference of European Directors of Roads (CEDR), which helped to organise the challenge.

In the European Truck Platooning Challenge, convoys of smart trucks drove to Rotterdam in the Netherlands from starting points including Sweden and southern Germany. What was significant about this?

‘It was the first time that we’ve managed to engage in transnational, cross-border running of truck platoons from different parts of Europe, with different manufacturers all demonstrating their technologies to show that it’s practical, it’s feasible, and that we can actually run these truck platoons along European highways.

‘We weren’t looking to test the technology aspect. We wouldn’t have been running this challenge if we weren’t sure the technology was safe and ready to use. This was just proof that we can overcome the institutional and operational challenges of running in different countries.’

The transport sector plays an important role in creating jobs and growth in Europe. It accounts for 6.3 % of the EU's GDP, employs 13 million people and is responsible for EUR 47 billion investment in research and development each year.

One current challenge for the EU is how to use technology to reduce the environmental impact of transport and help meet the emission reduction targets agreed at the COP21 climate conference in Paris.

The EU is also working to increase safety with a target of halving the number road deaths by 2020 compared to 2010 levels, and having close to zero fatalities by 2050.

With platooning, several trucks connect their systems to drive together in convoy with the lead truck determining speed and route. How does this fit in with automated transport?

‘In the case of platooning, what we’re really talking about is the highest levels of driver support. It is like an advanced adaptive cruise control, much like you would see on many vehicles at the moment. But instead of having radar or a sensor at the front of the car, as you would now, it’s actually communicating with the truck in front. The truck in front is saying, “Look, here I am, this is the speed I’m going and I know that you’re so far behind me,” and they’re talking to each other.

Why should we be excited about truck platooning?

‘The advantages of truck platooning are fairly numerous. The first one is the potential for the reduction of CO2. Running trucks close together, they get the aerodynamic effect and therefore they save fuel that way, much like birds do when they flock together.

‘The second advantage in terms of CO2 is because the trucks are all communicating with each other and getting advanced information, then they drive more smoothly, they can optimise their engine management and they can save fuel as they run.

‘There will be safety benefits because the drivers on their long-distance journeys will be supported by lots of automation in the cab. We’ll see advantages in terms of reduction of congestion, in terms of again the vehicles driving more smoothly and interacting with each other.

‘We’re also looking at whether we can provide some advantages in terms of reducing the impact of heavy goods vehicles on our infrastructure. Heavy goods vehicles cause damage to the road, they create rutting, they can damage bridges through repetition of lots of heavy loads going across them. By looking at building the automation into the trucks, we’re looking at whether we can actually reduce some of these effects.

‘So if it works, and there’s no reason to say it won’t work, it could be a win-win-win for all sections of society.’

Trucks that drive close together in platoons could reduce emissions by 20 %, according to researchers. Video courtesy of Scania

How long will it be before truck platooning is an everyday reality?

‘I’m fairly sure we will see this fairly routinely in the next few years in certain countries on certain designated routes. In terms of cross-border regular operations, I think we’re probably a number of years away, unless it’s on a regional basis. There’s clearly some concerns from some countries about how cars in particular will enter and leave motorway junctions when these platoons are going through. The process of doing that needs to be fully worked through.

‘When it comes to actually regulating the roads themselves, there are slight differences between each country. That’s not a challenge as such, that’s just something that needs to be worked through. It should be possible for countries to cooperate where there’s willingness to do this quite quickly.’

‘If it works, and there’s no reason to say it won’t work, it could be a win-win-win for all sections of society.’

Steve Phillips, Secretary General of the Conference of European Directors of Roads (CEDR)

One of the next events in your diary is the Transport Research Arena (TRA) conference in Warsaw, Poland, on 18-21 April. Why is this important?

‘If we’re going to get the very best out of roads, we need to encompass innovations such as automation, new materials, and different methods of procurement and financing. The key benefit of TRA is that it brings together all the different stakeholders who are relevant to developing new innovations, to researching innovations or implementing new innovations, whether from the automotive sector, waterways and railways, academia, materials, or construction.’

What do you expect to come out of the conference?

‘We’ll be taking forward issues on truck platooning and on a wide range of ITS (intelligent transport system) technologies. We’re looking forward, for example, to giving guidance out on things as wide ranging as water quality (how to prevent chemical water pollution as a result of building roads), right through to procurement. There’s a number of different very concrete actions that the road authorities will be taking away from TRA and hopefully implementing fairly quickly.’

On the table for discussion this year is the role of transport in creating a connected Europe, automation in transport, decarbonisation and mobility of tomorrow.

The conference takes place every two years and is co-organised by the European Commission and relevant European Technology Platforms, which are industry-led bodies that work to promote innovation in sectors such as automotive, rail, shipping and logistics.

The sixth TRA conference will be held from 18-21 April 2016 in Warsaw, Poland, and more than 2 000 participants are expected. More information can be found at http://www.traconference.eu/