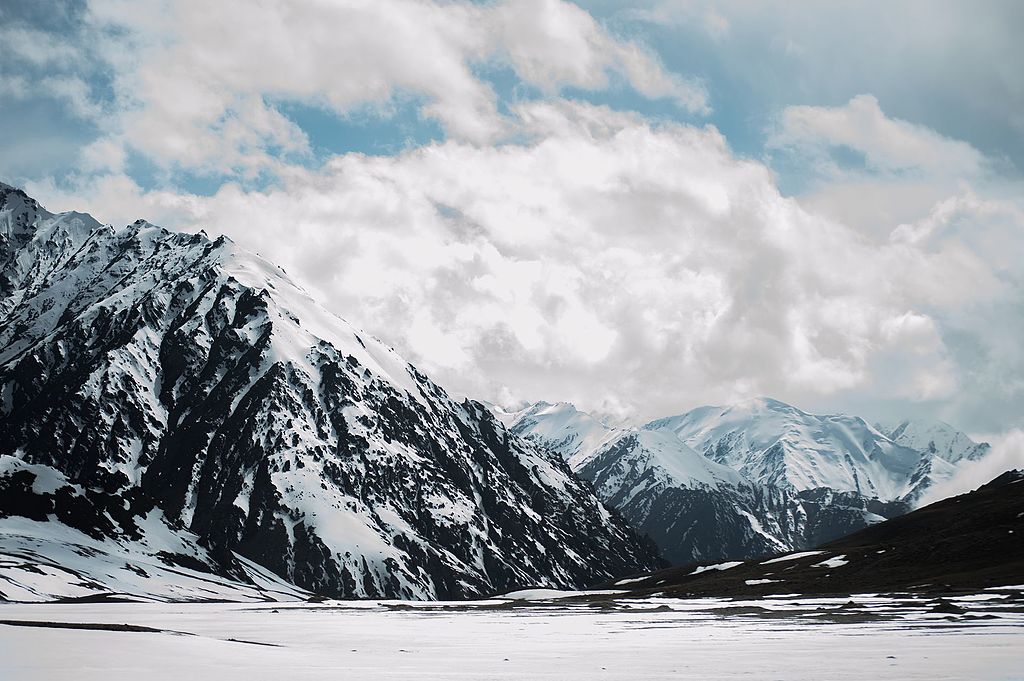 The region of High Mountain Asia, which includes the Karakoram mountain range, is known as the third pole of the Earth because of the scale of its ice fields. Image credit - Tahakhan021, licensed under CC BY-SA 4.0

Scientists may have solved a 25-year-old puzzle about the mysterious behaviour of certain glaciers in High Mountain Asia. In most of this region, they are shrinking; but in the northwest, they are growing.

High Mountain Asia includes ranges that span the borders of Afghanistan, Bhutan, Nepal, India, China and Pakistan. The rate of glacier melting has doubled here in the last 20 years – except for glaciers in the Karakoram and Kunlun ranges where, since the 1990s, they have been stable or have even been growing.

Some scientists have attributed the oddity to a cold vortex of wind that sits over these glaciers, but Professor Walter Immerzeel, a mountain hydrologist at Utrecht University in the Netherlands, wondered if it might have to do with farming in the plains below. It was once desert, but farmers have transformed this region, known as the Tarim Basin, into green farmland by tapping into groundwater for irrigation.

As part of a project called CAT, Prof. Immerzeel’s team built a model of the local climate which has demonstrated that this ground water, absorbed by crops, then evaporates from their leaves to create moisture-laden air which, as it rises, blocks some of the sun’s radiation and then falls as snow onto the glaciers.

While the topic is still one of hot debate, Prof. Immerzeel’s work illustrates the growing understanding about how High Mountain Asia works hydrologically, and how it is responding to climate change. 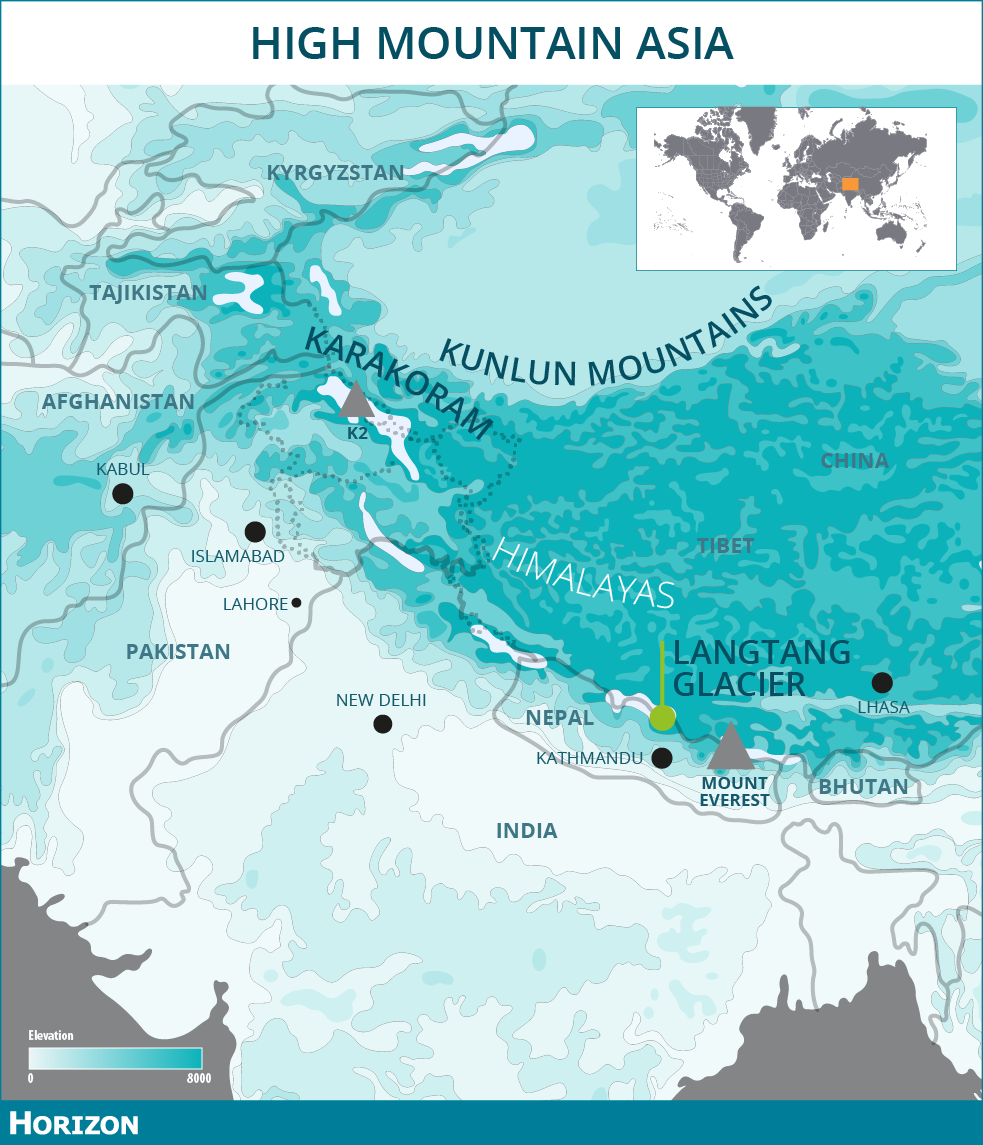 It’s a vastly important region to understand, says Professor Francesca Pellicciotti, a glaciologist at the Swiss Federal Institute for Forest, Snow and Landscape Research. It sustains the third biggest mass of ice in the world, after the North and South Poles. Unlike them, however, it is surrounded by dense population, its meltwaters serving, at least in part, the freshwater needs of 800 million people. Glaciers buffer the water, storing it as ice during seasons of high precipitation, and releasing it downstream in the dry season.

There has been an explosion of research in the last decade because of scientists’ great ignorance of the region, says Prof. Immerzeel.

As a result, another mystery may have been solved.

Around a third of glaciers in the region are blanketed in rocks and stones up to a metre and half thick, says Prof. Immerzeel. This debris shields the ice below from the fierce sun, delaying melting and thus further buffering the system. It was thought that these glaciers would also be better protected against global warming.

It was a shock, therefore, in 2012, when a team found from satellite data that these debris-covered glaciers were thinning at the same rate as clean glaciers.

‘This was a very controversial paper,’ said Prof. Pellicciotti.

Since the claim was based on fairly coarse satellite imagery it was essential to investigate on the ground. This is rough work in inaccessible places at high altitudes, clambering over scattered rock. ‘It’s almost impossible to walk on them and if you want to reach the ice you first have to dig through half a metre of debris,’ said Prof. Immerzeel. ‘The traditional techniques used in the Alps don’t work here.’

The maps and ground investigations have revealed something satellites couldn’t: the debris is pock-marked with ponds, and cliffs of ice, that can transfer the sun’s radiation deep inside.

‘Fundamentally they (can) melt up to 30 times more than other areas (of the glacier). We call them hotspots for melting,’ said Prof. Pellicciotti.

How the ponds form, and how significant they are at scale, is still unknown, and scientists need to know whether they exist across the vast swathe of High Mountain Asia, and not just in Langtang. So, in a project called RAVEN, Prof. Pellicciotti is now looking for ponds and ice cliffs at three further sites thousands of kilometres apart.

Models may have to change but Prof. Pellicciotti believes that, overall, debris does prolong the glacier melt. But separate work she has done in the Andes, along the western edge of South America, has revealed that, as temperatures rise, such glaciers can reach a tipping point where the debris insulation fails and glaciers suddenly melt.

‘Then they will just go,’ she said, as they are located at lower elevations than clean ice glaciers.

A headache for High Mountain Asia hydrologists has been their inability to account for all its water. Quantities of snow have unaccountably been disappearing from the system, says Prof. Immerzeel.

His team installed an advanced instrument on a high mountain glacier, capable of making rapid, repeated recordings of moisture levels and wind speed.

They discovered that there is a perfect set of extreme conditions – high dryness, intense solar radiation and hurricane-strength wind – that encourages ice to bypass the normal process of turning to water. Instead it transforms directly into vapour, a process known as sublimation. And that’s where the missing water was going.

Further data from the team’s weather stations has led to the discovery that there is far more precipitation in the high mountains than has previously been estimated.

‘Instead of a glacier there will be a rocky area and if rain falls on a rocky area it is almost immediately in a river so … it will become a much faster and more extreme system. That is really the challenge for the future.’

As the teams digest these discoveries, they are developing a clearer picture of the effects downstream.

The future, believes Prof. Immerzeel, will be a turbulent one. As glaciers recede, the amount of water available will rise until it reaches ‘peak water’ later this century. After this, some fear that the region will dry. But Prof. Immerzeel thinks that the high precipitation levels in the mountains mean that there will always be water.

‘Despite what has been said – that all the rivers in Asia will run dry due to climate change – I don’t think that will be the case – there will be even more water available.

‘That doesn’t mean there’s no problem, because the biggest challenge is dealing with the extremes. Instead of a glacier there will be a rocky area and if rain falls on a rocky area it is almost immediately a river so … it will become a much faster and more extreme system. That is really the challenge for the future.’

Prof Pellicciotti says the biggest problem is the lack of ability to coordinate a response.

‘This is really an explosive situation. A loss of ice and lots of people in the context of poor governance, poverty and already-existing conflicts, migration and contested territory,’ she said, citing for example the dispute between India and Pakistan over the Kashmir region and territorial disputes between Nepal, China and India.

‘It’s really a very, very difficult situation and glaciers are the buffers.’