Studying ant cooperation is revealing how brains work together 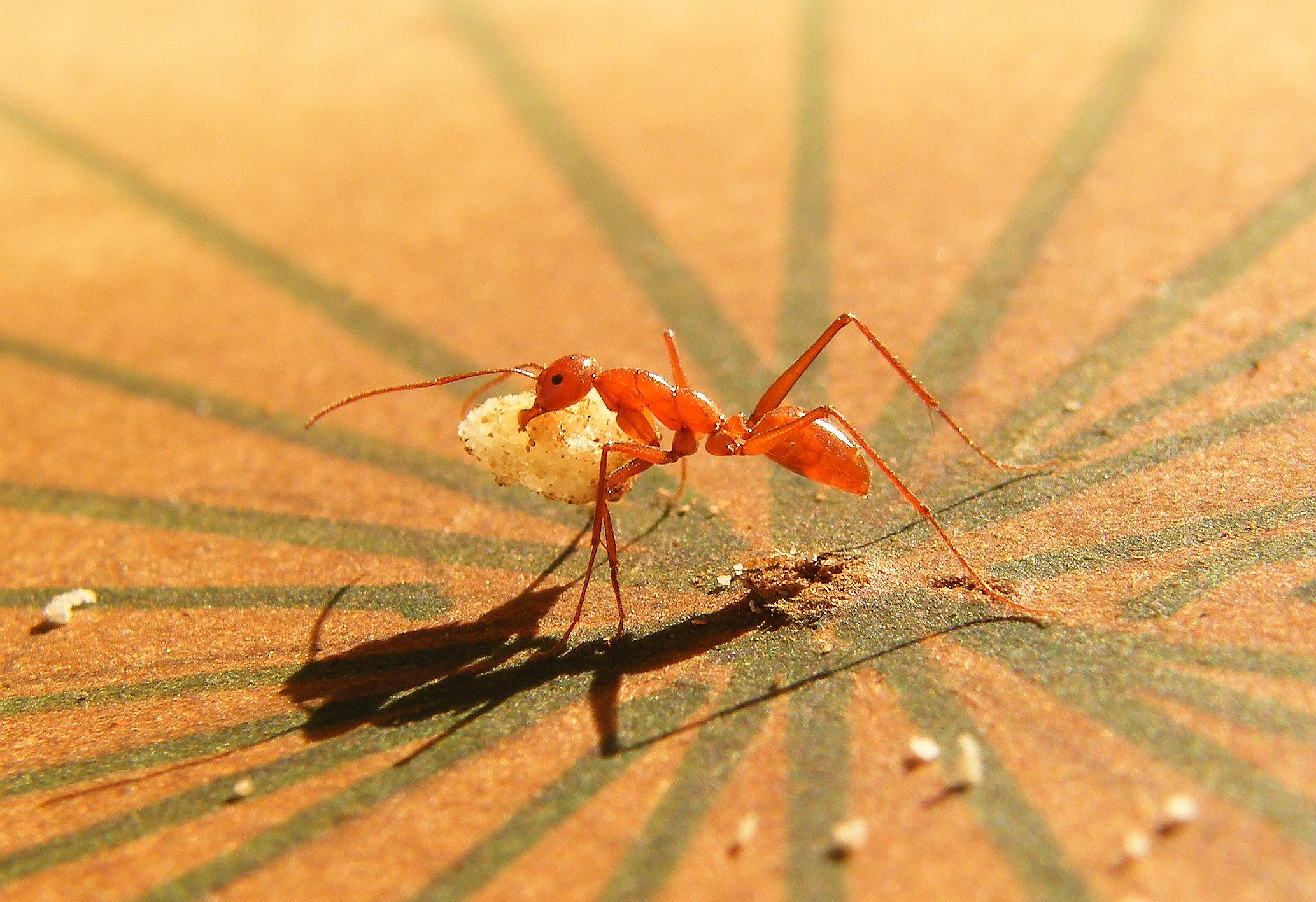 An ant has the navigation skills to cover hundreds of metres in a single day and still find its way home. Melophorus Bagoti ant. Image Credit - Antoine Wystrach

As a child, you almost certainly at one stage spent hours watching ants move about from their nest. Maybe you dropped a piece of food and watched as a group of ants came and picked it up, carrying it home in an impressive display of cooperation.

What you probably didn’t realise, however, is just how important this ability is to our understanding of not only insect brains, but our own brains as well. How ants work together and navigate their environment has important implications for group cognition and even autonomous technologies like self-driving cars, and our knowledge of this ability is growing faster than ever.

Many groups of scientists around the world are now working on insect cognition, striving to understand exactly what it is inside their tiny brains that makes them such adept collaborators. And just like inquisitive children, they are watching as these ants leave and return to their nest with impressive dexterity.

Dr Ofer Feinerman from the Weizmann Institute of Science in Rehovot, Israel is leading a project called ANTSolve to study how ants work together to return food to their nests. Together with his team, he is investigating this type of collaborative behaviour to get a better understanding of collective cognition.

‘When you group things together, ants or cells, biological entities or birds, what can you get more cognitively than the individual?’ he said. ‘This is the driving question…Can it be that you take many individuals and get something that’s in a way smarter than a single individual?’

To find out, Dr Feinerman and his team have been busy performing thousands of experiments on ant nests on their campus. Specifically they have been observing longhorn crazy ants, which despite the name are naturally fearful of other ants and thus tend to work together as much as possible. Setting up cameras and placing food near nests, the team have been watching as a sole ant first finds the food, then alerts her friends to come and help.

‘Slowly ants will accumulate around this large food item,’ he said. ‘When there’s enough of them, they’ll start moving together. It’s a cooperative effort. All of them together have enough muscle strength to move it.’

To get a better understanding of this process, the team have also been placing mazes made of sheets of plastic near the nest, which the ants must traverse to find the food and then return home. This is intended to simulate leaves and rocks or other objects that have obscured their path, to see what is the most difficult maze they can solve together. 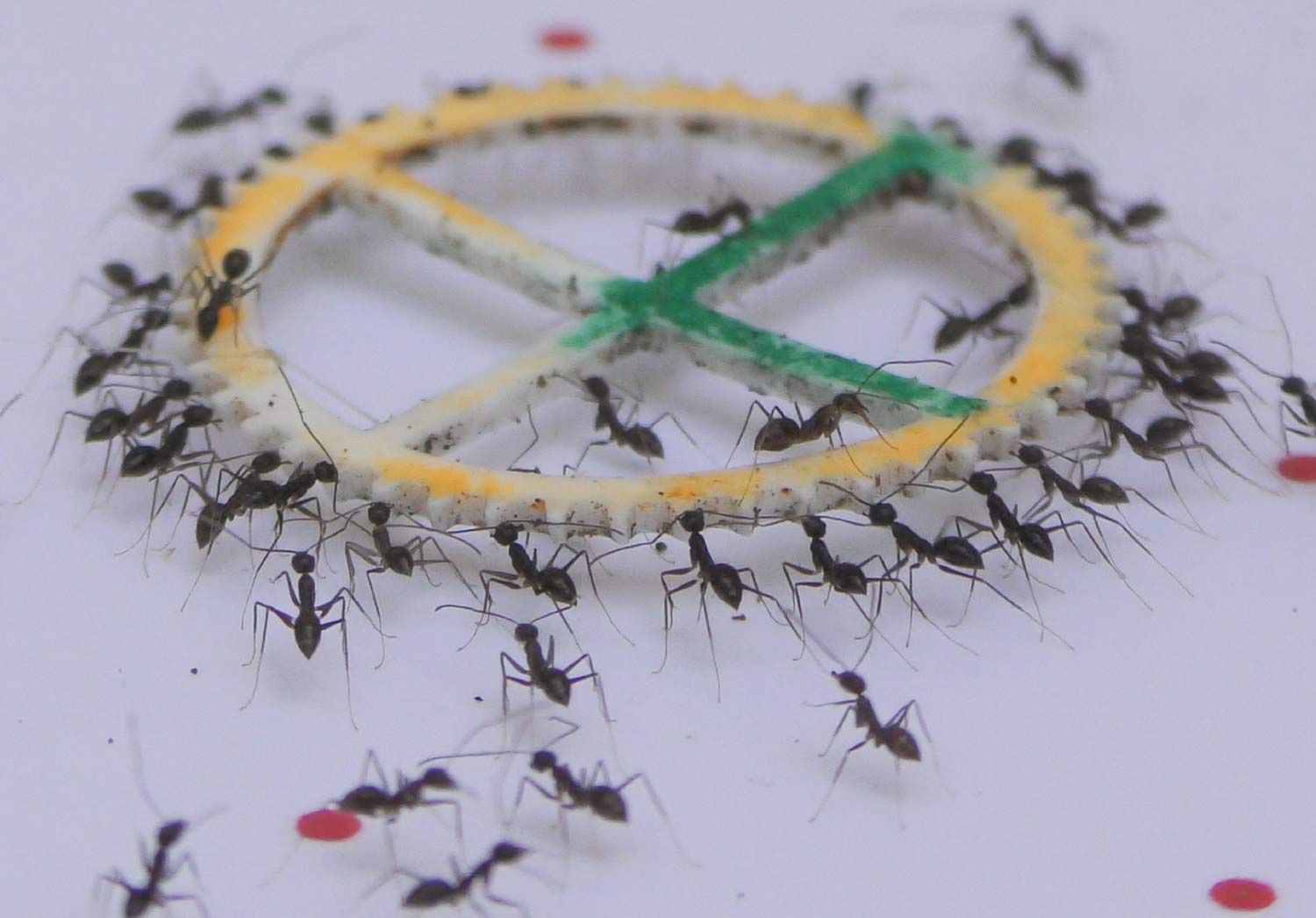 The team have grander ambitions, too. They are devising a system using a rod and pivot to actively communicate with the ants – as the ants push on the rod, the researchers apply a tiny force to tell them which direction to go. Using this, the team can communicate with a single ant or with a whole group, and see how they respond.

Early results from the research suggest that non-carrying ants play a role in the transport process, such as clearing pebbles from the anticipated path the carrying ants will use. And the applications from this research are vast. It includes things like using robots to move items within a warehouse, or even how humans can work together in terms of leadership, conformism and how hierarchies form.

‘Almost everything in biology is cooperative,’ said Dr Feinerman. ‘So after we understand this one system, then you can think to generalise it to other parts of biology including groups of humans. Since the ants have worked together like this for more than 100 million years, we may have something to learn from them.’

While the ANTSolve project has been investigating group cognition, Dr Antoine Wystrach from the University of Toulouse in France is looking at a different type of insect cognition, namely how ants are able to navigate their environment. He is the project coordinator for EMERG-ANT, a project which has devised an intricate virtual reality system to study the movement of ants, which is indistinguishable to the ants from their real world.

Dr Wystrach’s experimental setup involves placing an extremely light ball in a cup, and then causing it to levitate with a burst of air. Using a piece of string, an ant is lowered onto the ball so that its legs are just touching it. Then, a spherical screen surrounding the ant displays a virtual reconstruction of the natural environment near its nest. As the ant moves, the image displayed also moves, making the ant think it is navigating in its natural habitat.

‘Ants are very famous for their collective intelligence.’

‘We want to try to understand memory and learning and the visual part of long routes,’ said Dr Wystrach. ‘How they control their motor behaviour, all that is really cool. So the idea is to have them running in a virtual environment on an airflow treadmill. When the ant is moving, we’re changing what we display in the video. So she’s basically moving through a virtual world.’

Such an experiment would be considerably more difficult in a natural environment, where ants can cover hundreds of metres in a single day. This technique allows the researchers to watch ants over extremely long routes, and see how and where they move, how they move around obstacles, and so on.

More importantly, the experiment allows them to discover how the ants can find their way home. By changing the video on the screen they can place the ants at different locations around their nest, and watch as they recalculate their route home.

‘It’s really surprising how good these ants are,’ said Dr Wystrach. ‘You can put them anywhere along a familiar route, and they will recognise a good route direction.’

This research could help us get a better understanding of how insect brains retain information by observing how ants learn their route in the virtual environment. And this has applications for things like self-driving cars, or cleaning robots like Roombas we use in our homes, which have to autonomously find their way around obstacles to reach a particular destination. Together with projects like ANTSolve, it will tell us more about how insect brains work – and even our own brains – than ever before.

‘Ants are very famous for their collective intelligence,’ said Dr Wystrach. ‘This project, like many others, now starts to see the power of linking ecology and natural behaviour with mechanisms in neuroscience,’ he added, noting that previous research on insect neurobiology had helped them hypothesise how their ants might behave.