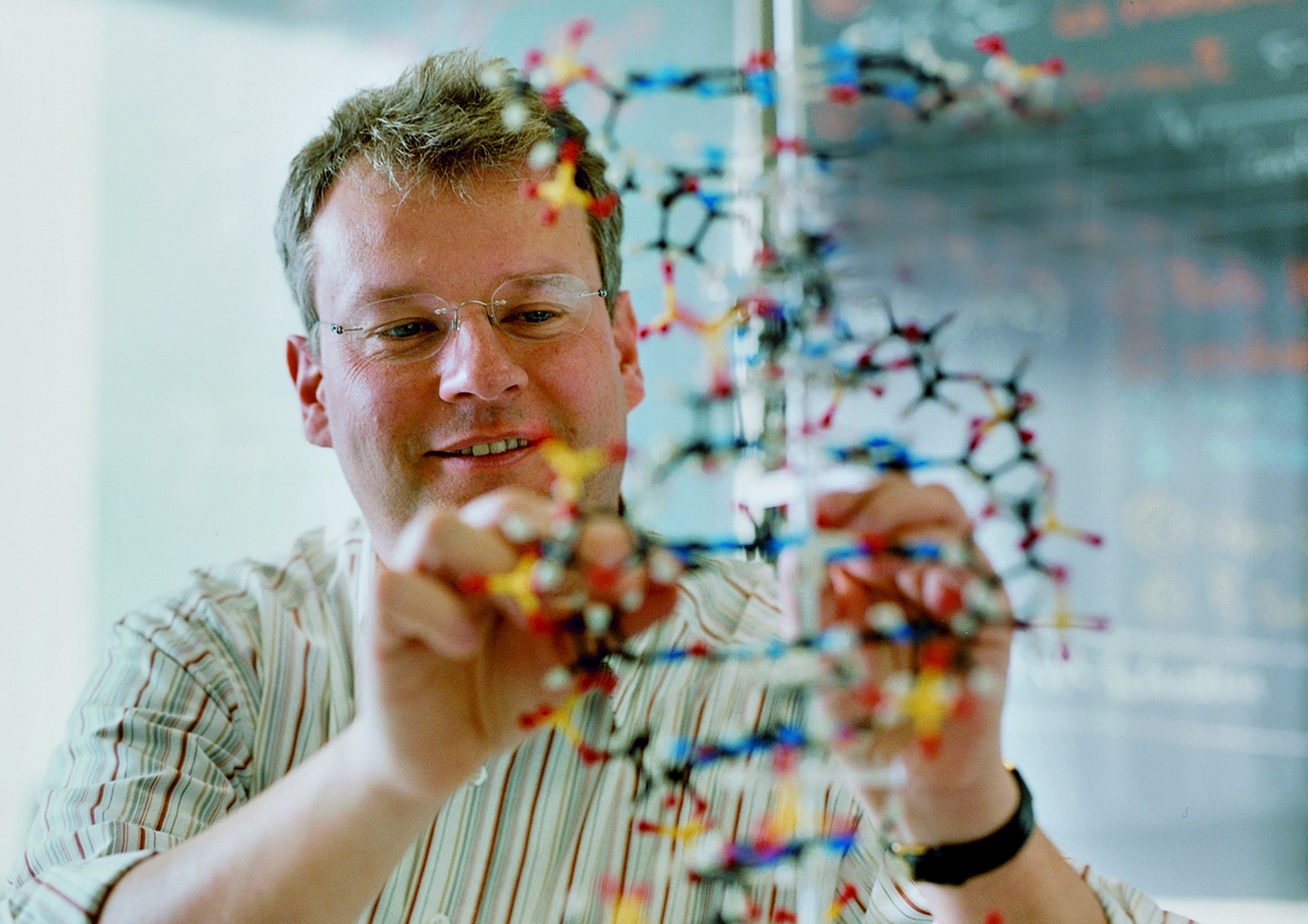 Prof. Thomas Carell is looking at what chemical flags on our DNA and related proteins can tell us about the origins of life. Image credt - Thomas Carell

Evolution could be partly based on environmental adaptation and not just random mutations, re-opening a centuries-old debate between Charles Darwin and Jean-Baptiste Lamarck, according to Professor Thomas Carell from Ludwig Maximilian University in Munich, Germany.

He studies the way our genes are switched on and off over our lifetimes – a process known as epigenetics.

How has scientists’ understanding of our genes changed in recent years?

‘DNA had been considered a static information storage system, but over the past few years we discovered a second genetic code on DNA. There are still the four DNA base pairs (of C, T G and A). Their sequence is like the hardware, but we now know that software sits on top and interprets this information. Chemically speaking, it does this by changing and putting chemical flags on cytosine base pairs (the C in our code).’

Does this mean that our view of DNA as a fixed entity is wrong?

‘The idea of the individual DNA sequence is still correct. If you probe your finger, legs, liver, you get the same string of DNA bases in all your cells. That is not true for the epigenetic information. Most people are still unaware that there is this second layer of information, which is dynamic and which changes. The genome is not so static.’

'Most people are still unaware that there is this second layer of information, which is dynamic and which changes.'

What is the purpose of these DNA flags?

‘We have 200 different cell types in our body, which look different and serve different purposes. To become a skin cell or a neuron, some genes are switched off and others are switched on. The chemical flags act like switches. The little switches sitting in front of the genes can not only turn genes on or off, but act to tune them, so that a gene might be on half the time or only occasionally.’

How much do we know about these flags?

‘So far, science has found four of them for human DNA, and there is possibly one more. Some flags mean stop, others mean go, but others may change genetic activity more subtly. The flags work by attracting certain proteins to the DNA that then turn on or off or change the activity levels of genes (in sending instructions to make proteins).’

What is the significance of these flags in the 19th century debate about evolution?

‘It goes back to one of the earliest controversies in evolutionary research: the quarrel between (Charles) Darwin and (Jean-Baptiste) Lamarck. Darwin proposed that evolution is based on random mutations and that these give some organisms an edge in fitness, allowing them to proliferate. Lamarck proposed that evolution can follow certain pathways, so that if an organ becomes especially important (to one organism), it can be strengthened in the next generation.

‘Darwin won the debate because we found how mutations can be established and lead to a survival advantage. No mechanism was found to support Lamarck. These new dynamic switches may change that. We might have in our hands an explanation for how the environment could influence our genetics.’

Another molecule called RNA, which carries out the instructions encoded by a cell’s DNA, is also controlled by these chemical flags. What’s the significance of this?

‘There are just four or five modified bases to control DNA, but we know of at least 120 modified bases in RNA (a molecule similar to DNA). This is another level of control within a cell.’

You’re now working on the EPiR project to look into the chemical flags on RNA. Can you tell us a bit more about this work?

‘We are looking at the different types of RNA bases, some of which are very exotic, like queuosine and wybutosine. RNA is especially interesting for origin of life studies, something we also are interested in.’

How does it relate to the origins of life?

‘We are asking now if some of the existing unusual RNA bases allow us to look back into this world, before the four main bases of DNA and RNA came to dominate life. It was once thought that the genetics system had just these bases, but we suspect there was a huge range of RNA base types even before life began.‘

What modern day applications could these flags or switches have?

‘Epigenetics – the study of these chemical flags – is of huge importance for the next wave in medicine. We have all grown our own liver, brain, and kidneys. The information on how to grow these organs is present in our bodies. But when our organs are damaged, we are unable to renew them. If we suffer heart failure, unfortunately we cannot repair the damaged heart tissue. Other animals can self-repair, such as lizards re-growing tails, even limbs. If we can learn more about these dynamic switches, we might be able to reactivate genes that allow us to regrow damaged tissues, even organs.’

Are there situations where DNA flags are especially important?

‘Our neurons form connections when we learn, and the branching dendrites (the branches of a neuron) help store memories. In order to grow new dendrites, we have to switch on certain genes, and again it is these flags that do this and prepare the body for learning.

‘Another example comes from the start of life. The genes in sperm and an egg are mostly in a silent state, but when they combine a lot of genes get switched on. The switching on and off of genes must be tightly controlled to get the sequence of the developing foetus right and, again, it is the chemical flags that do this.’

The EPiR project is funded by the EU’s European Research Council. If you liked this article, please consider sharing it on social media.