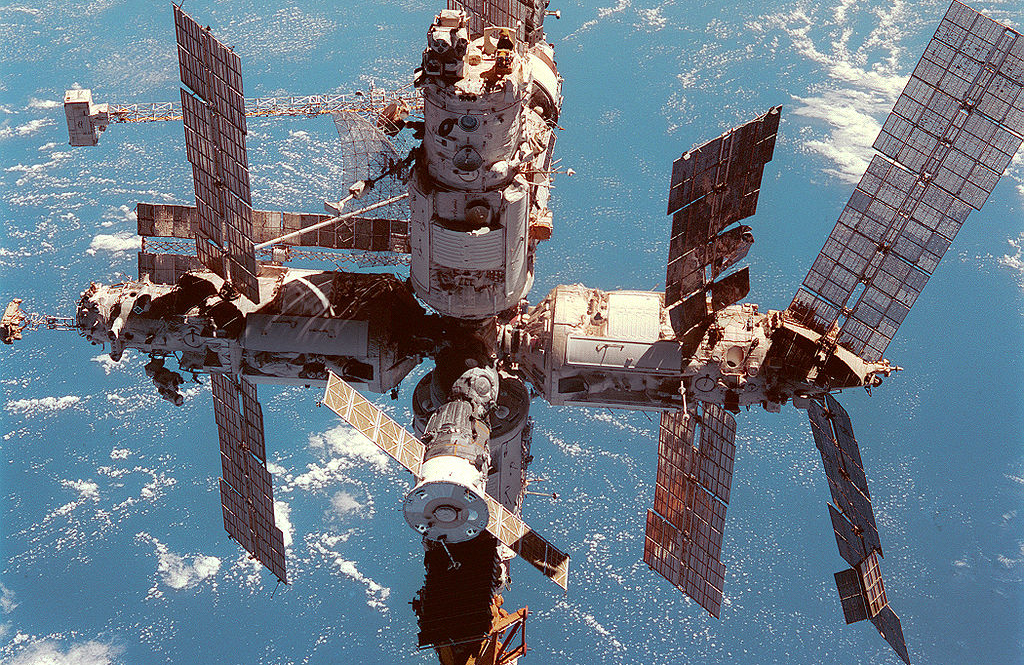 The solar panels for Russia’s MIR space station were damaged due to a collision with space debris, making them less effective. Credit: NASA/Crew of STS-91

This so-called Kessler effect could in theory happen if a space debris collision sets off a chain reaction, with the resulting debris cloud making an entire orbital path unsafe for many years.

Almost 60 years of rocket launches, explosions and collisions have left 300 000 pieces of space junk larger than a EUR 1 coin in low-earth orbit, of which only 19 000 are actively tracked. Due to the high orbital speeds involved, a collision with even the smallest of these fragments could be potentially catastrophic.

A space mission planned for late 2016 will be testing out nets, harpoons and drag sails in an attempt to prove technology that could one day scour low-earth orbit, mopping up fragments of space junk.

‘It will be Europe’s first operational active debris-removal mission and one of the world’s first missions to demonstrate such technologies in the native space environment,’ said Professor Guglielmo Aglietti, Director of the Surrey Space Centre, who coordinates the EU-funded REMOVEDEBRIS project.

Airbus, a partner on the project, will build the net-and-harpoon system. The net’s wide firing angle and weighted tips will make debris easier to capture, and the harpoon includes a locking mechanism to prevent loss of contact after initial capture.

They’ll test the technology out on toaster-sized CubeSats that can be built using off-the-shelf components. The CubeSats will be launched from a larger satellite platform and re-captured as a demonstration of the net’s ability to capture real space debris.

'It will be Europe’s first operational active debris-removal mission'

Does this mean that the new systems will only work for small pieces of debris? Far from it. ‘The net and harpoon concepts have been scaled down for this mission,’ said Dr Jason Forshaw, the Surrey Space Centre's project manager. ‘Both capture technologies were originally conceived for satellites over 1 000 kilogrammes.’

If it all goes according to plan, a full-size mission to capture real space debris could launch within the next ten years.

Another group of researchers is using computer simulations and an atmosphere-bound plane to refine designs for a net system, which they hope to commercialise in 2017.

They’re testing it in zero gravity conditions made famous by the astronaut-training ‘vomit comet’, where a plane flies in a parabolic ascending and descending flight path.

‘Such an approach guarantees that the net is well-suited to the target and even if any element of it should break-off during capturing, it would remain inside the net,’ said Dr Umberto Battista, coordinator of the EU-funded ADR1EN project.

The number of space-debris fragments around earth has grown from relatively few in 1961 to hundreds of thousands in 2013. Video courtesy of the European Space Agency

A longer-term solution to space debris is to reduce the number of used appliances in orbit by pulling them back into the earth’s atmosphere, where they normally burn up.

With so much focus on space-debris capture, de-orbiting the debris might be considered trivial, but as Prof. Juan Sanmartin from the EU-funded BETS project explained, ‘This is certainly not so when you need to be de-orbiting the really dangerous big-satellite stuff … and also reduce duration (of de-orbiting) from the NASA required 25-year upper bound … to say a few months … or even weeks.'

While it would take many years for an out-of-date satellite to fall to earth, space debris can be given a nudge using electrically conductive tethers.

An electrically conductive tether travelling west to east through the earth’s magnetic field produces a current that flows towards the earth. The magnetic field then exerts a force on this current, producing drag and slowing down the spacecraft the tether is attached to.

In order to de-orbit a satellite with a mass of a few tonnes, a tether several kilometres long, yet only a few centimetres wide, is required. However, a tether of this length is much more prone to collisions with the space debris.

The team reduced the probability of this happening in simulations by, ‘moving from round cross-section to thin-tape (flat) tethers,’ said Prof. Sanmartin. ‘This … substantially enhances tether survival against hits by abundant small debris.’

The hardware required for the tether system was built and successfully tested in the laboratory before the completion of the project in 2014. The project partners are now developing the tether system further and may in future test a prototype in space.