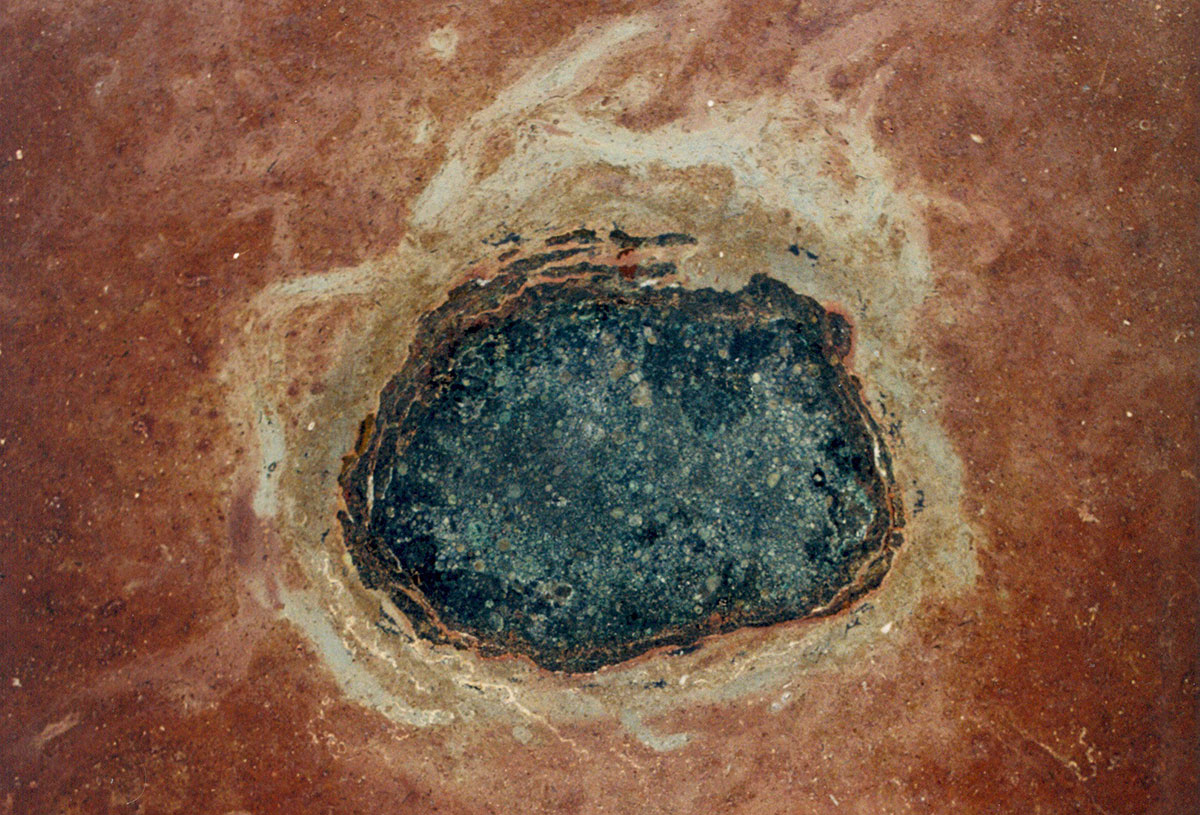 Fossil meteorites from the mid-Ordovician period, around 460 million years ago, indicate that Earth may have been hit by debris from an asteroid collision at that time. Image credit - Birger Schmitz

To be a meteorite hunter means to search for the unutterably rare. On any given patch of land the size of Wales, an average of two olive-sized space rocks will fall in a year. Scientists and collectors are forced to go to extreme lengths to find them, searching in deserts and Antarctica where they have a chance of spotting the stones against a plain background. But if that sounds like a challenge, then how about hunting meteorites that fell to Earth millions of years ago?

Finding fossil meteorites is a whole new level of difficulty because these rocks are not spread thinly on the surface but, like dinosaur fossils, entombed in ancient rocks. But geologist Professor Birger Schmitz at Lund University in Sweden has discovered a way to find them – and not just the odd rock, but sizeable quantities of fossilised space dust.

It turns out that this can paint a unique picture of how the course of ancient life on Earth was influenced by goings on in space – and has already revealed how space dust from an asteroid collision 466 million years ago could have triggered an ice age.

Meteorites are rocks from space that have fallen on Earth, mostly fragments of the asteroids jostling between Mars and Jupiter.

We know that one huge rock smashed into Earth 66 million years ago, killing off the dinosaurs and most other life. This was first hypothesised by Nobel Prize winner Luis Alvarez and his son Walter, both then based at universities in Berkeley, the US. They led the team that discovered a thin iridium-rich ash layer in sediments globally which formed when the dinosaurs became extinct. Iridium is extremely rare in our planet’s crust and so the team concluded that this element had been delivered by a huge asteroid. The implication was that this cataclysm wiped out the dinosaurs, along with three-quarters of all other living things.

Prof. Schmitz did his postdoc with the Alvarez team and it’s fair to say it shaped his career. ‘Until their discovery, the evolution of life and the history of Earth was almost always thought of like a closed system,’ said Prof. Schmitz. ‘I became fascinated by trying to connect what goes on in space with what happens on Earth.’

Returning home to Sweden in 1990, Prof. Schmitz read some newspaper reports saying that an amateur geologist named Mario Tassinari had found a few fossil meteorites in the Thorsberg quarry on the southern shore of Lake Vänern. At this time, there were only a handful of fossil meteorites known to science. Was this a chance to study what meteorites had been like millions of years ago and piece together the effects they had on Earth? Prof. Schmitz called Tassinari and they agreed to collaborate on a systematic study of the quarry.

‘(Many of) these meteorites are as different from the meteorites that fall today as some of the animals that were living in that time are compared to today’s animals.’

The quarry workers carve out sheets of limestone for use as floor tiles. When they find a piece that looks like it might hold a space rock, they call Prof. Schmitz. Each year, they get four or five fossil meteorites. They mostly look like little more than black smudges embedded in the rock, a few centimetres across.

Prof. Schmitz wondered if other quarries might hold similar delights. He also went hunting for meteorites in places with the right kind of floor tiles, such as Paddington station in London.

But it turns out Thorsberg is, as far as we know, a one-off. Special conditions are required to preserve sizeable fossil meteorites in reasonable numbers. You need sediments at the bottom of a body of water that turn to rock very gradually. Slowness is crucial, because that allows more meteorites to accumulate on a small area.

Around 2000, Prof. Schmitz began to think he was finding rather a lot of stones – by this time he had nearly 50 in total. He worked out the amount of rock the quarry workers had carved out each year and divided it by the number of meteorites they found. That told him that back when the rock was formed the flux of meteorites, the number falling on a given area in a given time, was about 100 times greater than it is today. An area the size of Wales would have been getting not two meteorites a year, but 200.

‘I still remember the day I thought of this,’ said Prof. Schmitz. ‘I went immediately to the quarry. “Can I see your logbooks? Are you sure you’ve found such a large number of meteorites in such a small area?”’

There was no mistake. And Prof. Schmitz quickly came up with an explanation. ‘There is one very likely scenario: that if something explodes in space and breaks up into billions and billions of small pieces – well, what we saw in the quarry, that's exactly what would happen.’

In 2004, Prof. Schmitz and researchers at ETH-Zürich, Switzerland, published a paper detailing analyses of the fossil meteorites found. This showed that the meteorites had been in space for relatively short stretches of time – about a million years – by looking at the effect of cosmic rays on their mineralogy. He concluded that a violent collision had exploded them onto an Earth-bound trajectory. Still, these stones were small fry in the grand scheme of things; nowhere near large enough to cause an impact that would significantly affect Earth’s history.

You might think that Prof. Schmitz would have wanted to find something bigger. But it doesn’t work like that. It turns out that hefty meteorites are rare, but smaller ones are more common.

Micrometeorites, otherwise known as space dust, are the most common of all: it’s estimated that today we get showered with 100 tonnes of this stuff each day. Prof. Schmitz reasoned that it must be strewn throughout the limestone in Thorsberg quarry too – if only there was a way to find it.

That gave him an idea, which he investigated through a project called Astrogeobiosphere. ‘I told my poor student the time, “Niklas, take 5 kilograms of rock and dissolve it in hydrochloric acid.”’

Doing so resulted in 10 tiny fragments of extraterrestrial chromite, each a tenth of a millimetre long. And repeating this at intervals in the limestone revealed there was a huge uptick in space dust in 466 million year old rock, results that Prof. Schmitz published in 2019.

The space dust arrival coincides with a cold period known as the mid-Ordovician ice age. Prof. Schmitz concluded that a massive collision in the asteroid belt spewed out both large meteorites and a gargantuan cloud of dust, which blocked lots of sunlight from reaching Earth, leading to an ice age. After the asteroid that killed the dinosaurs, it would be the second example of an event in the wider cosmos profoundly influencing Earth’s story.

‘I think this is a hugely exciting story,’ said Dr Katie Joy, a planetary scientist at the University of Manchester, UK. ‘It’s a massive amount of work and I don’t envy them, having to crush up tonnes and tonnes and rock and passing it through acid.’

She adds that there is still work to be done to understand the biases in the sample. The minerals Prof. Schmitz is studying are not found in every sort of asteroid and comet, which means they do not represent all the rock types that have fallen from space to Earth. ‘This record is a partial record,’ she said.

Through Astrogeobiosphere, Prof. Schmitz has taken this work even further by dissolving 20 tonnes of rock from different quarries, with samples from each representing different periods in Earth’s deep history. The idea was to provide the first sketch of how incoming space dust has varied over time.

He says this work is done and he and his team have a collection of different meteorites that fell on Earth in the distant past – but it won’t be published for a few months. However, fossil meteorites continue to reveal new information about Earth's past.

‘(Many of) these meteorites are as different from the meteorites that fall today as some of the animals that were living in that time are compared to today’s animals,’ he said.