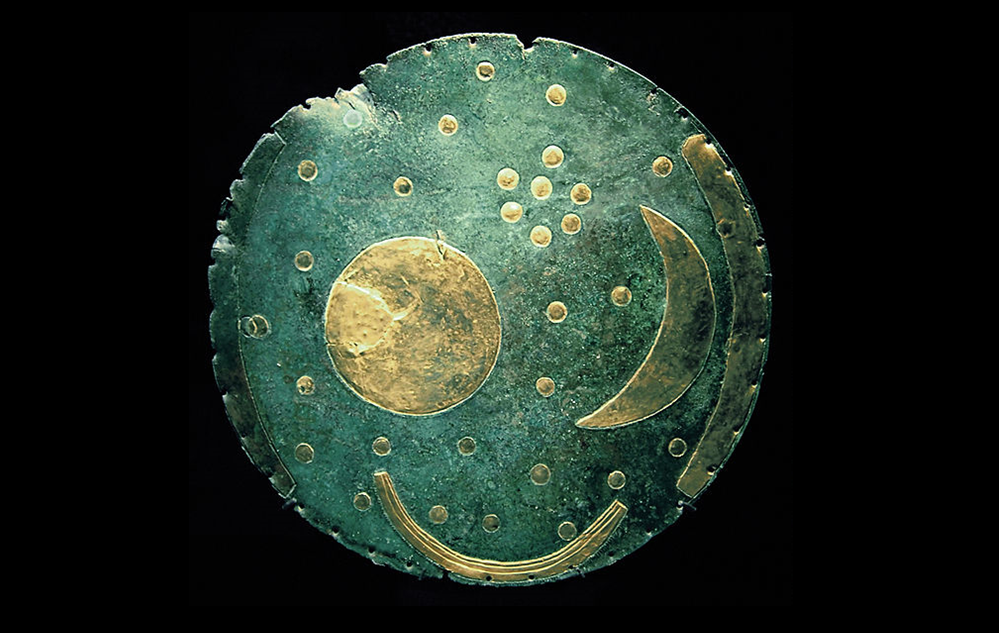 Researchers believe a calendar sky disc from Bronze Age Germany has tin that came from Cornwall, UK. Image credit: ‘Nebra Scheibe’ by Dbachmann is licensed under Creative Commons BY 3.0

There’s a 5 000-year-old mystery to the Bronze Age – where did people then get the tin needed to forge and smelt the dark yellow metal that gives the period its name?

‘This new alloy … appeared first in a region where there is no geological tin, mainly in Mesopotamia,’ explained Dr Ernst Pernicka from the Heidelberg University in Germany. He is leading a team seeking the answer through a new technique that can detect small variations in tin to obtain a kind of fingerprint for an artefact.

All elements have isotopes – varying versions that have the same number of protons but different numbers of neutrons.

Dr Pernicka said: ‘20 years ago nobody would have believed that the isotope ratios of tin are variable in nature. However, with new instrumentation and analytical progress they have now been confirmed, if you can measure precisely enough.

‘We can distinguish via tin isotope ratios between two major tin ore deposits in Europe, mainly Cornwall (in the southwestern tip of England) and the Erzgebirge (Ore Mountains, at the German-Czech border).’

That already led to one interesting discovery in 2010 — that the tin used to make an ancient calendar sky disc from Bronze Age Germany probably came from a Cornish mine, while other objects from the same area used the regional tin sources.

Long before the age of pirates from Penzance, seafarers were likely carrying tin from England to ports throughout the Mediterranean Sea. The BRONZEAGETIN project, funded by the EU’s European Research Council (ERC), is able to perform such measurements because of a recent tool: plasma source mass spectrometry.

The team dissolves the metal and then purifies it. Then the sample of a few billionths of a gram of tin is introduced into an argon plasma that reaches temperatures of 6 000 degrees Celsius and then it is analysed to determine the different isotopes present.

So far, the team has examined artefacts from central Germany and Mesopotamia, and it turns out that the tin trade may have been broader than they had previously thought.

(Article continues after the image)

‘My working hypothesis was that we would find very little variation, because I do not expect that many mines were active at the beginning of the Bronze Age. The result is, surprisingly, that we do have large variations among the bronze objects in the third millennium,’ Dr Pernicka said.

The next step will be seeing if they can match specific isotope signatures to specific mines, and broadening their list of mines to check.

Dr Valentina Gasperini at the University of Liverpool has been working on solving a similarly ancient trade puzzle, this time involving not bronze but pottery imported to Bronze Age Egypt.

‘My idea is that we are still underestimating the amount of movements that were carried out.’

Archaeologists in the twentieth century found numerous imported items in an area southwest of Cairo known as the Faiyum, hinting that the area may have been an outpost for a desert trade.

‘I think we underestimate the amount of movements and exchanges that were going on in the desert,’ Dr Gasperini explained.

Previous digs had shown that there was significant caravan activity in areas of the desert further south. As early archaeologists had brought many of their finds home with them, she began by making a comprehensive examination of artefacts in British and European museum collections that had been only briefly analysed by discoverers at the turn of the century.

‘I created a database and analysed every single item, drew and took photographs, and dated the materials … from the old excavations,’ Dr Gasperini said. As part of the EU-funded TRADES project, she was able to match them with their area of production by examining the elemental composition of the artefacts.

She was especially interested in a city known as Gurob, the site of a former palace and gateway to the Faiyum, which she thinks may have served as the trading post for a desert caravan.

So far, her findings have hinted she might be right. She found the first evidence of oasis products in Gurob - amphora that could have been used to transport wine. That would suggest that there was a road leading through the desert. She is also examining satellite pictures in the hope of spotting ancient connections that could support such a route.

‘My idea is that we are still underestimating the amount of movements that were carried out, even in peripheral areas,’ Gasperini said.