Solving the mysteries of miscarriage 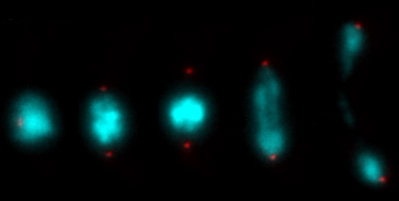 Embryologists are studying the earliest stages of pregnancy in the hope of understanding why it sometimes goes wrong.

Around one in five pregnancies end in miscarriage, but the underlying causes remain something of a mystery. In most cases, miscarriage occurs so early that it goes unnoticed.

Now embryologists want to decode the basic factors that influence the chances of successful fertilisation and implantation. Understanding the cellular mechanics of how a sperm cell and an egg cell combine may be crucial.

Central to this process is meiosis, a form of cell division during which the number of chromosomes in a cell is halved from 46 to 23. In reproduction, two of these cells – one cell from each parent – combine. Irregularities in how these two strings of genetic material zip together can spell the end of the process.

Meiosis can be rough on chromosomes, with DNA getting chopped up and fixed along the way. Telomeres are molecules located at the end of chromosomes that protect them during meiosis. Dr Kazu Tomita of University College London, UK, has been studying the role of telomeres in meiosis as part of the HRMCB project, funded by the EU's European Research Council.

‘There are a lot of unknown factors in the regulation of meiosis so we really don’t know exactly why miscarriage is happening,’ he said. His team has been working with yeast cells, as these provide a useful model for observing cell division.

‘At a crucial point during meiosis chromosomes form a kind of bouquet arrangement,’ he said. ‘We have found that this bouquet is important for shuffling genetic information from the mother and father as well as promotion of meiosis. If this does not happen correctly, it results in infertility.’

Telomeres appear to be essential for faithful meiosis, so much so that people born with abnormally short telomeres can face fertility problems. As we age, our telomeres shorten which is why fertility declines with age. ‘In human eggs, as in all cells, the telomere gets shorter with age. Studies at IVF clinics have shown a correlation between telomere length and success rates,’ Dr Tomita explained.

He says more research is required before a definitive link can be established between telomere length and the risk of miscarriage, and it may transpire that pregnancies spontaneously end due to a combination of several factors. ‘But if miscarriage is primarily about telomeres then, in an IVF setting, women could be tested for telomere length and then treated accordingly.’

The prime candidate for a potential treatment would be telomerase, an enzyme that lengthens telomeres and is already the subject of separate studies on ageing and cancer.

‘The function of telomeres is to protect chromosomes during meiosis but their ability to perform this vital task weakens with age,’ said Dr Tomita. ‘Perhaps telomerase could help to reverse this problem but there is a lot of work to be done to understand exactly what is happening in meiosis.’

Even if male and female cells successfully pair up, some embryos do not make it to the next stage: implantation. Dr Maria-Elena Torres-Padilla at the Helmholtz Zentrum München, Germany, who was previously at IGBMC in France, has been using mouse models to explore reproductive problems.

‘We want to know what makes an embryo suitable for implantation,’ she said. ‘What is the little cellular program that it has to execute after fertilisation?’

Every cell in the body of an individual is genetically identical – they have the same DNA. What makes a hair cell different to a liver cell is how the DNA is ‘read’. ‘It’s all about how DNA is folded,’ she said. ‘DNA in a liver cell is organised differently to how it is in a skin cell.’

So while all cells are reading from the same book – a long list of genetic information contained in DNA – the book can open on different pages.

‘The DNA folding that determines how this layer of placenta cells develops happens at the earliest stage of embryonic development.’ Dr Torres-Padilla has a grant from the EU’s European Research Council which allows her to delve deep into this pre-implantation phase. This work could ultimately help to overcome infertility if dietary or pharmaceutical interventions are shown to influence how DNA is folded and read by cells.

Work in Dr Torres-Padilla’s laboratory has identified molecules that help the embryo ‘decide’ which cells will form the outer layer of cells for implantation, and at which time after fertilisation this decision occurs. ‘Implantation is the key to pregnancy,’ she said. ‘Between 40 % and 50 % of conceptions do not implant – it’s the biggest bottleneck.’