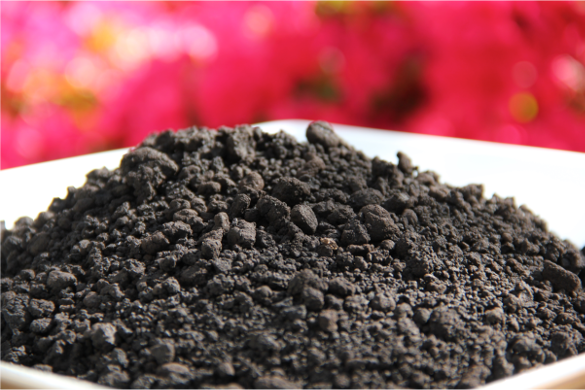 Researchers are looking for ways of replenishing the carbon content of soil, including developing a new soil ingredient called Novihum. Image courtesy of Novihum Technologies

From the Scottish Highlands to the islands of Greece, intensive farming has been depleting Europe’s soils since the Industrial Revolution. According to research performed by Professor Jørgen Eivind Olesen at Aarhus University in Denmark, crop yields in areas of Spain and Italy have dropped by as much as 30 % and farmers further north are also starting to feel the strain.

‘One reason for these observations is climate change,’ said Prof. Olesen, who is an expert on the interaction between agricultural activities and the environment. ‘But a big part of the problem lies in soil quality.’ A recurring symptom in frazzled fields is the low carbon content of their soil.

Soil provides the basis for
90 % of all human food production. Its fertility is particularly important as the world’s population is set to increase dramatically, from 7.3 billion people today to 11.2 billion by 2100, according to the United Nations.

Healthy soil is also vital for our environment, as it not only filters and cleans tens of thousands of cubic kilometres of water each year, but also acts as a so-called carbon sink, storing around a third of the world’s terrestrial CO2.

It is thought that around a third of the world’s soil is currently degraded. It can take thousands of years to form a few centimetres of soil, making the task of protecting our current stock a critical one.

Soils stock more carbon globally than vegetation and the atmosphere combined. This carbon helps retain water and nutrients underground, and also nourishes ecosystems in the soil that keep crops healthy.

Traditionally, farmers replenished the carbon content of soils by fertilising their fields with manure or covering them with straw after the harvest. Not so with intensive farming. Pumping nutrients such as nitrogen, phosphorus and potassium underground makes it possible to harvest more frequently, but it also leaves less time for soils to rebalance the other elements that they need to remain fertile.

According to Prof. Olesen, the soil in some parts of Europe now contains five times less organic carbon than that of neighbouring fields. He has spent the past three years coordinating an EU-funded project called SmartSOIL to understand how this trend can be reversed.

‘There are only two ways to boost the carbon stock in your soil,’ said Prof. Olesen. ‘Either you increase the organic carbon flowing into it or you reduce what is flowing out.’

With these clear objectives and an open mind, his consortium of agricultural researchers has teamed up with farmers from six EU countries to put sustainable farming practices to the test.

Their findings have run up against deeply entrenched assumptions in conventional agriculture. The project’s data on crop yields, for instance, suggests that the benefits of ploughing fields are often outweighed by the loss in subsurface ecosystems, particularly the worms and fungi that help loosen up the soil.

‘You can bury a lot of problems with a plough,’ said Prof. Olesen. ‘But if you want to solve them, you need to look into more skilful agricultural techniques.’

One successful approach has been to alternate crop harvests with grass or alfalfa, because these plants suck up carbon from the atmosphere and bury it under their roots. The consortium has also screened the impact of various forms of biological waste and how they react with different types of soil.

Prof. Olesen warns that SmartSOIL’s techniques tend to require more care and attention than standard intensive farming practices. Still, using them wisely, some farmers have preserved their land while increasing crop yields by up to 10 %.

Dr Peter Langer, CEO of Novihum Technologies in Dresden, Germany, is addressing the challenge of soil depletion from a different angle. Rather than follow the course of nature, his company is using biotechnology to reverse it.

‘You can bury a lot of problems with a plough, but if you want to solve them, you need to look into more skilful agricultural techniques.’

‘We have discovered a chemical reaction that reactivates the carbon molecules in brown coal and turns them into the kind of organic compounds found in fertile soil,’ said Dr Langer.

According to Dr Langer, the secret lies in exposing fossilised carbon to nitrogen and oxygen gases that bind with its structure and offer the inert fuel a new life as a substitute for humus, a carbon-rich ingredient in all healthy soils.

Spreading this granular material, called Novihum, over fields, Dr Langer’s company has restored depleted land to health and boosted crop yields by 20 % to 50 %. Unlike existing soil conditioners, a single treatment with Novihum can restore soil fertility for over a decade.

To date, Novihum has been synthesised in laboratory quantities at the Dresden University of Technology in Germany, but the EU has recently unlocked funds to scale up production by building a 500-square-metre pilot factory. The facility should come online in the summer of 2016 and churn out enough Novihum to recarbonise 200 hectares of depleted soil each year.

Dr Langer stresses that the benefits of restocking soils with carbon extend beyond the sphere of agriculture. Regardless of how rapidly the world kicks its fossil fuels habits, atmospheric CO2 concentrations are already higher than they have been in millions of years. Preserving the climate that has allowed human civilisation to prosper will require some way of extracting carbon from the air and storing it back underground.

The brown bear is one of Europe’s five large carnivores and can sometimes cross paths with people, with potentially fatal consequences. But bears have different personalities and behaviours, say researchers, and understanding this is the key to reducing conflict and protecting both them and humans.