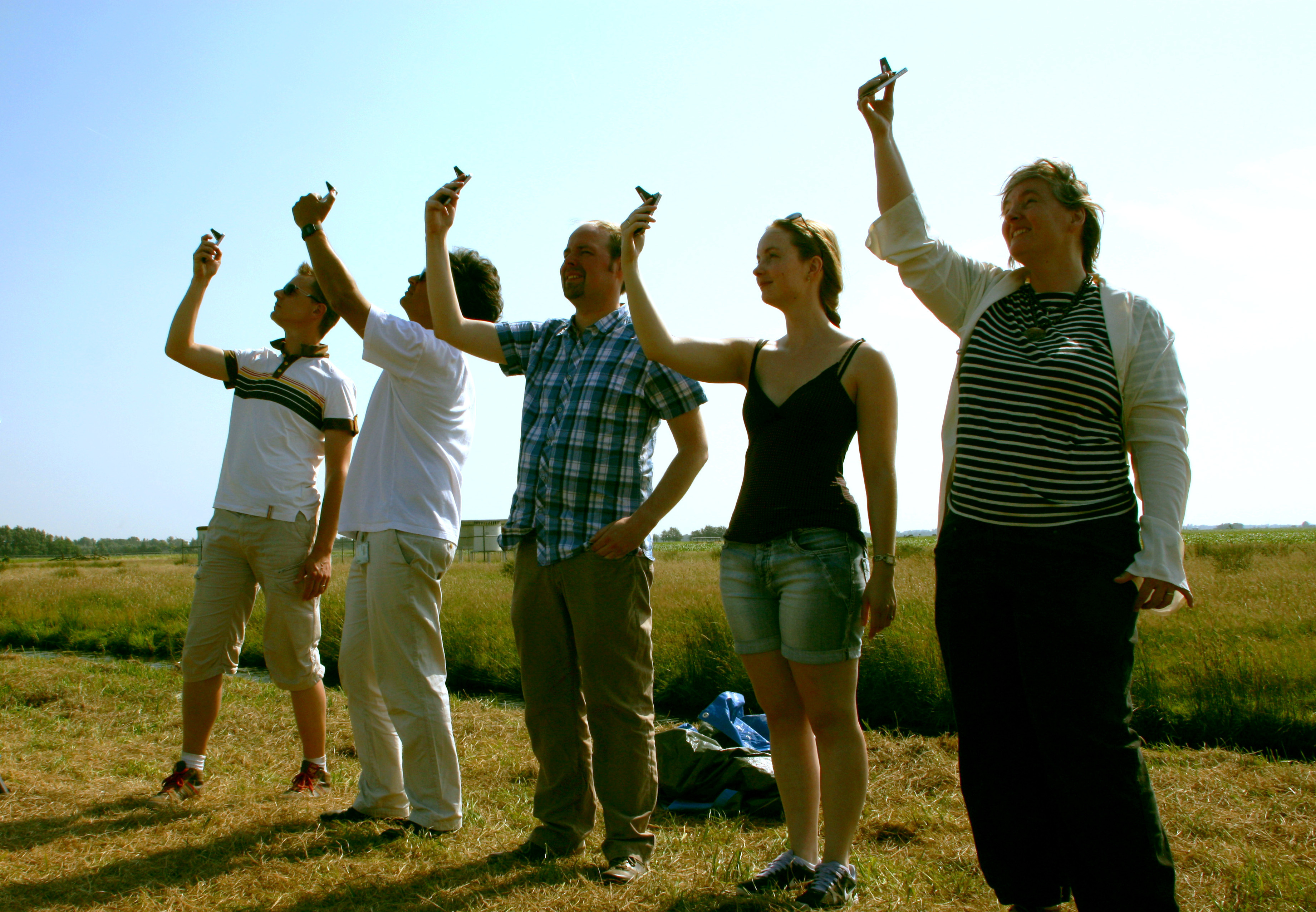 Citizen scientists across the EU are putting a specialised kit onto their phone and gathering data for the iSPEX project. Image courtesy of iSPEX

Thousands of smartphones are turning to the skies in the first EU-wide citizen science experiment to monitor air quality.

‘We provide participants with add-ons that enable their phone to dissect the spectrum and polarisation of sunlight reflected by aerosols in the atmosphere,’ said Elise Hendriks, who runs the iSPEX project from Leiden Observatory in the Netherlands.

‘Smartphones have sensational sensors for optics, sound, geolocation, motion… And we use them to send photos of our cats.’

‘Aerosols are tiny particles that form one of the largest uncertainties in our current estimates of climate change,’ said Hendriks. ‘They also have a serious impact on human health and air traffic.’

The numerous sources of aerosols and their susceptibility to weather conditions make it challenging for scientists to keep track of them. ‘Crowdsourcing the measurements is not only increasing the scope of our research, it is getting citizens involved in answering some of the most vital scientific questions of our time.’

Mattis Gutsche, a Berlin-based animator and graphic designer, is one of the many European citizens collecting data for the project. 'At first, I couldn't see why scientists were asking people to take these measurements,' he said. 'I mean we probably have weather stations that already do the job properly.

'But I admit that there is something nice about being involved in the work. When it is not cloudy, that is.'

In total, 9 000 iSPEX optical kits have been donated by the EU-funded LIGHT2015 project, which is running the experiment, and Leiden Observatory will be collecting measurements until 15 October.

The iSPEX project bypasses some of the typical hurdles of international research by standardising instruments and appealing to volunteers. The benefits run both ways, with participants learning about the capabilities of the tools at their disposal and overcoming apprehensions about their technical abilities.

‘What I find most exciting is how iSPEX uses these jewels of technology that lie idle in our pockets,’ said Professor John Dudley at the University of Franche-Comté in Besançon, France. ‘Smartphones have sensational sensors for optics, sound, geolocation, motion… And we use them to send photos of our cats. What a waste!’

As a European Research Council grantee working on non-linear optics and one of the lead architects of the UN’s Year of Light, he is well acquainted with the rigours of photonic laboratory conditions. Still, he sees areas in which Europe’s citizens have an edge over professional research institutes in this field.

‘Getting national bodies to do anything together is always a challenge,’ he said.

The iSPEX measurement campaign runs alongside science lectures, art shows and even Girl Guide meetings as part of the UN-backed International Year of Light and Light-based Technologies. The idea is to explain the achievements of photonics to millions of people around the world.

‘Photonics studies the harnessing of light,’ said Dr Jorge Rivero Gonzalez at the European Physical Society in Mulhouse, France. As part of the Horizon 2020 LIGHT2015 project, he is helping dozens of activities like iSPEX show people how photonics is transforming their lives.

Discoveries including the blue light-emitting diode, the charge-coupled device, the laser and the fibre optic cable have recently garnered a series of Nobel Prizes and brought us the screens, cameras and internet connections that underpin the ongoing digital revolution.

While we use photonics-based devices everywhere and every day, Dr Rivero Gonzalez points out that few of us have any idea how they work. He hopes that the International Year of Light is helping to bridge this gap by offering audiences of all trades and ages a hands-on introduction to photonics.

If you'd like to join the study, which runs until 15 October, go to the iSPEX site for full instructions, including information on how to access a smartphone add-on and guidelines for taking measurements.

You'll also need to download the app, available for iPhones 4, 4S, 5 or 5S, and live in one of the participating cities.

Once you've submitted your measurement, your data will be colour coded and added to a live map showing aerosol conditions across Europe. Once the study is finished, the final maps will be available on the iSPEX site.