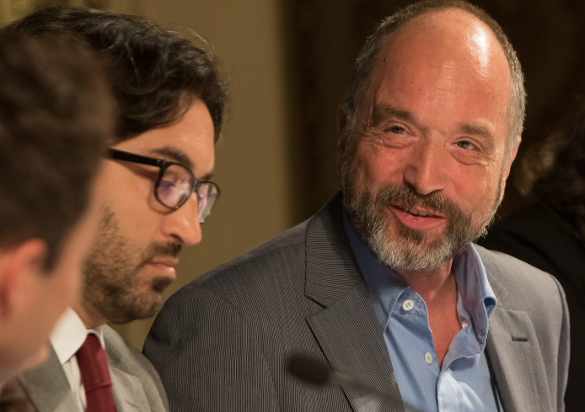 Industry, researchers and citizens will gain influence in the way regional research funding is allocated as a result of the EU's Smart Specialisation strategy, according to Dr Günter Clar, Chairman of a group of experts who analysed how it is contributing to Europe’s goals for growth.

In order to win grants from the European Regional Development Fund (ERDF) – a major part of the EU’s cohesion policy – regions need to develop a Smart Specialisation strategy in research. The expert group you chaired looked in detail and produced a report analysing the effectiveness of this. Why is it important?

‘Smart Specialisation is what successful regions and successful larger companies do in globalised economies. The basic principle is that regions should not imitate others, but rather build their strategies on their own strengths – seen, however, in an international context. They consider their development potential in the context of global value chains, and in relationship to possible partners and competitors outside the region too.’

Why should the EU taxpayer care about Smart Specialisation?

For the period 2014-2020, the EU has set aside approximately EUR 350 billion, roughly a third of its budget, for cohesion policy, which is aimed at reducing disparities between EU regions and helping create growth and jobs.

One of the cohesion policy funds, the European Regional Development  Fund (ERDF), focuses its investments on several key priority areas, one of them being research and innovation.

In order for less-developed and well-developed regions to get access to the funding, they need to develop a Research and Innovation Strategy for Smart Specialisation (RIS3).

‘Getting more social and economic returns on taxpayers’ money from investments in research and innovation is the basic message. Successful companies and a competent and well-paid workforce increase per se the quality of life in a region, and also generate the taxes and competences needed for the inclusive development of the society.

‘Better-informed and more consensual investment strategies mean less-risky research projects, attract more public and private funds, and are thus more likely to contribute to a more competitive and innovative regional economy - if the governance structures are right, and if the local companies are able to apply the results to their own business activities.’

Where is this new cohesion policy approach working well?

‘We see that this new approach is already bearing fruit, has triggered motivating and motivated initiatives in the regions, but, not surprisingly, there is still a long and bumpy road ahead. In general, there is more progress on the side of the advanced regions, but good examples can also be found in smaller countries like Estonia or Latvia, or southern and eastern regions, which we have highlighted in our report.

‘We definitively see progress in policy cooperation too. At EU level between different Commission services by, for example, jointly developing guidance documentation, but also between the regions. The Vanguard Initiative, for example, takes the ERDF funding obtained through Smart Specialisation as a starting base. With additional own funds and optimising the use of other EU funding programmes, Vanguard regions aim to optimise the synergies and complementarities in their Smart Specialisation strategies to boost world-class clusters and networks. For example, they cooperate in life sciences, making renewable energies more accessible, for example the transport of hydrogen, or bio-based materials, or in 3D printing where Flanders (Belgium) is world class.’

And that’s exactly what the policy was meant to achieve?

‘Yes, and it is not necessarily a question of money, but also of a change of mindsets, of policy approach, of process. In developing Smart Specialisation strategies there is an important participative process, which is called the Entrepreneurial Discovery Process. You involve the different actors in your innovation system to find out what their strengths really are, and where they see the most promising development potential. In my region, Baden-Württemberg (Germany), where less than 1 % of funding for private and public research and innovation comes from the ERDF contribution, the government had organised a competition called RegioWIN. No top-down decision was made on what would be an appropriate geographic size or consortium size to apply for the funding. Rather, the people could decide what they considered a functional region, and where they could implement their contributions to help in the overall development of Baden-Württemberg.’

‘It is not necessarily a question of money, but also of a change of mindsets.’

What needs to be done to replicate this in other regions?

‘The mixed results with Smart Specalisation so far do not come as a surprise given the EU reality, where few regions invest more than 3 % of their gross domestic product in research and innovation and this figure is barely 0.5 % in less developed regions. Our assessment showed that, across the EU, key differences in Smart Specialisation success can be related to competences and governance. Independent of the so-called traditional improvement potential in the different regions, it is key to invest more in capacity building - strategic, methodological and also management - because weaknesses in these fields are the source for many deficiencies in the development and implementation of research and innovation strategies. We could, for example, rely on the Smart Specialisation Platform based at the EU’s Joint Research Centre in Seville (Spain), which already supports regions with guiding tools and organises peer reviews successfully. A diversification of their training offers could bring progress concerning capacity building, specific needs of specific groups of regions, or other challenges identified so far.’

‘Yes, and we have elaborated a long list of recommendations – operational, strategic, and policy ones. Some mean just learning from successful examples, and some mean fundamental structural changes. Participative decision approaches, for example, such as the one underlying Smart Specialisation, are currently not mainstream, neither in the regions nor in Brussels. Broader participation means that some people will have more influence on research and innovation investments than earlier – for the benefit of their regions in the long run. During the transition phase, however, the changes in roles and influence could be difficult and need time.’