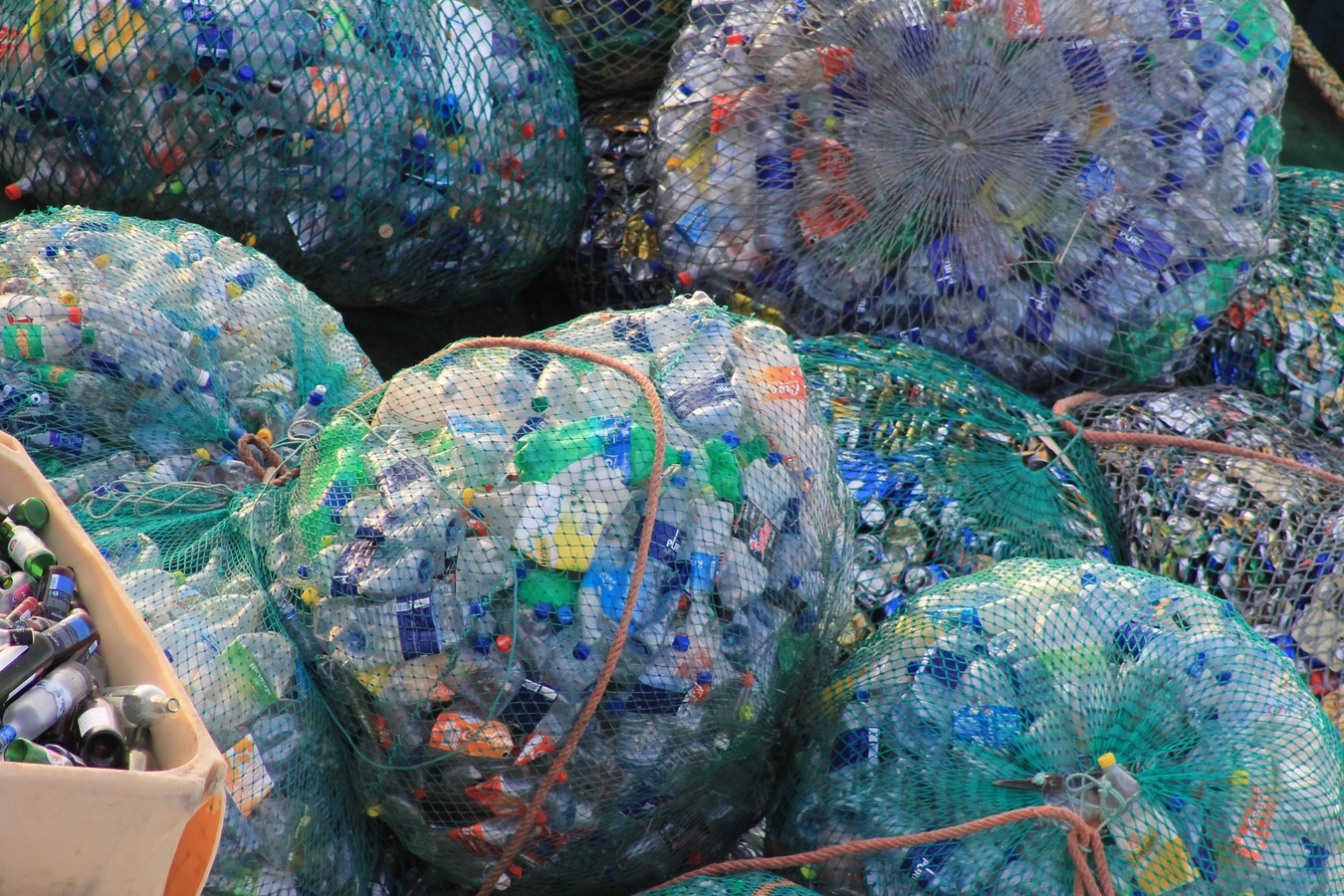 Smart recycling containers that reward people for proper use could help drive up the rate of plastic recycling, reducing the amount of plastic that goes into oceans and landfill, and creating business opportunities out of the challenge to cut back on waste.

It’s part of a wave of innovations aiming to keep plastic circulating in the economy, which also include a way to turn empty bottles back into raw materials and a new supply chain model enabling the recycling of plastics from electronic waste.

Cesar Aliaga from the ITENE Research Centre in Valencia, Spain, says that it’s a challenge that can only be tackled if everyone in the recycling industry works together — and the first step is to encourage people to recycle properly.

He coordinates a project called PlastiCircle, which is developing a smart container for apartment buildings or neighbourhoods with the aim of increasing the proportion of waste that is recycled and reducing the amount sent to landfill.

‘The aim of the smart collection container is to make it easier for citizens to separate waste,’ said Aliaga, ‘but also to tell who is doing it well and to reward them for this behaviour.’

Equipped with arrays of sensors, the containers will be able to sense the quality and quantity of the waste deposited, as well as who is doing the depositing.

'The aim of the smart collection container is to make it easier for citizens to separate waste, but also to tell who is doing it well and to reward them for this behaviour.'

As an incentive, those people or neighbourhoods separating waste correctly could receive benefits like reduced city rubbish taxes or decide to spend such savings on community projects.

But a smart container is just the start — once sensors in the container detect it’s full enough, they alert the waste truck, which is optimised for efficiency with both compacting systems and pickup routes based on container and city data fed into a cloud platform.

Aliaga says the project’s partners are developing an innovative sorting system to more efficiently separate the different plastics collected, combining a range of scanning and imaging technologies with the near-infrared sensing traditionally used to sort plastics.

‘About 30% of plastic is recycled, but with (most) packaging waste this material is currently only used for low-end applications,’ said Aliaga.

‘There is plenty of room to boost reuse of plastics and our idea is to use this in new, high-value applications ... such as automotive parts with Centro Ricerche FIAT, roofing membranes, garbage bags and high-quality urban furniture,’ he said.

PlastiCircle will, in the next few years, launch project pilots in neighbourhoods of Valencia, Alba lulia in Romania, and Utrecht in the Netherlands.

If successful, initiatives like this could be vital for hitting the EU’s strategic goals for plastics in a circular economy, which aim for all plastics packaging to be recyclable by 2030, in addition to a proposed crackdown banning single-use plastics, like straws and cotton buds.

The 2030 targets essentially require that plastic is kept in circulation, with waste products being turned into new resources circulating in biological and technical loops.

Sadly, the current reality is far from circular. Less than 30% of the more than 25.8 million tonnes of plastic Europe produces every year is recycled.

Even ignoring the huge CO2 emissions and environmental impacts this has, let alone the need for oil as an input for the majority of these plastics, Europe is sitting on a potential goldmine — the plastic material lost every year represents €10.56 billion in wasted resources.

Garbo is an Italian company that’s trying to prove there’s good money in making plastic circular. They are tweaking a chemical process known as glycolysis to recycle polyethylene terephthalate (PET), very often the base element of plastic bottles.

The current problem, says Garbo’s general director Fabio Fizzotti, is that only a small percentage of recycled PET pellets can be used in new bottles, while the low demand for coloured PET bottles and other PET waste sees this go to landfill or incinerators.

Under a project called ChemPET, which finished last year, Garbo found it could efficiently use glycolysis to dissolve and break down PET-containing plastics into a form that can be used to create new PET bottles without the need for any virgin plastic.

‘Technically speaking, we can recycle any kind of PET, and in the long-term such recovered materials must be cheaper — you cannot convince people to create a project without (an) economic reason,’ said Fizzotti. ‘But in Italy, people have to pay several hundred euros per tonne to burn the waste, so at that point, we can be competitive with virgin plastics.’

With a successful trial run out of the way, Fizzotti says the right funding could see Garbo opening its first plant capable of treating 50 tonnes per day within six months, thanks to its experience and facilities for glycolysis recycling of silicon powders for the solar industry.

He says this could expand to 100 tonnes per day with further partners and easily be scaled to factories across Europe, with no lack of raw materials available in the EU.

‘The amount of refuse in Europe is so high that 100 tonnes per day is just a small part of the pie. Even looking at black, carbon-coloured bottles, these are not recoverable with normal recycling methods and there are huge amounts of this just being burnt for thermal recovery.’

However, one of the biggest sources of unrecycled plastic is waste electrical and electronic equipment (WEEE). Europeans throw away, on average, 16.6 kg of plastic WEEE every year, with the bloc annual total expected to reach 12 million tonnes by 2020.

According to Violeta Nikolova of the United Nations University in Bonn, Germany, one of the barriers to recycling WEEE is that there are outdated misconceptions about the value, quality and attractiveness of recycled plastics.

‘For costs and benefits, for example, investing in recycled plastics would soon be essentially the same as investing in virgin plastics, with the difference of being able to tap into a fast-growing e-waste stream that contains billions of euros worth of plastic materials,’ says Nikolova.

She works on the PolyCE project, which is aiming to create a circular economy supply chain for WEEE plastics. Over the next three years, the project, which is led by the Fraunhofer Institute IZM in Berlin, Germany, will develop a grading system for recycling plastics based on their material properties and potential applications, and draw up guidelines for designing new electronics with recycled plastics.

Their work includes technical innovations such as the development of a purer recycled plastic that removes toxic flame-retardants — thus creating a product appealing to the whole supply chain, from designers to consumers.

The project is also developing attractive, colourful demo products to prove that recycled plastics are no longer the grey, inferior products of yesteryear. The specific ideas are still under wraps but partners include Dutch electronics firm Philips, American appliance manufacturer Whirlpool and Finnish start-up Circular Devices.

Nikolova says the role of this in winning over consumers and product designers is important as then companies will begin to sit up and take notice.

‘Once you have the buy-in from the consumer, this is key as bigger companies will then take the lead in introducing recycled products, followed by competitors and smaller businesses in the supply chain — and then policy-driven incentives help with scaling this recycling up.’

On 28 May the European Commission launched legislation that aims to cut down on the amount of single-use plastics in the EU.

It also requires EU Member States to reduce the use of plastic food containers and drinks cups through national targets, and collect 90% of all single-use plastic drinks bottles by 2025.

Producers are obliged to cover the cost of waste collection, transport and treatment for products such as food wrappers, cigarette butts, wet wipes, balloons and plastic bags, while items such as sanitary towels, wet wipes and balloons now have to be labelled with information on the plastic they contain and the appropriate waste disposal method.