Sloths: how did two different animals wind up looking so similar? 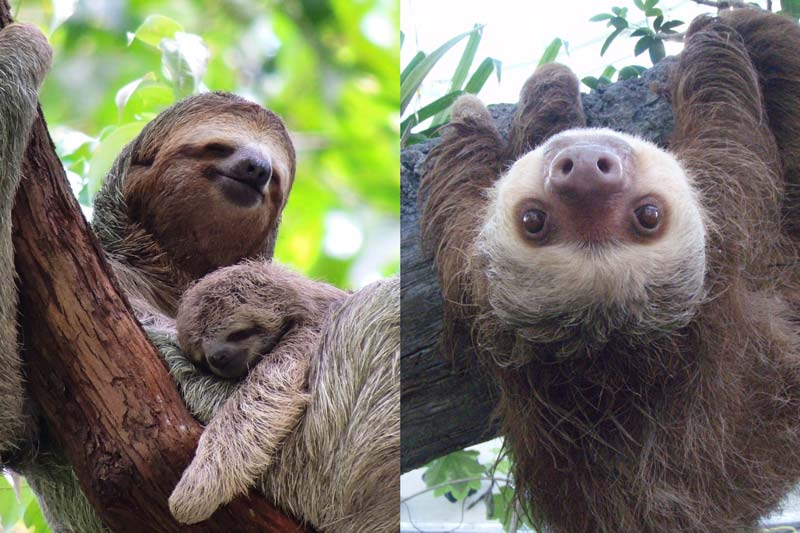 The brown-throated sloth has three toes and adapted to life in the trees before the two-toed sloth did. Image Credit - Flickr/Harry and Rowena Kennedy CC BY-NC-ND 4.0/ CC BY 3.0

Sloths and guppies appear to have little in common – one is an arboreal mammal living in the slow lane, while the other is a tiny tropical fish with a frantic existence. Yet both could hold the key to better understanding a fundamental process of evolution.

Hanging lazily from tree branches where they barely move for hours on end, sloths hardly seem like born survivors. Yet the sloths that creep through the rainforest canopies of Central and South America are the last remaining members of a group of animals that has roamed the Earth for at least 30 million years and once boasted hundreds of species.

Many of their extinct cousins were giants – some larger than elephants – that spent most of their time on the ground before they died out 10,000 years ago at the end of the last ice age. Modern sloths, however, are thought to have avoided the extinctions that wiped out their larger relatives because they ascended into the trees.

But what makes their survival more extraordinary is that the two types of modern sloths – the two-toed and the three-toed sloths – are thought to have adapted to life in the trees entirely independently of each other. They are an example of what is known in biology as convergent evolution – a process where species develop similar adaptations to a habitat through different evolutionary routes.

‘When you look at them hanging in the trees, the two look very similar,’ said Dr Marcela Uliano da Silva, a computational biologist at the Leibniz Institute for Zoo and Wildlife Research in Berlin, Germany.

‘(But) they have different numbers of toes on their forelimbs and the way the muscles connect from the body to the bones in the arms is also different,’ she said.

These physical differences are signs that two-toed and three-toed sloths found their own ways to adapt to a lifestyle in the trees. They are thought to have last shared a common ground-dwelling ancestor about 30 million years ago, which is around the same time that humans split from baboons on the evolutionary tree.

In most cases, evolution tends to follow a classic route where species diversify from a common ancestor to adapt to different habitats and challenges. Modern sloths, however, are an example of where evolution has gone in the opposite direction by separately adapting to have very similar lives in the trees.

The three-toed sloth was the first to adopt an arboreal lifestyle before the ancestors of the two-toed did the same millions of years later.

Over time those two types of sloths evolved into six species – two species with two toes and four with three toes.

Dr Uliano da Silva and her colleague Dr Camila Mazzoni are hoping to solve the mystery of how these two sloth types came to share similar traits with a project called CONVGENOMS.

Over the past year they have been using advanced DNA sequencing techniques to piece together the genome of the Linnaeus’s two-toed sloth, which has the scientific name Choloepus didactylus.

‘We are creating a high-quality reference that we can then compare to the genomes of other sloths and mammals,’ said Dr Uliano da Silva.

They are currently compiling the huge amounts of genetic data they have obtained and will soon start focusing on some of the more interesting genes to find out what their function is.

The pair hope to next begin sequencing the genomes of three-toed sloths, known by the scientific name Bradypus, derived from the Greek words for slow foot.

When complete, their work will form part of the wider Vertebrate Genomes Project, which is aiming to compile reference genomes for all 66,000 living vertebrate species on Earth.

Armed with the genomes of the two sloth types, the scientists will work with other researchers studying the genomes of extinct sloth species to begin looking for genes that played a role in helping the animals adapt to life in the trees.

‘That is going to be the final step to actually understand the convergence itself as we can see how the sloths are different from each other,’ said Dr Mazzoni. ‘So if they converged in similar ways by using the same metabolic pathways, or even the same genes and the same proteins, then we can start correlating this with the function these convey.’

While the evolutionary convergence between sloths occurred over millions of years, researchers are hoping to watch the process as it is happening in a very different kind of animal - guppies. Dr Bonnie Fraser, an evolutionary geneticist at the University of Exeter, UK, is studying the genomes of Trinidadian guppies, tiny fish found living in the rivers in the north of the Caribbean island.

Along these rivers are waterfalls that create natural barriers that corral predators and guppies into pools. But while the larger predators, such as the pike cichlid, are trapped in the pools below waterfalls, the agile guppies – which grow little more than 1-2cm in length – have been able to scale them to find sanctuary in the safer pools above.

‘Convergent evolution is often one of the best examples we have of natural selection.’

Many of the rivers are also isolated from each other by mountains, meaning guppies in the safe pools in one river are adapting to life without predators separately from those in the hunter-free havens in neighbouring rivers.

‘This means you have independent evolution of traits that are suited to low predation in the pools above the waterfalls,’ said Dr Fraser, who is studying the fish in a project called GUPPYCon.

‘Low-predation guppies are bigger, more colourful, they mature at a later age and give birth to fewer, but larger offspring. They also have different behaviour as they are a lot easier to collect in low-predation pools. Those living alongside predators are faster and mature much more quickly so they can pass on their genes to the next generation before they are eaten.’

Scientists have been able to study this convergent evolution in action by transferring guppies from predator-filled pools and placing them in safe pools out of reach of the carnivorous fish.

‘We see time and again these fish start to take on the traits we see in low-predation guppies,’ said Dr Fraser. ‘And it happens really quickly. One study showed it happening in about four years, which is about 12 generations.’

Dr Fraser is looking at genes from 14 different populations to see how these traits have developed. Among the fish she is studying are four populations that scientists deliberately removed from high-predation pools in 2008, 1981, 1978 and in the 1950s and placed in isolated pools with no predators to see how they would adapt.

‘Are they using the same genes to adapt or are they taking different routes to the same adaptation?’ she said.

By scanning the genomes of the fish from different pools, she is hoping to find signals of natural selection that have driven the fish to adapt to their different environments, such as a gene or set of genes that repeatedly occur in separate populations.

She is also planning to conduct breeding experiments in an attempt to understand what physical or behavioural traits these genes then provide the fish.

‘Convergent evolution is often one of the best examples we have of natural selection,’ said Dr Fraser. ‘If you see the same trait being selected again and again, it has to be adaptive. But on the flipside, it also tells us about the limitations of evolution. Why aren’t all sorts of adaptations and phenotypes possible?

‘Evolution is constrained by all sorts of different factors ... We are only just now starting to unravel this.’

Sloths, which are related to armadillos and anteaters, have the lowest energy requirements of any living mammal. They can spend up to 30 days digesting a single meal.

Living off a diet of just leaves, three-toed sloths have to eat almost continuously. Their two-toed cousins add fruit and insects to their diet, and so have a slightly higher energy intake.

But in both types of sloth, their slow metabolism means they will often only make a trip to the toilet – an adventure that involves clambering down the tree to the ground before defecating – once every week or so.

Sloths also have low internal body temperatures compared to most mammals which means they are almost reptile like in their behaviour, climbing up into the sun to warm up and down into the shade to reduce their temperature.