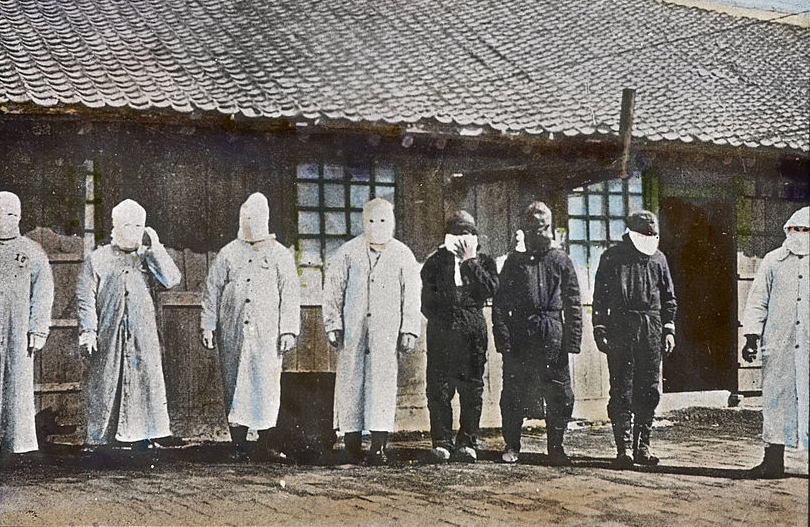 Scientists have unearthed photographs taken in countries including China during third plague pandemic, which killed 12 million people between the mid-19th and mid-20th centuries. Credit - Centre for the Study of World Christianity, University of Edinburgh/ reference number GB 237 CSWC47/LS8/45

New portraits of the evolution of some of history’s deadliest pandemics have been created through analysis of thousands of skeletons and new collections of historical photographs - and the results could indicate how similar diseases may evolve in the future.

Genetic material from infectious diseases such as tuberculosis and the plague leave fossil traces of themselves in human teeth, and scientists have used this fact to identify fatal diseases from the past 5 000 years in mass graves and archaeological excavations all over the world.

Professor Johannes Krause, director of the Max Planck Institute for the Science of Human History, Germany, used molecular fossil records to build a genetic profile of Yersinia pestis – the organism behind the Black Death that ravaged Europe in the 14th century. Beginning in 2013 and funded through the APGREID project, Prof. Krause’s team obtained skeletons from as far afield as Africa, Asia and the Americas, as well as Europe.

After isolating remnants of bacteria from the skeletal remains, the team pieced together the bugs’ evolutionary histories – demonstrating how the bacteria have changed over the centuries. They were astounded to find that they could trace Yersinia pestis back to the late stone age, and watch it emerge in two major events in European history – first as the Justinian Plague, which afflicted the eastern Roman Empire in the sixth century, and then as the Black Death in the 14th century.

‘Before this people just inferred the past from modern day genomes but all those papers have been wrong by at least a factor of ten.’

The team then went on to isolate other pathogens. ‘It’s quite incredible how many bacterial strains we have been able to reconstruct from the past,’ said Prof. Krause. ‘It is very exciting. We have reconstructed first plague, then leprosy, tuberculosis, Helicobacter pylori, Salmonella enterica and we are working currently on syphilis.’

They have been able to calculate each disease’s mutation rate. The faster this is, the more rapidly the bug can potentially adapt to the environment around it. Leprosy, for example, turns out to have mutated only 20 times in the last thousand years, putting it at low risk of the type of changes which would make it more infectious or antibiotic resistant.

Tuberculosis, on the other hand, has mutated about 200 times in the same period – much faster than was previously thought.

‘Before this, people just inferred the past from modern-day genomes but all those papers have been wrong by at least a factor of 10,’ said Prof. Krause.

Extracting the DNA posed several challenges. The soil in which bodies are laid to rest leaches thousands of different microbes into skeletons – so that over 99 % of the DNA extracted from an ancient skeleton doesn’t come from that human at all. Most of the remaining 1 % is the human’s own DNA – only a tiny fraction of it is from that human’s personal tribe of microbes – including disease-causing bacteria. As a result, Prof. Krause and his team were searching for DNA that formed only about a thousandth part of the genetic material they extracted.

The team transformed the laborious process of pinpointing the right DNA by inventing algorithms which take advantage of the increased computing power that has become available in recent years.

‘If you take DNA from an ancient skeleton and then you want to know, for every DNA fragment, what organism it comes from – that usually would have taken half a year or so per sample,’ said Prof. Krause.

The big advantage of his team’s new algorithm – known as MALT – is speed. It can examine one billion DNA fragments in 24 hours and identify which organism each one comes from.

The team included pathologists who examined the skeletons for physical legacies of the diseases they endured – often left as markings on the bone. Combining the approaches, they were able to reconstruct the entire genome of Yersinia pestis for the first time from ancient skeletons, as well as its modulations over time.

‘We can see various steps where the new genes come in and the virulence of the bacterium changes,’ said Prof. Krause.

They could see, for example, the moment where a mutation emerged that allowed the bug to colonise fleas – and thus become a far more deadly threat to humans.

The scientists now believe they can predict how, and how quickly, the bacteria will change in the future – helping us understand what threat they will pose to humans and how quickly they may develop antibiotic resistance.

Another portrait of Yersinia pestis is emerging from a team that has been scouring the world for photographs of the outbreak of the third plague pandemic – the wave that killed 12 million people across the world between 1894 and the mid-20th century.

In 1894, photography was a recent invention, so this was the first time that an epidemic was photographed, according to Dr Christos Lynteris, a medical anthropologist at the University of St Andrews, UK, who leads the VR3PP project.

Dr Lynteris's project has uncovered and digitised a treasure trove of images from locations ranging from South Africa and India to the US and China. They include a collection from so-called Fort Plague – an island fort near St. Petersburg, Russia, that was converted into a giant plague laboratory.

The photographs reveal much about attitudes to the disease amongst different medical schools and countries – and amongst the photographers who took the pictures.

Many countries created plague commissions that travelled and photographed outbreaks in ways that reflected their theories about the disease. A series of Chinese photographs from the Manchurian plague outbreak of 1910-1911, for example, consists mostly of bird’s-eye views of slums and images of dark, claustrophobic alleyways. Chinese migrant workers – or coolies – were seen as spreaders of disease, and the slums they lived in were thought to be a source of infection. The research team believed that urban planning was the key to combatting plague, and that slums should be burned, says Dr Lynteris.

‘There is no single corpse in the Chinese album,’ he said.

A Russian plague commission operating in Manchuria at the time, in contrast, which believed that replacing burials with cremation was the key, produced images of 'horrific corpses' and of failed attempts to burn bodies on the frozen steppes.

In other places at other times, plague officials focused on different concerns. For example, ten years earlier in San Francisco, US, the public health office photographed almost every house in Chinatown – including almost every interior room. ‘This reflected concerns that somehow it’s urban structures or housing structures or ways of habitation which are particularly conducive to plague,’ said Dr Lynteris.

Photography brought new ideas on health and science into public awareness, for example the concept of zoonosis – diseases that jump from animals to humans. It also encouraged international cooperation on world health. The cultural interests of the photographers, who were often colonial, has also emerged. For example, practices such as burials, which seemed exotic to the photographers, were disproportionately photographed and may have distorted understanding of how the plague was spread, says Dr Lynteris.