SKA 'time machine' will be able to detect formation of first stars, galaxies 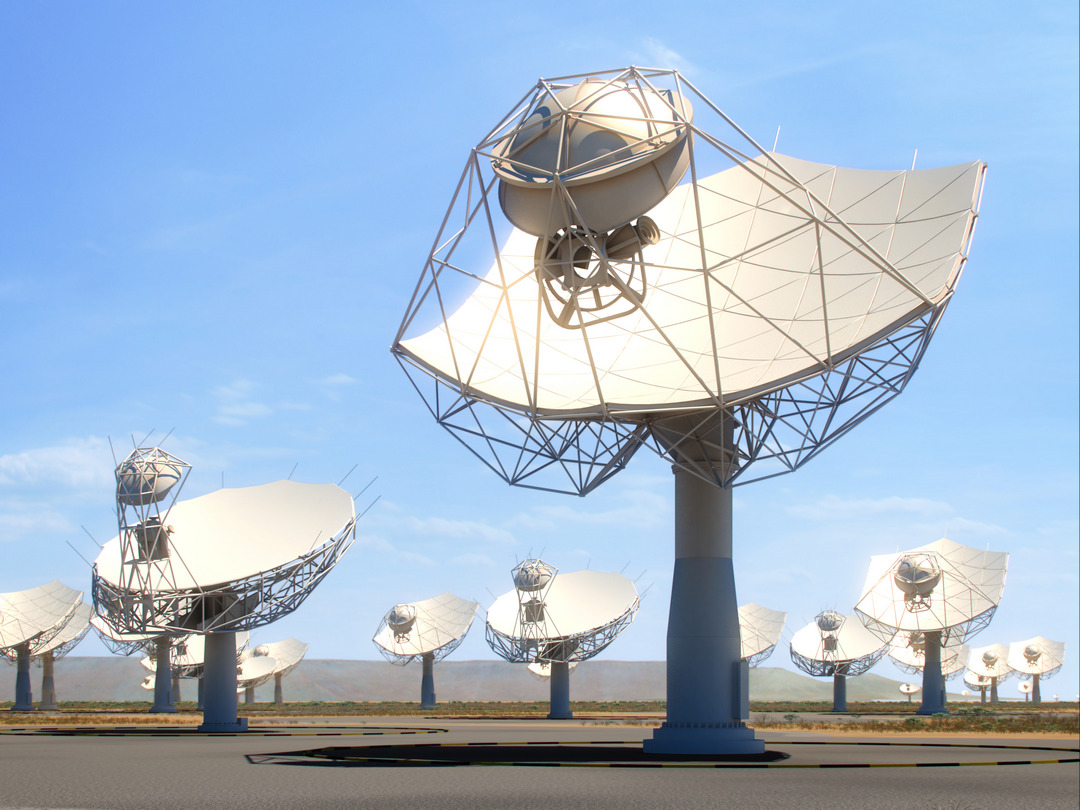 The Square Kilometre Array, which is depicted through an artist's impression, will begin construction in 2020. Image credit - SKA Organisation

The world’s largest radio telescope, known as the Square Kilometre Array (SKA) and situated over two continents, will be able to detect the first stars and galaxies emerging from the ‘murk’ at the beginning of the universe and much more besides, according to Professor Phil Diamond, Director General of SKA.

He spoke to Horizon at the opening of the Shared Sky art exhibition in Brussels, Belgium on 16 April, where indigenous artists from SKA host nations South Africa and Australia use traditional painting and folk art to explore the themes of astronomy, spirituality and a borderless sky.

Could you describe SKA and what it means to ordinary people on the street?

‘It’s the next generation radio telescope and unlike something like Jodrell Bank (a British radio astronomy observatory, where the SKA is headquartered) we’re not building a massive monolithic telescope. It’s much more effective to build networks of smaller telescopes. Smaller telescopes are individually a lot cheaper but we can spread them across the Earth. In the SKA case, we’re spreading them across 150km in South Africa and 65km in Australia in a first stage. That acts kind of like a zoom lens so we can pick out more detail than these big monolithic single dishes can.’

Why have these locations been chosen for this investment?

‘(We were) searching for the best sites in the world for the SKA. A key characteristic is radio quietness, we've got to get away from people because everything we live with in the modern world just generates radio interference, which is analogous to shining a torch down an optical telescope. It severely limits our ability to study the universe. We looked for these remote areas of the world and two stood out - Western Australia and South Africa. One (site) is 800km from Perth, the other is 800km from Cape Town.’

'We will actually see the first stars, the first galaxies forming in the universe.'

How will the SKA advance the field of radio astronomy?

‘The two sites will have different technologies. We’ll have about 130,000 two-metre-tall metal antennas spread over 65km of the Western Australian desert. One of their prime goals is to study the evolution of hydrogen, the most common element in the universe, all the way back to the Big Bang. It is effectively a time machine.’

‘In South Africa we will have dishes and they will be operating at higher frequency. With that, we will be studying a huge range of phenomena - pulsars, galaxies, molecular clouds, the origins of life, black holes, the magnetic universe – the two telescopes together truly enable a massive range. We’ve got a 2,000 page book that describes the science that the SKA will do. The first phase of the SKA will be able to pick up signals five times weaker than the current state of the art.’

How will you know the SKA has been successful?

‘We’ve got two very high priority science goals that we want to achieve ... in the first five years. What we will detect is supermassive black holes merging - these are a million times the size of our sun, sitting in the centre of galaxies and as they merge they generate these truly enormous gravitational waves but (with) different characteristics than those that LIGO and VIRGO (gravitational observatories) are sensitive to.

‘Another (goal) is detecting the so-called Epoch of Reionisation. During the first few hundred million years after the Big Bang, the universe was essentially a hot plasma that’s cooling into gas - most of the gas was hydrogen. But then … the first stars started to form and they kicked up UV (ultraviolet) radiation which started to ionise the universe and started to clear the fog and we will actually see the first stars, the first galaxies forming in the universe as it starts to come out of that murk. We should – most certainly will – be able to detect that moment that this reionisation of the universe occurs.’

Tell us about some key milestones ahead for the SKA project?

‘Since early 2013 till now we’ve been developing the design, putting prototypes in the field. This year (we have) what we call the critical design reviews and March 2019 is when we do the final critical design review of the whole system. This is basically the last critical engineering milestone ahead of the construction of the project, allowing us to develop the construction proposal. Another milestone which we hope will happen in September of this year, is ministers from the partner countries getting together and signing a treaty which will turn the SKA into a treaty organisation - something like CERN (the European Organization for Nuclear Research) or ESA (the European Space Agency).’

When do the lights come on at the SKA?

‘We hope to start construction in 2020. Construction will take a total of about seven years but we don’t need the whole system before we (begin observing), because it’s an interferometer (combining signals from different sources). When we’ve got our first 32 antennas, we will put them together with the prototype correlator system and we hope to start doing some early science well before we get a last piece of hardware in on the ground and integrated. Early science we expect to start doing around 2025.’

You’re in Brussels to open the Shared Sky art exhibition. How does it reflect the role of the SKA in scientific knowledge and human culture?

‘Both of those (South African San and Australian Wajarri Yamatji) communities have oral traditions - sometimes very similar actually, which is quite intriguing - stretching back many tens of thousands of years, of what the sky is and the things they see up in the sky – their versions of the constellations. In Australia, the modern representation of these things is in the so-called dot paintings produced by the local artists for this exhibition which either reflect objects in the sky or the telescopes that we're going to build on the ground. In South Africa, the tradition is more one of quilt-making, which is a different form of expression, and so what we did was bring the artists together.

‘We see this as part of a broader engagement with the local community. On top of art we are also engaged in the education of local young people, signing local contracts, bringing jobs to the area and so on, and the positive impact we are having locally starts to be apparent.

The Shared Sky touring exhibition will be in Brussels, Belgium, until 28 April.

The SKA consortium is at present a non-profit company with 10 members including  Australia, Canada, China, India, Italy, the Netherlands, New Zealand, South Africa, Sweden and the United Kingdom.

The consortium works with and is in discussions with other countries who have expressed an interest in becoming involved, including France, Germany, Japan, Portugal and Spain.

The design activities of the Square Kilometre Array project are partly funded by the EU. If you liked this article, please consider sharing it on social media.