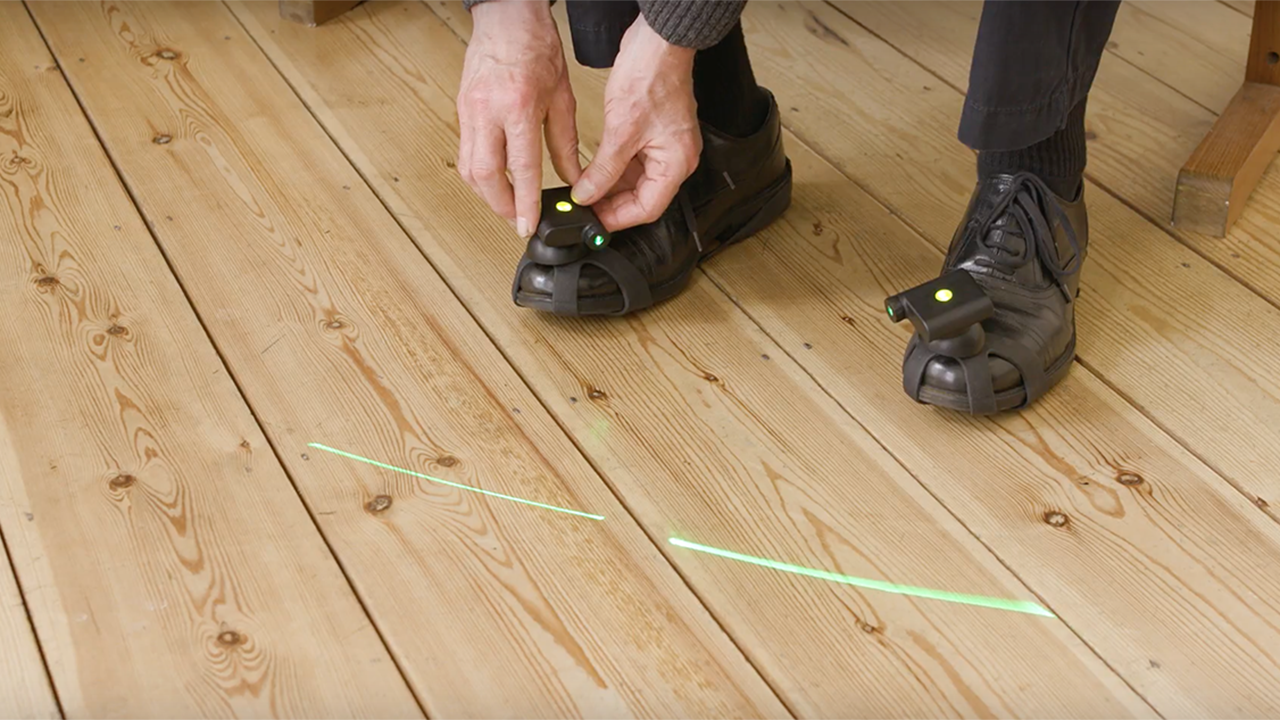 Having an external visual cue such as a line has been shown to reduce the number of freezing episodes in Parkinson's patients. Image credit - Walk With Path

A shoe-mounted laser beam that helps people with Parkinson’s disease ‘unfreeze’ by shining a green line in front of their feet has been awarded the EU’s €1 million Horizon Prize for Social Innovation.

The Path Finder device was invented in 2014 by Danish entrepreneur Lise Pape, whose father suffers from Parkinson’s disease. It aims to help people overcome a particular symptom of the disease - freezing of gait - in which people stop walking and are unable to restart.

‘People describe it as this feeling of being glued to the floor and being unable to step forward with their feet, despite having the intention to do so,’ said Pape. ‘In fact, 70% of all falls in Parkinson’s are thought to be due to this symptom.’

One peculiarity of gait freezing is that it is relatively easy for people to overcome – if they have an external visual cue to help them keep going. ‘What researchers found is that people mostly struggle on flat floors, whereas on staircases people are generally fine (because) they have this rhythm for every step,’ said Pape.

The Path Finder builds on this principle by using a small laser that clips on to someone’s shoe and projects a green line in front of their foot, replicating the idea of having a stair to climb.

‘Our device … is in a way converting the staircase into a wearable product that you can have with you so you don’t have to change your environment,’ said Pape, who explains that it works by helping people to focus their attention on walking. Studies have shown that the laser shoes significantly reduce the number of freezing episodes as well as the amount of time someone is frozen.

In 2017, Pape’s company Walk With Path, took its product to market as a medical device, selling it to both individuals and health care systems mostly in Norway, Denmark and the UK. With the prize money, she wants to better promote her device in Europe and launch in the US market.

The Horizon Prize for Social Innovation, which is awarded for the best solutions to improve the mobility of older people, was presented to Pape by Carlos Moedas, the EU’s Commissioner for Research, Science and Innovation, on 24 September in Brussels, Belgium.

The idea behind social innovation is to find solutions to societal problems and this year’s prize focuses on one of Europe’s major challenges over the next century, an ageing society. According to the European Commission’s own statistics, the proportion of Europeans aged over 65 will grow from 17.5% in 2010 to nearly 30% by 2060.

‘What researchers found is that people (with Parkinson’s disease) mostly struggle on flat floors, whereas on staircases people are generally fine (because) they have this rhythm for every step.’

Wearable technology was a recurring theme among the shortlisted projects, with Switzerland-based MyoSwiss awarded one of two €250,000 runner-up prizes for its Myosuit - robotic trousers designed to strengthen muscles.

The Myosuit, which is designed to help people walk and keep active by providing assistance at the hip and knee joints, acts like an ‘wearable muscle’, according to co-founder and CEO Jaime Duarte.

‘From a mechanical point of view, it works very similarly to how muscles work,’ he said, explaining that having muscles attached to bones by tendons enables the muscles to be located away from the joints they control, reducing bulk.

‘In our fingers we actually have the motors, or the muscles, quite far away from where our fingers are. The motors themselves are in the forearm. We do something similar in our system.’ 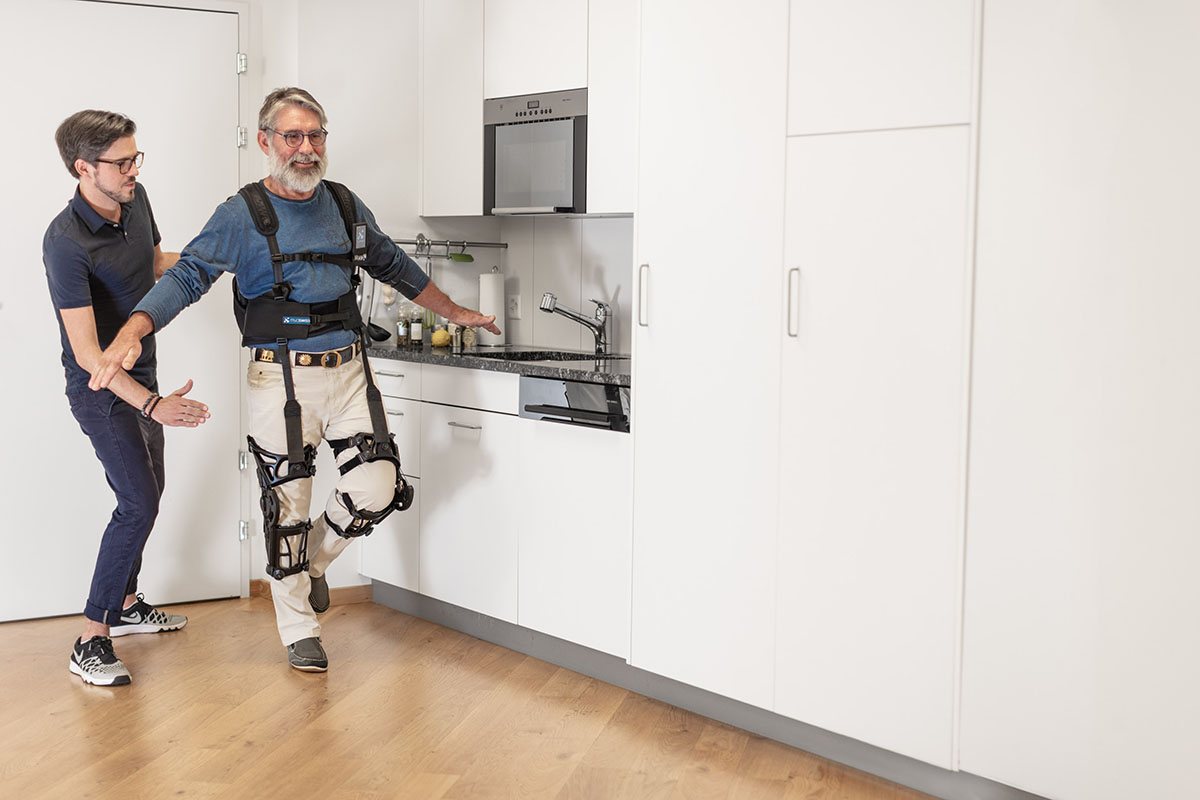 The 5kg suit, which is marketed at health professionals such as physiotherapists, consists of a backpack, containing a motor, joined by cables to mechanical supports at the hip and knee. It works on the same principle as an electric bike – the user does a certain proportion of the work themselves and is aided by the technology where necessary.

It’s aimed at people with conditions such as muscular dystrophy or multiple sclerosis, those recovering from injuries or strokes and people who are experiencing muscle weakness with age. What makes their product innovative, says Duarte, is that it enables people to keep moving and preserve, or even improve, their muscle function.

‘When people have weakness of their legs, one of the most-used solutions today is wheelchairs,’ he said. ‘But once you start using technology like a wheelchair then your legs become even weaker.’

Keeping people moving is not just about physical help, however.

A third prize of €250,000 was awarded to the Municipality of Toulouse, France, who developed the Montoulouse senior card in order to increase the participation of seniors in municipal activities. The card gives people over 60 free access to museums, cultural events, libraries and sports facilities, as well as discounts at restaurants, social events. When people reach 65, or 62 for retirees, they also receive discounts on city bikes, metro, trams and buses.

The Horizon Prize for Social Innovation is funded by the EU. If you liked this article, please consider sharing it on social media.