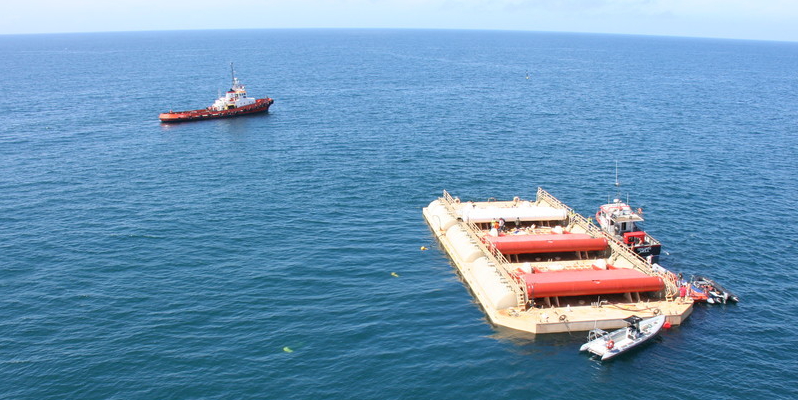 The WaveRoller is taken out to sea on a barge and will sit at the bottom of the ocean and harness wave energy to produce electricity. Image courtesy of WaveRoller

A device that can convert the kinetic energy of the waves into electricity that can be fed into the grid has won a EUR 10 million loan from the EU to enable its Finnish developer to build the first full-scale demonstration unit.

It’s the kind of technology that society needs to rely on more and more as fossil fuel power is phased out in order to reduce greenhouse gas emissions and reign in global warming.

Despite being home to four of the world’s top ten universities, European inventors often struggle to translate their ideas into high-tech businesses.

One reason for this is that innovative start-ups can fail to get the funding to build the large-scale prototypes needed develop their ideas into commercially viable technology.

The original idea came from a professional diver, Rauno Koivusaari, who had a moment of inspiration when diving in a shipwreck and seeing the way an old piece of hatch moved backwards and forwards with the waves.

Finnish company AW-Energy translated Koivusaari’s idea into WaveRoller – a system that consists of an underwater panel attached to the bottom of the ocean on a hinge which moves back and forth as the waves surge past it.

Hydraulic pumps attached to the panel drive a motor which, in turn, drives an electricity generator, and the resulting power is taken on shore by an undersea cable.

Now AW-Energy has the finance to build a full-scale demonstration device thanks to the EUR 10 million loan from the European Commission and the European Investment Bank (EIB).

The loan is part of the EU’s Energy Demonstration Project programme, which has earmarked a total of EUR 150 million to help companies demonstrate the commercial viability of their renewable energy or hydrogen fuel cell technologies.

‘We want to support renewable energy pioneers to contribute solutions to global climate change challenges, while generating employment and sustainable economic growth at home in Europe,’ Carlos Moedas, European Commissioner for Research, Science and Innovation, said during a signing ceremony on 6 July in Brussels, Belgium.

John Liljelund, chief executive of AW-Energy, explained during the event that ocean energy can be used to provide a complement to wind and solar energy.

‘Ocean energy is the largest untapped resource in renewables,’ he said. ‘This is a significant milestone not only for WaveRoller and the wave energy sector, but for the ocean energy industry as a whole, which is currently at the brink of a commercial breakthrough.’

He said that the advantage of wave energy is that it is more constant and predictable than other renewable energy sources, and provides the ‘missing part of the puzzle’.

‘Whereas with wind, we can still forecast accurately seven to eight hours in advance, with waves, for example, we can do it three to five days ahead,’ he said. ‘It means that we have a highly valuable resource of renewable energy in our hands. Adding this to the energy mix enables us to balance the grid and add more renewables to the system.’

The company already has three 100-kilowatt units connected to the electricity grid near Peniche in Portugal, which were built with the support of the EU-funded SURGE project. They will now use the InnovFin finance, which will be complemented by funds from Tekes, the Finnish Funding Agency for Innovation, to build a full-scale 350-kilowatt device in the same area, in order to demonstrate the commercial potential of the technology. The project is set to cost EUR 19 million in all.

The idea behind the InnovFin Energy Demonstration Project programme is to provide finance to help companies bridge the so-called valley of death gap between technological innovation and commercialisation. AW-Energy already has potential deals in six countries for its WaveRoller technology and hopes to sell 50 units over the next four years.

‘This is a significant milestone not only for WaveRoller and the wave energy sector, but for the ocean energy industry as a whole, which is currently at the brink of a commercial breakthrough.’

EIB vice-president Jan Vapaavuori said during the signing ceremony that while energy is not the only industry where companies find it hard to commercialise their products, the bank has committed at least 25 % of its lending portfolio to companies that are developing technology that helps us tackle or adapt to climate change.

‘There is a big gap in every sector where you are going from demonstration to commercialisation. But energy is one of the priorities for both the (European) Commission and the bank. I think it would be hard to underestimate the importance of this type of pilot project that can open up untapped sources of clean energy.

‘We do, in the bank, really believe that innovation, innovation and innovation are the most important factors in the each and every day harder global competition,’ he said.

Commissioner Moedas said this programme was just one of a number of measures that the EU is taking to tackle market failures in financing innovative technologies, with another being the forthcoming establishment of a venture capital fund of funds.