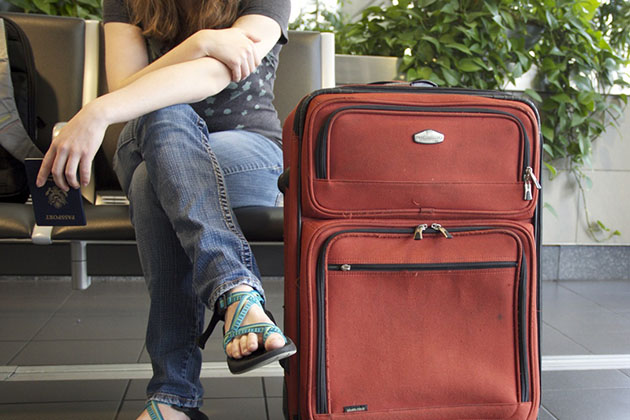 Seperating the traveller and luggage early on can significantly reduce waiting times during travel. Image credit - Pxhere/725806, licensed under CC0

Aircraft seats that temporarily shrink and a joined-up transport system that allows people to easily plan a door-to-door journey could help shift people’s first choice of travel away from cars and towards public transport by reducing the time and effort involved.

That’s the hope of scientists who are working to increase the level of multimodality – using several different types of transport during one journey. It’s the European year of multimodality in 2018 and the idea is to encourage people to use public transport more regularly in order to ease congestion in cities and for the environmental and health benefits of having fewer cars on the road.

‘It’s pretty clear that the attractiveness of the car as door-to door mode of transport is very strong,’ said Kier Fitch of the European Commission, speaking at a talk on improving door-to-door travel around the EU during the Transport Research Arena conference in Vienna, Austria, in April.

But, it’s clear that improvements need to be made in many cities before public transport systems can be seen as genuinely viable alternatives to the car.

Fitch stressed that public transport had to step up its game to provide fast and reliable travel options with back-ups to passengers, saying: ‘Providing reassurance is important – people need to know that they will be able to re-plan their journey quickly and easily if something goes wrong.’

Professor Andrea Detti of the University of Rome Tor Vergata in Italy has spent the last three years designing and developing a platform to help optimise the door-to-door transport of passengers and goods using various means of transport, as part of a project called BonVoyage.

He says the team spent a considerable length of time developing algorithms that computed the best way for someone to move from A to B, but encountered difficulties when transport operators were unwilling to hand over the required data.

‘If you are a company that wants to create a journey planning software, you need data,’ said Prof. Detti. ‘My feeling is that transport operators do not like to disclose their data. This reluctance in opening their data may slow down the pace of future multimodal planning systems, especially for small, young, companies that want to enter the market.’

To tackle this, the project proposed a more structured, federated system of exploiting the planning services offered by the transport operators, rather than their data.

‘My conclusion is that moving from open data to a federation of open services may accelerate the deployment of multimodal journey services in Europe, opening the market not only to major stakeholders but also to small local ones,’ said Prof. Detti. ‘Everyone, big or small, should have a part in the door-to-door planning to effectively single out the best choices,’ he said.

Another idea proposed by researchers in the Netherlands is to cut down the door-do-door journey times for people travelling by air by introducing the concepts of self-travelling luggage and shrinking seats.

'If you are a company that wants to create a journey planning software, you need data.'

The PASSME project, which finishes at the end of May 2018, is a collaboration between researchers, interior design companies and communications experts that aims to come up with time-saving innovations for airport and aircraft interiors and processes in order to make them more efficient.

‘PASSME’s ambition is to create a one-hour reduction (in travelling time taken to travel by plane) between the origin and the destination,’ said Professor Sicco Santema of Delft University of Technology in the Netherlands, who coordinates the project.

The team has been working with Amsterdam and Hamburg airports as well as KLM airlines to analyse how people move through airports and to identify where bottlenecks occur. They found that airport security checks and boarding aircraft are huge time sucks, and that luggage flow of both checked-in and carry-on bags can increase the unwanted time spent in an airport by 30 minutes.

As a result they are investigating the impact of a self-travelling luggage system, where the passenger and the bags travel completely independently of each other. According to their research, the sooner a passenger is separated from his or her luggage, the better, both in terms of time and experience.

Door-to-door delivery services that take luggage directly from a person’s home to their destination already exist today, and PASSME envisages a future where this is commonplace.

The project also developed a unique aircraft seat that temporarily shrinks and then reverts to its original position after boarding. It reduces boarding times by five minutes, by temporarily doubling the width of the aisles to allow passengers to pass easily, even if others are arranging their luggage.

‘We can decrease the width of the chairs in the aircraft and therefore the aisle will be twice as wide. And therefore the boarding and disembarking will be much quicker, which is not so important in the total travel time, but if an aircraft doesn’t depart on time, it will be delayed. So the effect is quite strong,’ said Prof. Santema.