Sensors in your smartphone could make roads greener 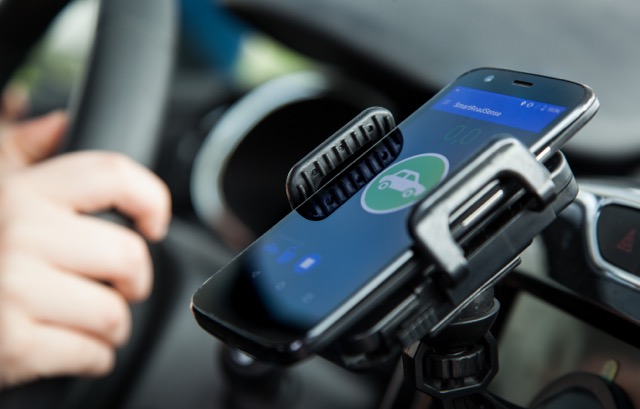 By combining car sharing apps with a smartphone’s ability to measure movement and vibration, researchers are hoping to make roads greener.

Using information from a smartphone sensor that measures acceleration, the EU-funded CROWD4ROADS project will harness data to determine where roads are damaged or uneven.

‘The smoother the road surface the lower the emissions,’ said Professor Alessandro Bogliolo from the University of Urbino in Italy, who is coordinating the project.

The CROWD4ROADS project works through smartphones mounted in cars that can pick up changes in speed caused by bumps, holes or distributed roughness. This data can then be used by local authorities to know where they need to repair roads, which in turn makes their mobility sector more energy efficient.

‘Engaging drivers and passengers in monitoring roads can have a big impact on maintenance strategies and on environmental footprint,’ said Prof. Bogliolo.

To estimate the roughness of a road’s surface CROWD4ROADS makes use of SmartRoadSense, a platform that collects, aggregates and processes data from accelerometers, which are the smartphone sensors that measure movement.

‘The smoother the road surface the lower the emissions.’

CROWD4ROADS is also linked to BlaBlaCar, a carpooling platform that operates in 14 countries worldwide. Integration between crowdsensing and carpooling allows SmartRoadSense to detect the number of people in each car, with a view to increasing the number of passengers.

To do this, developers are implementing an incentive system that will reward users for more sustainable behaviour, such as sharing their trips, monitoring road roughness, or inviting others to do the same.

If they can recruit more people they will earn vouchers and discounts, which could help fill empty seats in cars and take some of these inefficient vehicles off our roads.

Currently, passenger cars account for 73.7 % of total intra-EU passenger transport, according to CROWD4ROADS, but the average car occupancy rate is well below two passengers per car.

The SocialCar project hopes to address this issue by taking carpooling one step further. The researchers are establishing a collective transport network that combines community-based services, such as carpooling, with other transport systems like metros, taxis, buses and shared bike schemes.

Users can log into the project’s mobile app and gain access to a single platform to plan, book and pay for multimodal and multi-service trips. Their aim is to reduce travel times and costs, while improving the environmental performance of urban transport networks.

The app also provides the urban transport sector with new data streams that can help refine these networks even further.

Fabio Cartolano, Innovation Manager at FIT Consulting, which is leading the EU-funded project, says data will be a driving force in changing the environmental performance of the mobility sphere.

‘As a sector, mobility has been less reactive (to data) than for example the tourist sector with Airbnb or flight booking platforms. Mobility has been a bit behind but we see the business changing,’ he said.

The project is in the final stages of testing its RideMyRoute app. Once it is ready, users will be able to carpool within cities, between their homes and the closest public transport stop, rather than only to other cities, which is the case with BlaBlaCar.

This will help fill empty seats in vehicles across cities, and ultimately take some cars off our roads. But there are still other transport areas that run at an inefficient capacity.

Over the last few years most sharing apps have focused on passenger cars and taxis, but BusUp, a Spanish start-up, allows for on-demand bus-sharing solutions for group travel – if there is enough demand.

Private coach hire can be booked through BusUp’s app in real-time, and trip organisers are able to share the costs among passengers, catering to those needing a private coach, but not wanting to take on the financial risk of hiring a bus.

With this solution, the Barcelona-based start-up hopes to become a more sustainable transport alternative for those needing to attend an event or to commute to work in areas where public transport is limited and a car is the only real alternative, Eva Romagosa, BusUp’s co-founder and chief innovation officer, says.

The company is also focusing on partnering with public bodies in metropolitan areas and organisers of big events, such as football matches and music festivals.

‘It’s about solving the need of a large group of people who want to go to the same place at same time for whatever reason – this will always be more sustainable and cheaper and better solve the need for accessibility,’ said Romagosa.