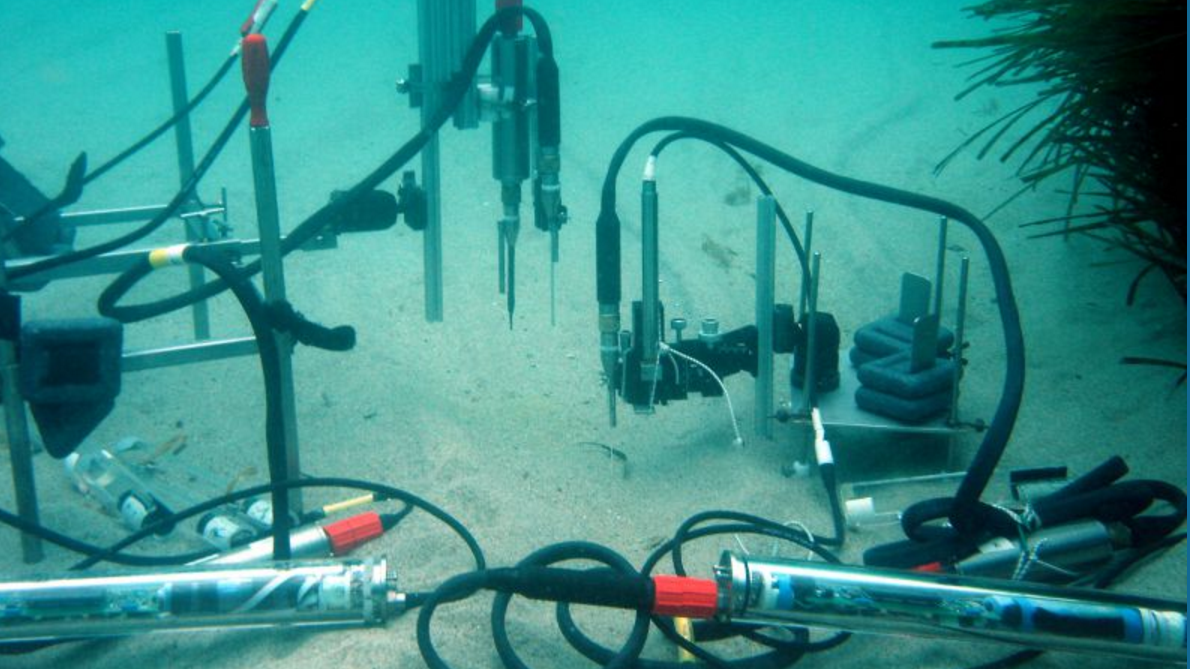 State-of-the-art sensors measure the amount of CO2 leaked from the ocean floor in the Mediterranean Sea, and similar ones are being used in the North Sea. Image credit: M.Weber/HYDRA

Scientists are preparing a first-of-a-kind sub-sea experiment in which they will deliberately pump carbon dioxide into the ocean floor and let it seep back up into the sea.

Out in the choppy waters of the North Sea, 100 km from the Scottish coast, they will inject a tonne of CO2 into the sediment. Patrolling the ocean floor will be a suite of state-of-the-art sensors, watching, listening and identifying the gas. The question they want to answer is this: if CO2 ever escaped from undersea storage, would we be able to detect it?

According to the International Energy Agency, around a third of all CO2 emissions come from fossil fuels used for generating electricity. It believes these emissions could be substantially reduced using carbon capture and storage (CCS) – where CO2 is pumped into deep aquifers or empty oil and gas reservoirs.

However, such a drastic solution to climate change alarms some, partly due to fears we might be leaving our descendants a dangerous legacy.

‘The risky bit is the first few hundred years,’ said Professor Klaus Wallmann of the GEOMAR Helmholtz Centre for Ocean Research Kiel in Germany and coordinator of the ECO2 project which looked at the risk of leaks from underground storage reservoirs.

The CO2 will be safe in the very long term because, as the millennia unfold, it will dissolve, creating a liquid too high in density to migrate upwards.

But in the shorter term there is a risk that the CO2 will escape through some undetected geological structure – such as a chimney or pipe structure.

Carbon capture and storage (CCS), where carbon dioxide is captured before it hits the atmosphere and stored underground, is a key tool in meeting the EU’s targets to reduce carbon emissions by 40 % from 1990 levels by 2030.

It is thought that it could be particularly effective in countries which rely heavily on fossil fuels and have a fast-growing demand for energy.

The EU has set out a legal framework for the safe geological storage of CO2 and researchers are continuing to investigate the effectiveness and practicalities of the technology in a number of EU-funded projects.

To explore this, the project studied seepage of methane, which behaves like CO2, from natural repositories and drilled wells.

What they found was that because of the distances, pressures and temperatures involved, the rate at which the methane emerges turns out to be between one and ten tonnes a year.

A typical CCS facility might sequester a million tonnes of CO2 a year.

At another EU-funded project, PANACEA, researchers modelled the flow of CO2 in natural and artificial repositories.

‘What we have learned is that, if there is leakage from the reservoir, it will not be substantial in most cases,’ said coordinator Dr Jacob Bensabat of Environmental and Water Resources Engineering, in Haifa, Israel.

‘Model investigations have indicated that, when it occurs, CO2 leakage is relatively limited in quantities. As it migrates upwards from the reservoir the CO2 becomes gaseous and thus is more mobile but the quantities are small.’

The sea urchin crawling along the sea floor, however, might not be so sanguine about belches of carbon dioxide acidifying its environment, threatening to dissolve its calcareous plates and releasing toxins from nearby rocks. Many can adapt briefly to increased acidity but a long-term change would be a different matter.

In the North Sea, however, ECO2 has shown that sea creatures are well protected – from both acidity and also from excessively salty water the CO2 might push before it – by ocean currents that rinse the environment at millions of tonnes a second.

Nevertheless, detecting releases is crucial. New European legislation dictates that storage sites be monitored for at least 20 years after injection ceases. Aside from safety, there is the issue of carbon trading: a company must be able to quantify how much carbon it has sequestered and how much has leaked away.

Professor Douglas Connelly, of the National Oceanography Centre in Southampton, UK, runs the STEMM-CCS project, which is conducting the North Sea experiment. The project, which is coordinated by the UK's Natural Environment Research Council, is deploying hydroacoustic sensors that can ‘hear’ bubbles of gas trickling from the deep – and can even distinguish between them and those lurking in a fish bladder. Chemical sensors can tell whether a surge of carbon dioxide has come from a biological or inorganic source.

But Prof. Connelly says there are gaps. ‘Unless there’s a very large blowout it could be very difficult to detect a release.’

One reason is that CO2 emerges from the sediment as a gas but swiftly dissolves in the sea water: the hunt is for tell-tale droplets of liquid in the ‘inherent vastness of the ocean’, as Connelly’s research team puts it.

Another problem is financial: today’s sensors must often be deployed or managed from ships that cost around EUR 30 000 a day to operate.

STEMM-CCS’s experiment on the floor of the North Sea will be a first, testing a raft of new sensors honed to spot the dissolved CO2, to work autonomously, and to tough it out in the turbulent realities of the ocean.

The team has developed a so-called optode, which picks up acidity changes by optically measuring the responses of a dye. A lab-on-a-chip will detect a range of chemicals.

Add to this a new control system and devices to check on background factors such as temperature and pressure, and the result is a platform that might look well in a playground. Bright orange circular bars enclose a cluster of yellow, spherical pods, each of which can be released on demand to float the latest data up to the surface, whence it is beamed home.

After years of preparation, a research ship will depart in 2019 for a mooring above a depleted gas field in the North Sea to simulate emission from a storage site.

It will release a seabed lander packed with cylinders of carbon dioxide gas which will drift down 120 metres to the floor. The CO2 will then be pumped along a drilled well and emerge several metres below. Sensors, packed into small landers and bullet-like autonomous submarines, will click into action.

The trip is unique, says Prof. Connelly, because it takes place in real sediments in the North Sea, subject to the whims of the ocean, and above a genuine potential CCS site.

‘We’re going to try to find out what would happen in the real world,’ he said.