Say goodbye to knobs and buttons 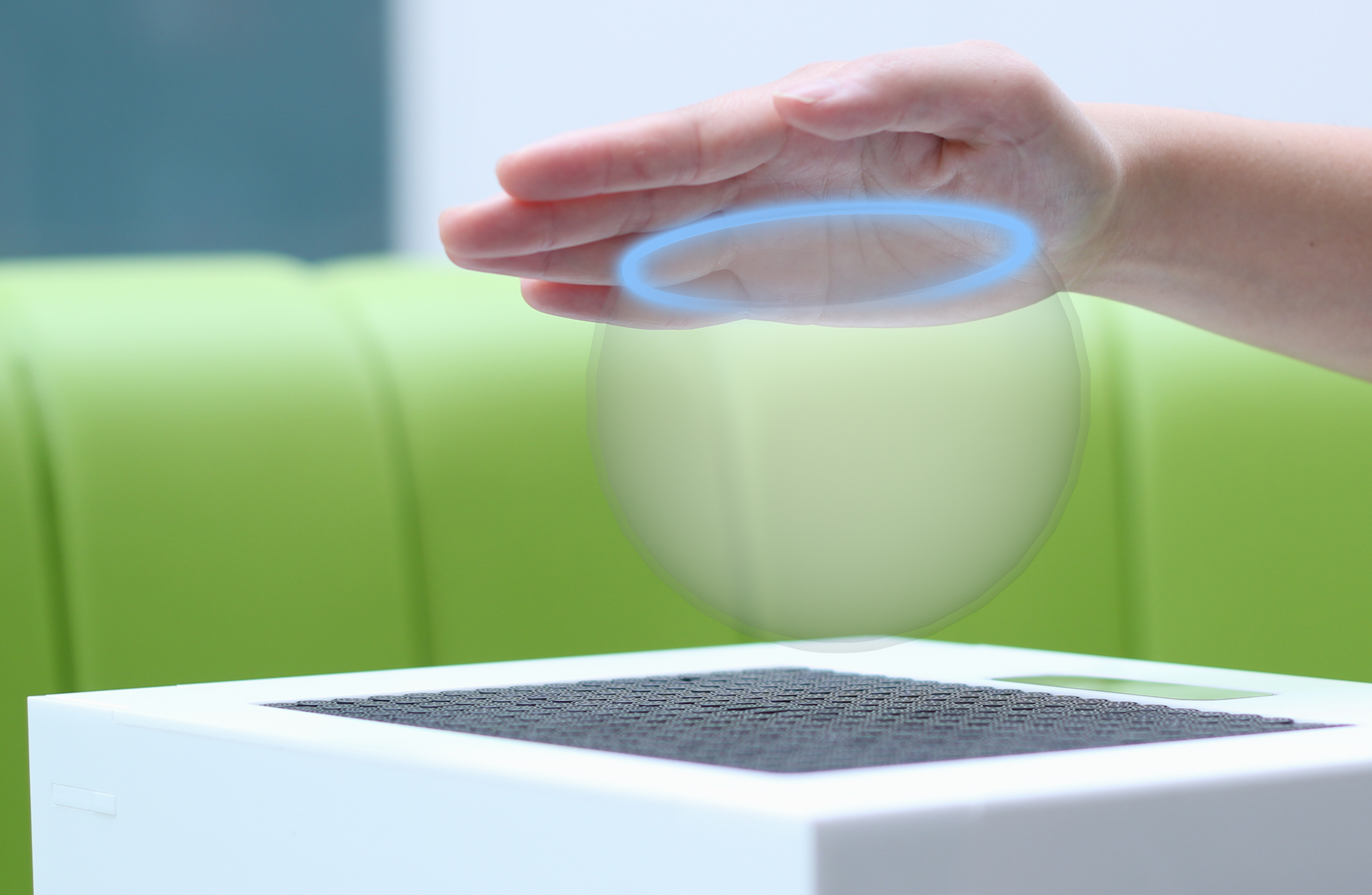 Forcefields emit frequencies that are too high for us to hear but powerful enough for us to feel. Image courtesy of Ultrahaptics

If you’ve ever stood close to a bass speaker in a nightclub, you know what it’s like to feel sound.

A UK-based start-up is rolling out technology that uses this principle to let you feel and manipulate shapes in mid-air, and it’s going to change the way you interact with your car, your home and even how you play computer games.

‘We’re not here to abolish all keyboards and all touch-based interfaces and get rid of all buttons,’ said Tom Carter, the 26-year-old co-founder of start-up Ultrahaptics. However, he believes that devices that can read hand movements and give feedback in mid-air using ultrasound will become an integral part of our daily lives.

‘You stop having to learn how to use every single different device and you start being able to just know instinctively how to use them,’ he said.

One early device using the technology could be an alarm clock which senses gestures and gives feedback to show that you have snoozed it or turned off the alarm. It could also make a difference in our kitchens, where people often have dirty hands and would want to be able to interact with appliances without having to touch them.

The technology was made possible due to the accuracy of modern motion-sensing technology such as Microsoft Kinect, combined with the computing power to manipulate ultrasound speakers in clever ways.

The difference is that with motion-sensing technology alone, you don’t know if your gesture has achieved the desired result without looking, whereas the haptic feedback device can let you feel something at the same time.

It works using often tens or hundreds of small speakers which operate at 40 000 hertz, too high a frequency for us to hear. Human hearing typically ranges from 20 hertz to
20 000 hertz.

Blowing through a straw

Our hands can’t feel sounds in the 40 000 hertz frequency, so what the team did was turn them on and off to create a second vibration at between 1 to 500 hertz – and that makes your skin move at speeds you can feel, giving you a sense of pressure a bit like someone blowing through a straw onto your skin.

‘What we needed to do was to figure out how to turn them on and off, and in what time delay so that you create the tactile sensations you want,’ said Professor Sriram Subramanian, from University of Sussex, who set the Ultrahaptics company up with Tom Carter and a third researcher, Dr Ben Long.

‘You stop having to learn how to use every single different device.’

The downside is that 1 to 500 hertz is within human hearing range, meaning the technology gave off an annoying buzz. Prof. Subramanian led the DHaptics project, funded by the EU's European Research Council, to find a way to turn the volume down on that noise, and he’s been successful.

Now that the technology is market-ready, Carter at Ultrahaptics travels all over the world speaking to big manufacturers about how they could add the technology to car dashboards, domestic appliances and consumer electronics devices in a way that is tailored to their brand identity.

In fact Ultrahaptics, which spun out of a university about a year and a half ago, is so busy dealing with carmakers and appliance companies that they’re having to turn people away.

However, the fact that they are busy doesn’t mean smaller manufacturers can’t also get in on the act. Ultrahaptics plan to package the technology into a chip and software combination that means people can start developing their own ultrasound-based haptic devices.

That development was only possible thanks to the EU’s specialised funding for small, highly innovative firms under Horizon 2020, the EU’s research funding scheme, as part of the UTOUCH project.

‘We’ve got a growth period coming now because of this Horizon 2020 programme,’ said Carter. ‘That’s really unlocked a really big project that wasn’t going to be possible.’

The chip and software package means the company will be able to get more products onto the market as it only requires one Ultrahaptics staff member to work with companies to help them develop a device.

In fact, they expect the first might be on sale in time for Christmas 2016.

The next step is to work on ways to refine the technology, and Carter believes the real excitement lies within virtual reality, with an ultrasound-based haptics device being used alongside a virtual reality headset such as Oculus Rift.

‘With computer games, the thing I’m personally most excited about is virtual reality,’ he said. ‘If you can go into a virtual world, be able to reach out and feel and touch things that are in the virtual world but obviously aren’t really there in the real world, I think that would be a really exciting experience.’

Under the Horizon 2020 research funding programme, the EU can support high-tech small- and medium-sized enterprises (SMEs).

Around EUR 3 billion in funds has been earmarked for SMEs which are based in the EU or associated countries.

The funding is designed to help support the development of innovative products or services which are close to market.