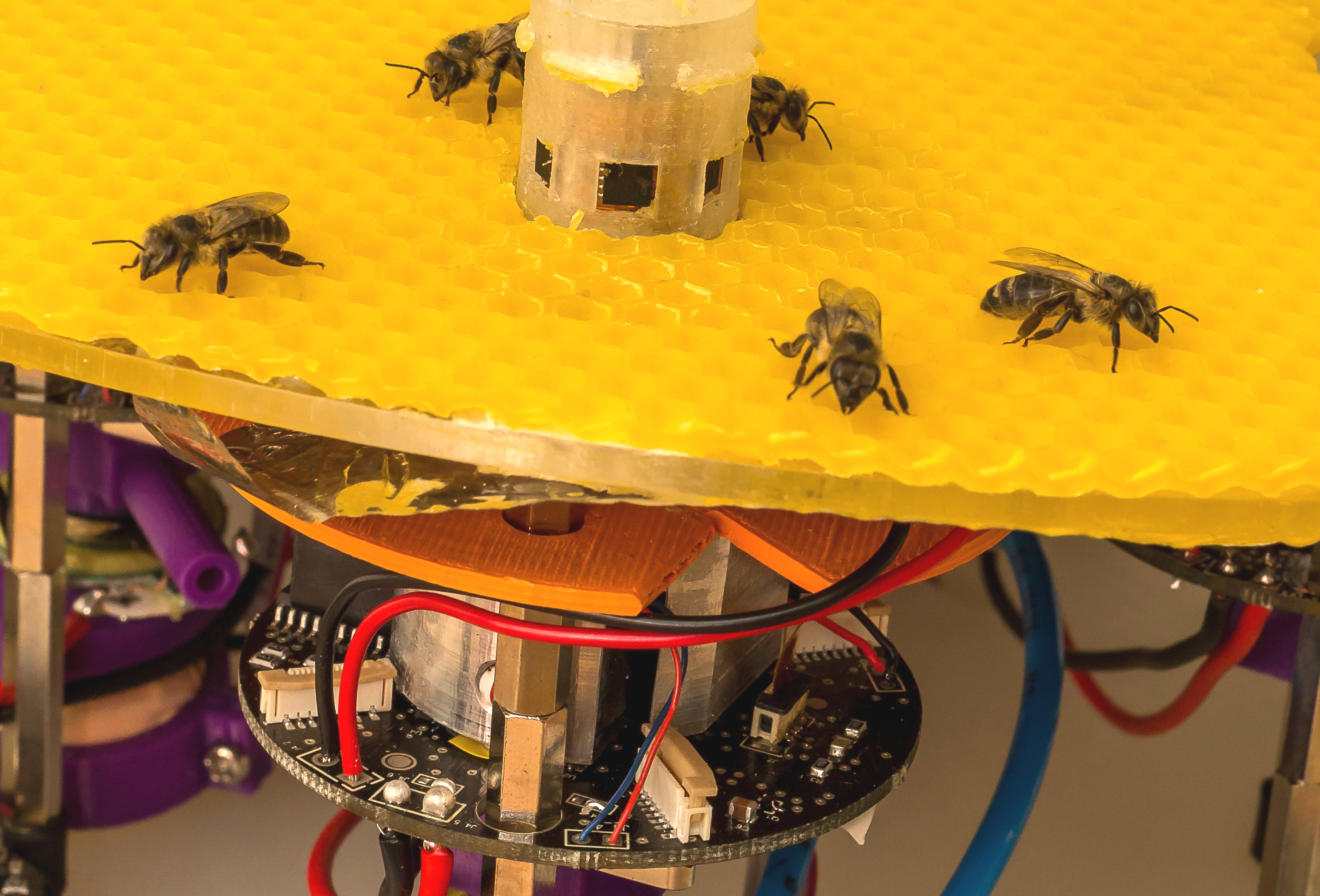 Researchers are studying bees to make robotic versions that can help beekeepers look after their hives. Image courtesy of ASSISIbf

By mimicking the ways that queen bees vibrate, scientists have created robots that can fool bees into accepting them as members of the hive, and the results are giving beekeepers new insight into population behaviour.

It’s part of a series of projects where researchers are building robots that mimic evolutionary traits of animals in order to interact with the world in a more efficient way.

‘What we had in a mind was a set of machines that were capable of interacting with bees,’ said Dr Thomas Schmickl of the Artificial Life Laboratory in Graz, Austria. He coordinates ASSISIbf, an EU-funded project to design robots that integrate with animal societies for environmental and agricultural monitoring.

‘We want our robots to be accepted by bees so they are treated like real members of the society.’

The project has a bio-hybrid hive where static robot bees exist side-by-side with their living counterparts, so far for periods of around two to three hours. The idea is to paint a picture of what is going on inside the hive and then use the robots to influence the bees’ behaviour.

‘You soon notice that a dialogue emerges,’ said Dr Schmickl.

The robots can artificially recreate several stimuli such as airflow from fanning wings and temperature, which can be both appealing and repelling for the living bees. They can also vibrate and mimic the queen bee, which speeds or stops the living organisms.

Sensors on the living bees also feed into an ‘evolutionary algorithm’ which learns how to map their behaviour and allows the robotic bees to better interact with the insects.

‘With just a few (robot) bees we can detect abnormities, something that was different the days before,’ said Dr Schmickl. ‘You can retrieve information about the whole situation of the population: is it dense, is it moving or not? Then you have an environmental sensing capability.’

This can help beekeepers look after their hives better, in particular, reducing the need to open them for inspection which can cause stress to all the bees and even kill hundreds of them each time.

‘We want our robots to be accepted by bees so they are treated like real members of the society.’

‘In the beginning it’s just a beehive, but in the long run, the more sophisticated this gets, you could be talking to the whole population of a forest,’ said Dr Schmickl. ‘We want to get control over the animal community by establishing a fair dialogue between the animals and the machines.’

Agriculture is not the only industry that could benefit from bio-inspired robots: ocean energy could also use the evolutionary traits of squid and octopus.

‘Ocean renewable energy technologies, such as offshore wind farms or wave energy harvesting devices, are designed to produce energy from stretches of sea where winds are stronger and waves are higher, but while extreme weather conditions increase the productivity it also increases the costs of maintenance of these structures,’ said Dr Francesco Giorgio-Serchi from the University of Southampton, UK.

Currently, maintaining these huge structures requires taking them out of the ocean, but a lot of time and money would be saved if you could access them underwater.

‘Squids and octopus are able to swim in a very efficient way,’ said Dr Giorgio-Serchi. ‘They can perform very impressive manoeuvres without having joints … so we tried to do the same thing.’

Dr Giorgio-Serchi ran the EU-funded CFD-Octoprop project, which designed an octopus-inspired robot with a rubber cavity instead of organic tissue and cables instead of muscles, which were pulled with a small electric motor.

‘By shortening the cables, the shell would shrink and expel the fluid inside, then simply because of the elastic nature of the rubber material, the shell would re-inflate, suck water in and the cycle would start again,’ he said.

This recreated an octopus’ propulsion which gives it a manoeuvrability that could see it act as a future deep sea repair robot, and that’s not all.

‘They could be used for disaster response and to check the wellbeing of the flooded parts of nuclear power plants,’ said Dr Giorgio-Serchi.

‘The shape-changing effect, which plays such a big part in the generation of thrust of these vehicles, could also have an impact on the design of new energy-generating devices for underwater energy harvesters.’

Mimicking the movement of an animal can open the door to a range of new technologies with previously unforeseen applications, say researchers.

‘(Bio-inspired) robots could help us build artificial limbs, exoskeletons or robotic companions,’ said Dr Helmut Hauser from the University of Bristol, UK and previously of the University of Zurich in Switerland. While in Zurich, Dr Hauser was project manager of Locomorph, an EU-funded project which developed animal-inspired movement in robots.

‘A lot of the control and processes are not happening in the brain, but in the body itself. The body is carrying out computational processes.’

‘We looked at ecological methodologies that were caused by natural selection and built different terrains in the lab, like slopes and stairs,’ said Dr Hauser. ‘Also a very important concept of the project was the idea of morphosis, i.e. changing the body to adapt to new tasks and different environment.’

For example, Locomorph looked at dogs, toddlers and apes as well as different types of salamanders, some that lived in the grass and others that lived in water.

‘They have very basic principles that can be found in humans, but we are much more complex. If we understand salamanders we can build upon those principles,’ said Dr Hauser.

The idea is to build robots whose movements are suited to different types of situations, such as search and rescue operations or working on a factory floor.

Locomorph developed a whole range of new control mechanics and robotic systems that implemented these underlying principles. Their results are available in a robot construction kit, called LocoKit, which allows other roboticists and researchers to build robots with legs and locomotive ability.

‘As these systems become more intelligent, sooner or later, I think we will have robotic companions working with us at home,’ said Dr Hauser.