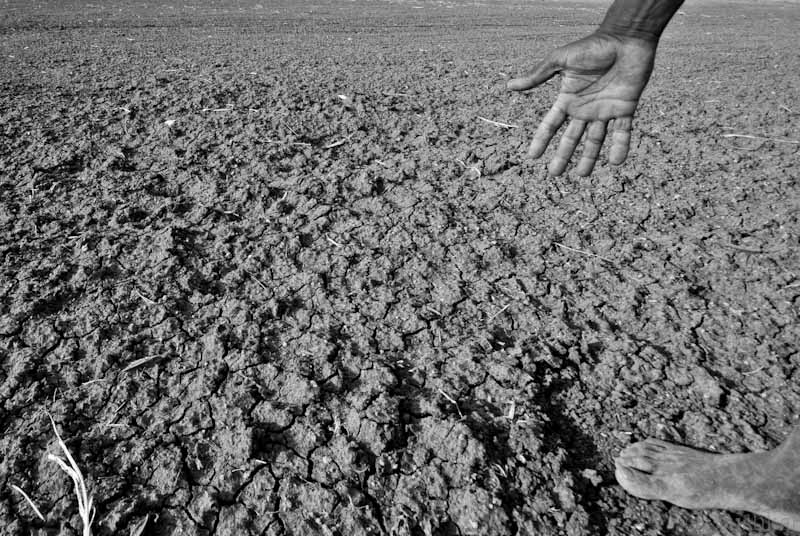 Common crops are under threat from water scarcity and drought in the developing world. Image credit — ‘Drought affected area in Karnataka, India, 2012’ by Pushkarv is licensed under CC BY-SA 3.0

A Europe-wide research effort is ramping up efforts to understand the risk to EU food supplies from climate change, after a report revealed that common staples are under threat from water scarcity and drought in the developing world.

The report, entitled Vulnerabilities of Europe’s economy to global water scarcity and drought revealed that supplies of animal feed, rice, cotton, grapes and even pistachios could be impacted in the near future as they come from regions that have a shortage of water.

In fact, over a third of Europe’s water needs come from other parts of the world, due to imported crops.

‘Right now it is more like an alert,’ said Professor Bart van den Hurk, who coordinates the EU-funded IMPREX project, which produced the report as part of its efforts to analyse the links between climate change and water.

‘Can you imagine the chocolate industry without cocoa.’

‘The next step is really to look at climate change sentinels (indicators) in the areas of exposure … and see whether you can actually translate climate change effects in those areas to European sensitivities,’ said Prof. van den Hurk, who works for The Royal Netherlands Meteorological Institute, the Dutch national weather service.

According to the UN’s Intergovernmental Panel on Climate Change, the frequency and intensity of heatwaves and droughts will rise over the coming years as man-made climate change takes hold.

Dr Ertug Ercin, the lead author of the report, said that they were surprised when they realised just how vulnerable some of Europe’s food products were.

‘Can you imagine the chocolate industry without cocoa,’ said Dr Ercin, from the Water Footprint Network, a Dutch non-governmental organisation which is part of the IMPREX project. ‘These (industries) are so vulnerable, and that is shocking.’

The project worked out Europe’s water vulnerability by looking at trade flows into and out of Europe, and then examining the water situation in countries from where the food originates.

Analysing water demand is part of a broader effort by the IMPREX project to encourage public officials and businesses to take climate change forecasts into account when making decisions by predicting how global warming will lead to extreme weather in Europe.

It’s in part driven by a personal commitment by Prof. van den Hurk to help people make better use of climate forecasts, where computer models can use satellite and ground measurements to extrapolate how climate change will affect us.

‘I’m really on a mission to embed this physical climate science further down the chain,’ he said.

World governments agreed in Paris in 2015 to keep global warming to within 2 degrees Celsius above pre-industrial times.

In order to stop too much carbon dioxide going into the atmosphere - which is the main cause of global warming - the EU has set three specific targets to acheive by 2020. The targets are a 20 % cut on greenhouse gas emissions compared with 1990 levels, for 20 % of energy to come from renewable sources, and for a 20 % improvement in energy efficiency.

One of the main ways of acheiving these targets is through innovation - finding ways to use less energy and to generate energy sustainably.