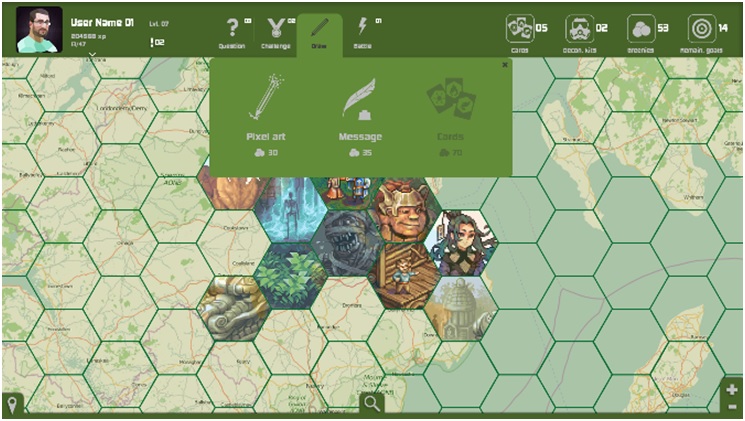 A game that shifts between the real and virtual worlds was designed to encourage people to use less energy. Image courtesy of GreenPlay

Competitive energy-saving between neighbours could encourage people to adopt environmentally friendly behaviour such as turning off lights or turning down the thermostat, thanks to a new game which turns people’s real-life actions into a virtual scoreboard.

It’s part of a new generation of serious games aimed at changing our behaviour around energy consumption.

Serious games are ones that draw on their entertainment value and element of competition to educate players about a particular issue, such as energy use.

The EU is funding research into the development of serious games, as well as apps and social media tools, as a way to help to improve people’s behaviour around energy efficiency across Europe.

In its Clean Energy for All Europeans legislative package, released on 30 November, the EU proposed adopting a binding target that Member States should improve their energy efficiency by 30 % compared to 1990 levels.

The GreenPlay consortium, coordinated by Professor Jeremy Legardeur at the ESTIA engineering institute in Biarritz, France, is working on an online platform called Apolis Planeta that shifts the boundary between the real and the virtual worlds.

This web-based achievements board challenges homeowners to outdo their peers in saving electricity. As an incentive to participate, victorious players can scribble messages and broadcast pixel art on an online map of earth.

What is unprecedented in this approach is that real estate on this virtual map can only be earned through good deeds in the real world. With EU funding, GreenPlay has equipped 200 homes in France and Spain with electricity sensors that report building electricity consumption in real time. This data allows GreenPlay partners to test players on energy-saving challenges in their daily lives.

According to Professor Miquel Casals at the Polytechnic University of Catalonia in Barcelona, Spain, over 15 % of the energy consumed in EU buildings today is wasted. This extravagance clashes with economic and sustainability objectives, but avoiding it is no trivial matter.

‘There is no single blunder that wastes all this energy. It is the result of piecemeal mistakes with lighting, heating and all kinds of appliances,’ said Prof. Casals. ‘The real challenge is teaching people to notice these habits and use their common sense.’

Along with a social housing provider and one of Europe’s leading electricity suppliers, Prof. Casals is developing a life-simulation game based on a similar mechanic. Players are invited to follow the advice of a virtual cat to reduce the energy wasted in their home. All savings in the real world are translated to in-game currency, providing immediate gratification for players and unlocking new features in the game.

'There is no single blunder that wastes all this energy.'

This Christmas, the EU-funded EnerGAware project that Prof. Casals coordinates will release the game as an app for their first 50 beta testers to try out. ‘The number of people playing with apps on their smart phone and tablet is exploding,’ said Prof. Casals. ‘Games offer a great opportunity to engage with people.’

Elsewhere, sensors are being used to enhance the realism of energy-saving games, with the hope that lessons learned while playing them will translate into real-life behaviour.

The EU-funded TRIBE project is programming an app that transforms public buildings into their digital counterparts. Its objective is to put real-world occupants of these buildings in the shoes of a virtual facility manager.

‘Players go through the levels by guiding in-game avatars to save more energy,’ said María Herrando at the CIRCE Foundation in Zaragoza, Spain, who works on TRIBE.

The project is fleshing out the virtual buildings in the game by installing electronic sensors in their real-world counterparts. Field measurements of power consumption, brightness, temperature and occupancy are being fed into the models, inviting players to find out for themselves which habits genuinely waste the most energy.

The project will be releasing the game this Christmas on the TRIBE website.

‘Hopefully, what players learn in the game will change how they act in real life,’ said Herrando. ‘The big question is whether we can make those changes stick.’