Voting by mail makes people think more about their own interests 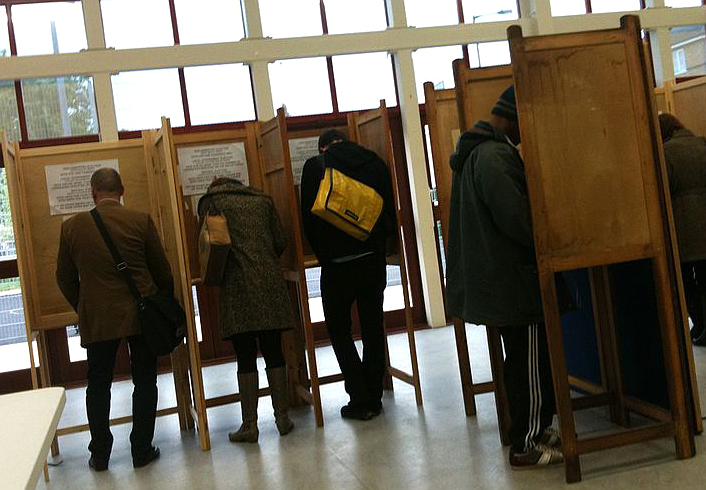 Voters at polling stations have a more positive experience, according to researchers. Image credit: ‘Voting in Hackney’ by Alex Lee is licensed under CC BY 2.0

Postal voting systems - where people vote from home prior to the election and return their ballot paper by mail - can discourage people from voting in the next election, according to recent European research which suggests that many strongly held ideas about voter behaviour during elections are plain wrong.

While voting from home has been introduced in some European countries to improve voter turnout and encourage young people to vote, it can also decrease our sense of collective responsibility and make people think more about their own interests. And assuming electronic voting machines are neutral is a mistake: they influence how we vote.

These are just some of the discoveries made in a research project, INMIVO, which was funded by the EU's European Research Council and used surveys, in-depth interviews and election diaries to understand what goes on in people's minds when they vote.

‘We find that when the voting age is lowered to 16, people are much more likely to vote in their first election, compared to two years later.’

‘Typically when authorities allow postal voting, they do so because they think it makes voting much easier,’ explained study leader Michael Bruter, professor of political science at the London School of Economics, UK.

In the UK, postal voting was adopted to increase voter turnout, but Prof. Bruter’s in-depth study of the 2015 British general election reveals that it’s a turn-off. And it impacts vote choice.

‘They feel a sense of responsibility and think of other people when voting,’ he explained. ‘While people who vote at home are more negative and are less likely to vote in the next election. They are also much more egocentric and think more about their own interests.’

Postal voters under 25 years old in the British general election in 2015 were twice as likely to vote for extreme right parties than those who voted in person, while those aged 25 to 39 were 50 % more likely to vote this way (above 40 years old, there was no effect).

Electronic voting also affected decisions, as people who used the traditional pen and paper took the vote more seriously, spending three times longer mulling their decision than if faced with buttons on a voting machine.

The study analysed the facial expressions and body language of voters at an experimental polling station. The result: voting is an emotional experience and even those cynical about politics are positive and happy when casting their vote.

This emotion matters in terms of young people because Prof. Bruter found that people who fail to vote in their first two elections are likely to become chronic avoiders of ballot papers.

‘They crave the experience of a first real election, what it feels like,’ he said. ‘It’s a question of doing it when young; if you do it then, you can make it a habit for life.’

And though officials worry about queues at polling stations, the study found voters never complain about them and enjoy the festive, communal experience that can arise.

Previous studies indicated a quarter of Americans had cried because of an election, illustrating the strength of emotion involved. This helps explain why statisticians get predictions wrong.

A voter might be very rational before the election, but during the final week, memories and emotions of past elections kick in and can change minds, Prof. Bruter explains. ‘You start voting with your heart,’ he said, with voters more likely to switch from extreme to moderate parties.

The study also found that between 20 % and 30 % of people make up their mind or change it in the week before they vote, half of these on the day itself.

‘During an Irish referendum on children’s rights, we found that nearly 80 % of people made their minds up in the last week,’ Prof. Bruter said. ‘At the last minute, you feel a sense of responsibility and it becomes an important predictor of how you behave, making you more reasonable.’

Such scientific research can shake us from assumptions about voters. For example, there is often a belief among politicians and the media that negative campaigning – attacking one’s opponent – works as a strategy. But there is no scientific evidence for this in Europe, says political scholar Dr Annemarie Walter at Nottingham University, UK, and findings from the US are mixed.

Initial findings from her CSNCC project, which is supported by the EU’s Marie Skłodowska-Curie Actions, suggest negative campaigning may not be an effective strategy in Europe, but it does have other effects.

‘What we found in the UK was that it did not affect turnout or voters’ satisfaction with the political system,’ she said, ‘but we did find an effect on their level of political trust.’

In the US, negative campaigning works when a voter becomes less likely to vote for their preferred candidate, be it a Republican or Democrat.

‘The difference with the US is that in European countries there are usually many parties to choose from and voters tend to consider more than one party as a viable vote option,’ Dr Walter explained.

Voters turned away from one party may just go elsewhere, not necessarily to the attacking party. ‘It seems that negative campaigning is less effective in multi-party systems,’ she said.

‘In true multi-party systems, like in the Netherlands, where they always have a coalition government, there is a more consensus (-based) culture and as a result voters tend to dislike and punish attack behaviour. Parties that wish to govern will also think twice about going negative, as they must work with parties after the election.’

The results of studies such as these could lead to innovations in the way we vote.

Professor Bruter is looking at how to increase voter turnout among first-time voters. ‘We could have dedicated polling stations, or we might include parties or elements to make it more welcoming, perhaps with selfie corners. Or you could ask parties to write separate leaflets or a manifesto specifically for first-time voters.’

He says lowering the voter age is also worthwhile. ‘We find that when the voting age is lowered to 16, people are much more likely to vote in their first election, compared to two years later. Between 18 and 25 is one of the worst periods to have your first election.’