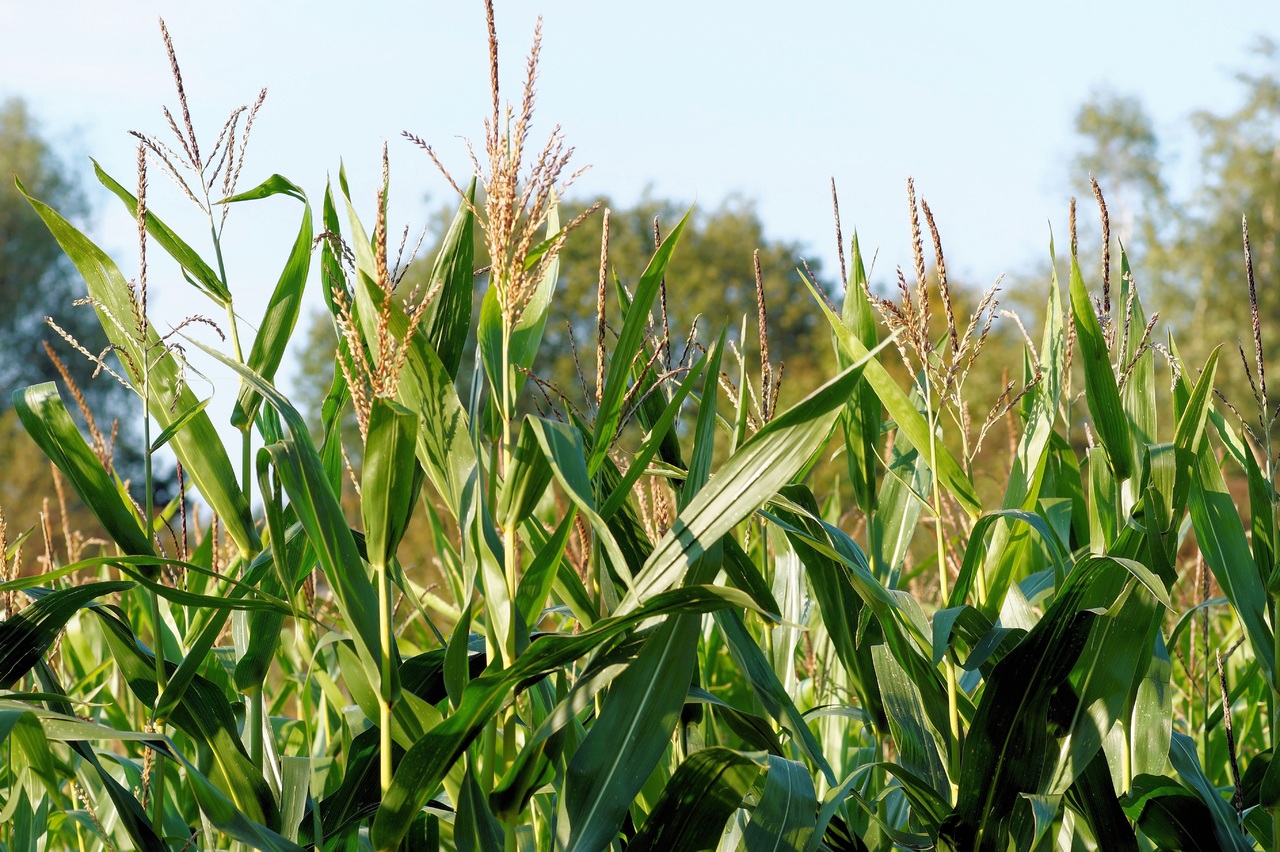 Caterpillar saliva causes maize to release a fragrant chemical that prepares other parts of the plant for attack. Image credit - Pxhere, licensed under CC0

Plants have nowhere to run from their enemies - flying, crawling and jumping insects want to eat them alive. But plants are not defenceless. They deploy chemical toxins to deter insects. These can make the plant taste bitter, inhibit the herbivore’s digestive enzymes, disrupt their metabolism or poison them.

But they have a more subtle defence too - perfumed chemical compounds, known as volatiles, that they emit into the air to warn neighbours of danger or convey when they’re hurt. An example is the smell of cut grass, a mix of molecules called ‘green leaf volatiles’ which are released when a plant is damaged.

‘Plants are nature’s chemists. They take a few simple inorganic molecules and produce thousands of different organic molecules by just adding (energy from) sunlight,’ said Professor Matthias Erb, a plant scientist at the University of Bern, Switzerland. He investigates the volatiles that plants emit when attacked by insects for a project called PERVOL.

‘Some of these volatiles attract natural enemies of the herbivore, so, friends of the plant,’ said Prof. Erb. For example, if a caterpillar attacks a plant, these volatiles may attract parasitoid wasps or trigger defence responses in neighbouring plants. He says plants don’t help one another by signaling ‘I’m under attack’. Rather, they snoop on one another’s chemical signals to warn themselves about imminent threats.

Decoding these signals could teach us how to better protect crops against insects, according to Prof. Erb.

Insects are responsible for destroying one-fifth of the world’s total crop production each year. This is predicted to rise further for grain crops with climate change, hitting the temperate zones hardest.

‘These (plant-derived) molecules can be useful for agriculture in that they are natural protective mechanisms of plants. We could use them instead of synthetic chemicals,’ he said.

Prof. Erb works with maize, a strong emitter of volatiles. One chemical it emits is indole, which has a pleasant flowery aroma in small concentrations. Indole is not released by cutting maize. It requires the presence of a molecule in moth caterpillar saliva that activates defence responses in the plant. ‘(Healthy) maize plants do not emit indole. It is only triggered by herbivory,’ he said.

Prof. Erb and his colleagues found that when indole wafts towards the part of the plant that is not under attack, it triggers what he calls a primed state. ‘(Indole) doesn’t induce a defence response, but it prepares the plant, so that when the plant is attacked by a herbivore, it will respond quicker and stronger,’ he said.

Doing this means it can fend off its attacker more effectively, he says.

One limitation of indole, however, is that it is also released by some flowers, such as jasmine and orange blossom. To prevent confusion, as a single volatile might be misleading, maize plants often tune into chemical mixtures to deduce attacks.

‘We have shown that indole and green leaf volatiles act synergistically to induce defences in an even stronger fashion than an individual volatile,’ said Prof. Erb.

To paint a fuller picture of plant behaviour, scientists are also exploring the impact of insect saliva on green leaf volatiles.

This is something that Dr Silke Allmann at the University of Amsterdam in the Netherlands has investigated in her work looking at how the green leaf volatiles of hurt plants is perceived by both plants and insects.

She experimented on tobacco plants by mechanically cutting them and applying water or the saliva of a tobacco hornworm caterpillar. The results surprised her: overall, the amount of green leaf volatiles did not change much, but the composition of the volatiles shifted dramatically. An enzyme in the caterpillar’s spit changed the compound, causing it to shift from a grassy to a sweet smell.

She then discovered that a shift to the sweet-smelling compound attracted big-eyed bugs, which are natural enemies of the hornworm caterpillar, to the tobacco plant. This seemed puzzling to Dr Allmann, as the caterpillar’s own enzyme helped alert its presence to its enemies.

However, the sweet smell also warned adult tobacco hawk moths that a tobacco plant had already been colonised by caterpillars and steered them towards those with fewer competitors and fewer predators.

Dr Allmann is now studying this compound further as part of a project called VOLARE, and exploring practical uses.

‘A big challenge with plant volatiles is finding applications in agriculture. That is the holy grail,’ said Dr Allmann.

These chemicals can help farmers in a greener way, say the scientists.

‘You could imagine applying plant volatiles at the right moment to trigger specific reactions in a plant, for instance, resistance to herbivory,’ said Prof. ‘That would be a far more environmentally friendly strategy of boosting plant immunity or resistance to stress than applying a bioactive chemical to kill insects.’

Such natural chemicals could be released into fields under threat from pests to activate plant defences at the right moment. Insights into how plants detect warning smells could also allow breeders to develop crop varieties that are responsive to the signals.

What remains puzzling for scientists is how plants sniff out volatiles in the first place. They don’t have noses like us but can smell.

‘Our hypothesis is that volatiles enter through the stomata, small pores in leaves. We expect that there are sensors inside the leaf, perhaps proteins on the surface of cells, that the volatiles bind to,’ said Prof. Erb.

Dr Allmann is also hunting for these sensors. ‘If we found these receptors, we could find ligands (a type of molecule) that bind to them and switch them on. We could perhaps breed plants to be more or less sensitive to volatiles,’ she said. Plants could be bred that are easily triggered and could serve as sentinels to warn other plants nearby.

The research in this article has been funded by the EU's European Research Council.