In a picture: ‘Not enough people are aware of this monster’ 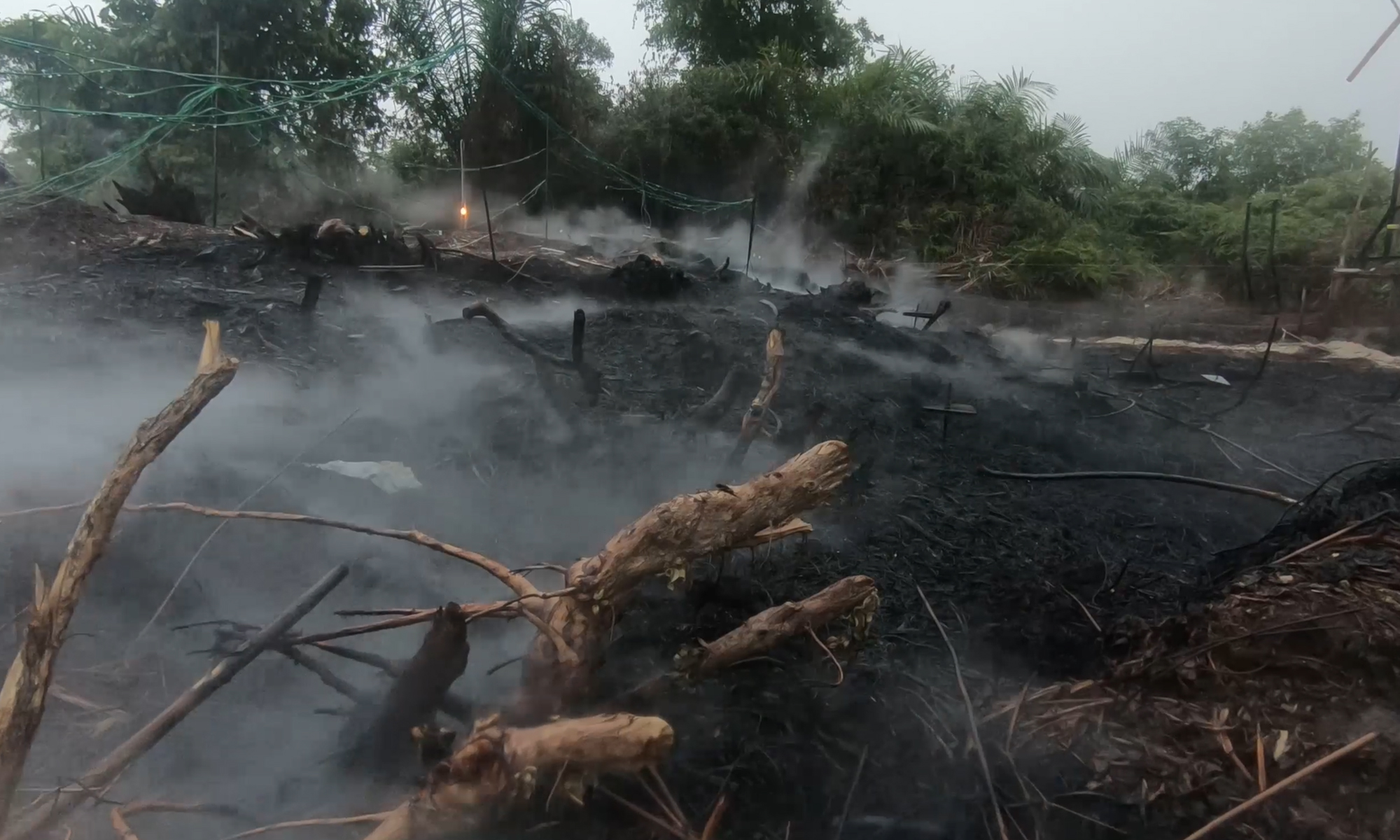 Professor Guillermo Rein, a fire scientist, tells Horizon why smouldering peatland fires are so dangerous and why we know so little about them.

We scientists are (just) starting to learn about this type of fire - smouldering fires.

Humans are tantalised by the image of flames. But the fires that we are discussing don't have a flame. They produce an incredible amount of smoke, they might glow at night, and they are consuming the soil.

They are megafires because of the amount of fuel, or carbon, that they burn. They are not the fastest or scariest, nor the most powerful. But they are the ones that, when we count how much fuel has burned, are about 100 times bigger than the ‘flaming’ fires in the news.

When smouldering fires burn, they are very difficult to suppress, and they become the largest fires on Earth. They can burn for weeks and for months.

(With the HAZE project) we are trying to understand how peat fires ignite, spread, and emit to enable new technologies for prevention, detection, protection and suppression.

What you see (in the video) is our field experiment (from August 2018 in South Sumatra, Indonesia). We’re imitating a slash and burn (procedure), which is often claimed to be the ignition source of peat fires. We placed a pile (of cut surface vegetation on top of the peaty soil), and then ignited it.

We did (the experiment) in Indonesia because the biggest fires are happening there and the true field conditions of interest to most people are the ones in Indonesia.

Our flames ignited the peat and then for the next three weeks the soil burned, making a hole very slowly and spreading laterally as well. Thermocouples measured temperature (of between 400°C and 600°C) in the soil. We had infrared cameras and spectroscopy measuring gas emissions. We were monitoring what the fire was doing day and night.

This was the first peat fire field experiment ever. It was crazy. We dug a trench all around the plot down to the mineral layer and filled it with sand. We created a firebreak. And we were next to a pond to supply water to pumps and hoses.

We had three big tropical storms. The site was flooded but the fire continued.

We saw that the fire spread faster vertically (downwards) than laterally. We were unprepared to explain that. We were assuming that it was going to be like in the lab. Now we know it is because the mineral content of the peat was quite high.

We saw that at night it actually moves away from the surface. It goes a little bit deeper, becomes weaker. Then as the sun starts to appear, the fire starts to come up. It was synchronised.

Obviously, suppression was part of the experiment. We learnt from the Manchester fire brigade. When they have a peat (fire) they have what is called a lance. You punch it into the soil and put the hose in one end. It has holes so distributes the water in depth instead of on the surface. The fire took three days to suppress (with lances).

Smouldering fires don't produce hot smoke that goes up into the atmosphere. (The smoke) attaches to the ground. It is an absolutely humongous cloud – haze.

Haze is about 13 times more toxic than the normal air in cities of Southeast Asia. The smoke is concentrated in particles of different sizes and the smallest, measured as PM2.5, are the worst because they can go into our lungs and bloodstream and then cause all kinds of issues, respiratory, cardiac and so forth.

(Haze also affects) visibility. Airports, roads and shipping lanes have to operate like they would at night. In Southeast Asia, this has severe consequences for the economy. This haze stays for several weeks. In the middle of the day, people cannot see more than four metres ahead.

You also have it in Artic fires like Siberia and Alaska. This year there were smouldering fires in Greenland.

No one is keeping track of all the peat fires that are happening around the world, not in detail at least, because satellites cannot see them.

Currently, we cannot detect smouldering fires because people are trying to detect them as if they were flaming fires. The chemistry, the heat and fire behaviour are drastically different.

The way we typically detect smouldering – it’s way too late. It is already when the fire is massive.

Our research is going to enable technology breakthroughs, for example, being able to detect these fires ahead of time using infrared signatures and gas signatures. We are developing the evidence that will allow the experts to retune satellites to be sensitive to the (infrared) signature.

We will also enable suppression technology, because air tankers (for aerial firefighting) do absolutely nothing to peat fires. Throwing (water from) an air tanker, as it happens with some frequency in Indonesia, on a peat fire is an official waste of money.

Peat is the richest soil (in terms of) carbon content. And it is a way for nature to store carbon. After several hundred, millions of years it becomes coal, oil and gas. It's like a very young pre-fossil (fuel) material.

Peatlands are not supposed to burn because they are places with a lot of water, like the tropical belt, or are very cold - the boreal belt.

But when peat becomes dry because of accidental, natural or industrial reasons, it goes from almost zero flammability to extreme flammability.

‘The way we typically detect smouldering – it’s way too late. It is already when the fire is massive.’

And this footprint is not accounted for because it cannot be measured to date. When you talk about the IPCC and carbon budgets and carbon calculators, they do not take into account peat fires.

There is a positive feedback loop between smouldering peat fires and climate change. If there is an excess of carbon emissions in the atmosphere, that leads to drier and hotter soil. Then based on our research, the probability of ignition and the fire size will increase. It's a self-accelerating mechanism.

A fire in California is a disaster, but if we regrow that same forest within 10 years then that fire was carbon neutral. That means what was emitted has been recaptured with this forest regrowth, but with peat - you do not have that option.

Guillermo Rein is a professor of fire science at the Department of Mechanical Engineering of Imperial College London, UK and leads the research group Imperial Hazelab. He also leads a project called HAZE, which is funded by the European Research Council.

As told to Annette Ekin. This account has been edited and condensed. If you liked this article, please consider sharing it on social media.