In a picture: Filming the immune system in action – Prof. Georg Fantner 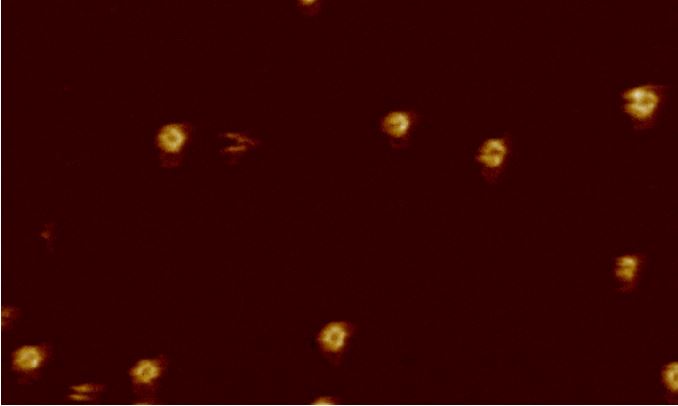 This video shows the body's immune system attacking a bacterial membrane. It punches one hole in the surface before pausing and then punching more. Video source - nature communications ( DOI https://doi.org/10.1038/s41467-019-10058-7)

By assembling a camera that can record video at nanometre resolution, scientists have filmed how the immune system kills bacteria by poking holes into it. Professor Georg Fantner tells us about how this was achieved and why his next challenge is to build a video camera that can film the inside of a living cell.

We want to watch what is going on at the nanoscale inside living cells, which has never been done. You can’t use a normal optical microscope to do this because photons (or the wavelength of light) are too big: in essence, we are blind. So instead of trying to see something with light, we try to feel the surface – like a blind person using a stick.

This movie (above) shows what is state of the art (in terms of videoing) outside the cell. Atomic force microscopy has, for the last 30 years, been a really good camera. It can take very high-resolution pictures of atoms and molecules. But we have been trying to make it into a very high-resolution video camera so we can observe processes as they are happening. We have been working for years now on making this atomic force microscope faster. It used to take several minutes to make each image and now it takes less than a second.

We have done this by speeding up every component to remove all the bottlenecks, pushing the limits of microfabrication and control engineering – making the points of the needles even finer for example.

'One thing we would particularly like to understand is how cells let things in.'

This video is of a bacterial membrane that was reconstituted on a surface. In the video, which was shot in the lab of Bart Hoogenboom at University College London (UK), a part of the body’s immune system – a group of proteins known as the membrane attack complex (MAC) – attacks that recreated surface. One protein inserts itself into the membrane and then there is a pause, which may provide enough time for a signal to be sent in the event that the MAC has attacked a human cell by mistake.

Then you can see 17 more proteins falling into place, punching a hole just 11 nanometres in diameter (1/10,000th of the width of a human hair) in the bacterial membrane. By making many holes, the MAC weakens the bacterium.

There was nothing living in that video – it was just molecules that have been extracted from a (bacteria) cell. We have also previously filmed peptide antibiotics (which work by disrupting the cell membranes of microbes) coming in and attacking live bacteria and killing them.

The InCell project (to build a camera that can enter a living cell) is trying to bring that same kind of visibility, but to the inside of living cells. It’s really the next frontier. We’ve worked for a decade or so to make those images fast outside of the cell: now we want to be able also to look from the inside.

The problem is that in order to make the images we need to touch the surfaces inside the cell. If you poke through the cell wall, you break the membrane and kill it.

Our purpose is to bring the microscope into the cell without killing it. We have had to make a very special type of needle that has a little band aid built into it to stop the cell membrane breaking when you puncture it.

So far, we’ve built a lot of the technology that’s going to be necessary to eventually go into the cell but we are still operating outside of it. The most difficult aspect is that it really spans so many different domains – mechanical engineering, nanotechnology, really advanced micro-nano-fabrication and genetic engineering.

We need new electrical instruments and a good understanding of genetic engineering to make cells express what we want to see on the inside of the cell. Gathering the experts from different areas has been the most challenging part because there’s not one person that knows all of this.

What I’m trying to establish in my lab is an environment with all these different capabilities. People in my lab will do molecular cloning one day, and (the) next day machining of metal. By the time graduate students come out of my lab they are specialised in one thing, but they have done it all.

One thing we would particularly like to understand is how cells let things in.

Cells are a living entity, they are eating and drinking. They let things in by a method called endocytosis which is like pinching off a piece of balloon (from the inside). The little volumes it takes up are very small. We think we know which molecules are at play here but we are not sure. There is a lot we don’t know.

The key thing is to make a technique that can take multiple measurements without killing the cell. If it takes 30 seconds for a cell to take up nutrients, then we need to be able to take images in less than a second – the needle must sweep the surfaces (a least) once a second.

Our work is providing a fundamental tool, rather than aiming to tackle any particular disease. What it might lead to is a very difficult question (because there are so many possibilities). The processes we want to watch are very fundamental to cell biology and if something goes wrong with any of them many things can happen – apoptosis (cell death) or cancer, for example.

This is a new way of looking at those processes. There’s no telling what we’ll find.

Prof. Georg Fantner is head of the laboratory for bio- and nano-instrumentation at the École Polytechnique Fédérale de Lausanne in Switzerland. He leads a project called InCell, funded by the EU’s European Research Council.

As told to Aisling Irwin. This account has been edited and condensed.