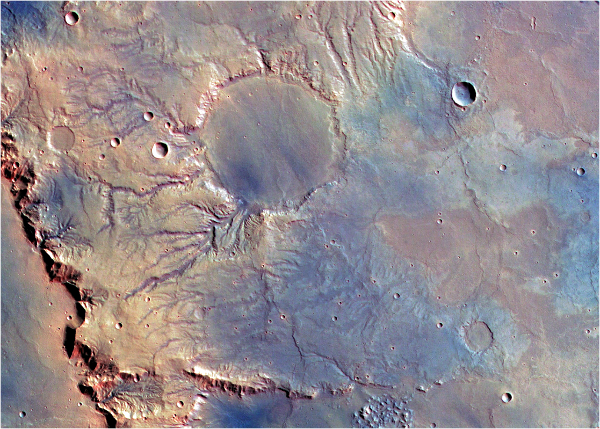 A virtual Mars could help researchers understand more about the planet’s valleys and water. Image courtesy of CROSSDRIVE

Dozens of spacecraft have visited Mars over the years, generating untold amounts of data and expertise. Now scientists are bringing all of this together, with a hope of painting a new picture of the red planet.

The work could answer enduring questions about Mars, such as why there is methane but no obvious life, given that on earth most methane is produced by living organisms, and how its water cycle could work.

It could also lead to a virtual recreation of Mars in earth laboratories, enabling scientists to visualise what they are studying and plan future missions.

‘We are pushing the limits of the science that can be done with [Mars] data,’ said astrophysicist Dr Miguel Ángel López-Valverde at the Institute of Astrophysics of Andalusia (CSIC) in Granada, Spain.

The data from space missions undergoes dedicated analysis when it is taken. After that it is, in principle, freely available for independent study, but often it is left unused.

That is a shame, said Dr López-Valverde, as old data could contain many hidden gems. He is leading a project by the EU called UPWARDS to collate existing Mars data – particularly that taken by the European Space Agency’s (ESA’s) ongoing Mars Express mission – and develop new tools for a thorough re-analysis.

One area the UPWARDS scientists want to investigate is the structure of the Martian upper atmosphere, an understanding of which is important for landing modules. To do so they are combining existing data from three Mars Express instruments and, for the first time, processing it in a state-of-the-art climate model.

That is just one element of the UPWARDS project, and Dr López-Valverde hopes that once many elements are put together a new ‘global’ picture of Mars will emerge. But it won’t be easy, as nearly 30 scientists working on individual elements will produce results that affect each other, potentially leading to delays and unexpected outcomes.

One of the reasons data from past missions gathers dust is that independent scientists don’t have the tools to read it properly, or are too dispersed to study it collaboratively. Another EU-backed project, CROSS DRIVE, attempts to solve this by creating a virtual Mars where everything understood about the planet can be displayed in novel ways.

‘With stereo glasses and head tracking, one can move around mountains, dive into craters, or fly through huge canyons,’ said computer scientist and project coordinator Dr Andreas Gerndt at the German Aerospace Centre in Braunschweig. ‘Everything is virtual but feels real.’

The benefit of the virtual Mars goes beyond having data that is easily accessible and in one place. Certain data that is hard to visualise – wind patterns, for instance – can be made visible in the simulation, allowing a scientist to figure out how they interact with other planetary systems.

‘I like to show scientific phenomena in a way that scientists have never seen before.’

Indeed, more than one scientist can log in to the virtual world at once, so that they can, as avatars, discuss what is happening around them. They can even rewind the clock to see what the Martian rover was doing when it collected the data.

Dr Gerndt hopes that when the ESA’s next Mars mission, ExoMars, touches the ground, it too will appear virtually in the simulation.

Of course, not everyone has access to virtual reality goggles and body sensors. For that reason, Dr Gerndt and others are making sure that the Mars data can still be visualised – albeit less immersively – in a desktop application, or even a standard web browser.

‘I like to show scientific phenomena in a way that scientists and engineers have never seen before,’ said Dr Gerndt.

‘In this project, we have all disciplines together – computer scientists, geologists, atmospheric researchers and engineers,’ he added. ‘Overcoming all our different “languages” to find a solution everybody agrees on is the biggest but also most impressive challenge.’