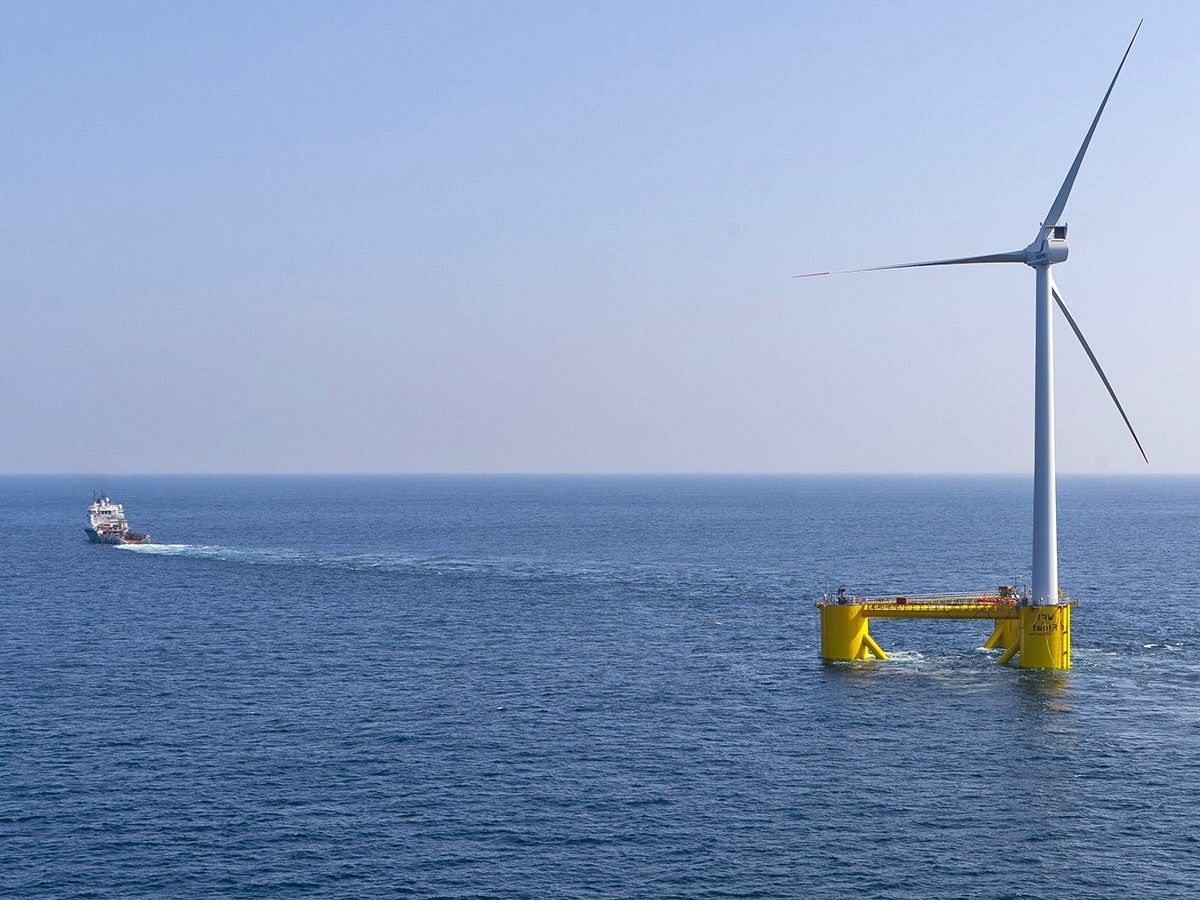 Advocates of floating offshore wind platforms say they are cheaper to run and install, less disruptive to sea life, and have greater output than near-shore alternatives. Image credit - WindFloat

As wind turbines become increasingly familiar sights along shorelines, developers of offshore floating platforms, which harness the powerful winds further out to sea, are seeking to establish their technologies as a major viable source of clean energy.

Bottom-fixed offshore wind turbines – with foundations in the seabed – face depth constraints and can only be used in relatively shallow coastal waters.

Floating offshore platforms can instead be built and installed in almost any marine environment. They are cheaper to run and install, more environmentally friendly to sea life, and have greater output, according to those behind the technologies.

What's more, positioning the turbines well offshore exposes them to the generating power of stronger winds.

‘The further you get from the coast, the more wind you normally get,’ said José Pinheiro, project director of energy company EDP Renewables.

The energy company is part of the WindPlus consortium, set up by Energias de Portugal, REPSOL and Principle Power Inc., which has secured a €60 million loan from the European Investment Bank under the InnovFin Energy Demonstration Projects instrument. This will allow it to scale up a pilot demonstration project, WindFloat, and take it out to deeper water.

‘With this WindFloat technology you have the ability to harness the wind where you have it most,’ Pinheiro said, adding that this meant there were many more potential sites than are available for bottom-fixed wind power.

A 2017 study showed that wind power generation over some ocean areas can exceed power generation on land by a factor of three or more. However, the technology is mostly still at testing phase as the bases of floating turbines need to be engineered differently from their near-shore counterparts.

Pinheiro said the new financing for the WindFloat Atlantic project, to be installed at a site off the northern coast of Portugal, is crucial to showing the commercial viability of the technology. It is also a long-term test of its technical attributes in tough conditions.

The three-column, semi-submersible platform will be mounted with an 8.4 megawatt turbine, floating in waters 85 to 95 metres deep. It is anchored at three points, as is common for oil and gas production facilities in deep water.

‘Scaling up can reduce the unit costs a lot, so we are really contributing to showing that offshore floating can achieve the targets that have been set for it,’ Pinheiro said. ‘It can also show the convergence of the technology with business opportunities around the globe.’

WindFloat Atlantic seeks to take advantage of onshore construction and assembly to reduce costs, and it is not alone in choosing that path.

‘The further you get from the coast, the more wind you normally get.'

Project coordinator Graeme Mackie says their design consists of a floating spar, a structure used in deep water oil production that looks ‘like a tower that floats (vertically) in the sea’ which is moored by chains and anchors in the seabed.

Normally, spars have to be immersed in extremely deep water, so to reduce this requirement, the team has added a semi-submerged buoyancy 'collar’ made up of several floats that surround the neck of the spar at the waterline and keep it raised. This hybrid satisfies stability and motion demands even in harsh environments.

FLOWSPA engineers devised an assembly strategy that allows the platform to be readily built at existing onshore shipyards, and enlists the local economies, which have been in decline in many parts of the world. The turbine is then towed out to deep water.

The simplicity of the design, the use of existing shipbuilding facilities and nearby assembly rather than the on-site construction of fixed installations, as well as the cheaper deployment of the complete platform, all contribute to reducing costs, Mackie said.

Their target is to generate electricity at about 60 euros per megawatt-hour – competitive with current inshore wind farms – for a large-scale facility.

‘(This) is achievable if you build these devices in serious production,’ Mackie added.

To get deep sea wind platforms up and running quickly, the Spanish SATH project has taken a different approach to its design, which comprises a twin hull with submerged plates, and is built mostly from concrete, rather than steel.

It is built and assembled onshore and then towed to its final position and hooked up – at a single point - to pre-installed mooring chains.

‘It can rotate around, so it is always facing the wind,’ said David Carrascosa, chief technology officer at Saitec Offshore Technologies, coordinator of the project. ‘The mechanical connection (for the mooring point) is through a bearing, and the electrical connection through a rotating electrical swivel.’

Having a single connection point and power transmission cables out at sea allow the platform to be quickly connected to the mooring infrastructure.

Being able to construct onshore and rapidly install the platforms mean that SATH bypasses the costly weather problems that can disrupt more time-consuming and complicated installations.

Carrascosa said the platform’s materials and construction approach, using local resources, means it can be mass-produced at sites around the world, close to where the wind turbines will be deployed.

With lower capital and operating expenses come major cost savings over the lifetime of the platform, particularly in depths greater than about 50 metres.

‘By making offshore floating wind production more competitive, we can see a big market ahead, and that is a goal for all of us,’ Carrascosa said.

Despite the projects’ different approaches to engineering and materials, all say they have embraced methods of construction and installation that reduce their impact on sea life, compared to fixed installations.

With much of the construction and assembly done onshore or nearby, the projects can minimise the noise levels that researchers cite as a major problem for marine mammals. Carrascosa said that disruption is also reduced by avoiding the need to embed major structures in the seabed.

‘People (in the industry) are really aware of these issues affecting the mammals and that is something you can avoid by using floating solutions,’ he added.

Innovative European companies can often fail to get funding to build the large-scale demonstration projects needed to develop their ideas into commercially viable technologies or services. This means they can fall into the so-called valley of death between innovation and commercialisation.

To bridge this gap and support the implementation of the EU's Strategic Energy Technology Plan, the European Commission and the European Investment Bank created the InnovFin Energy Demonstration Projects facility. Up to EUR 800 million is available to help companies demonstrate the commercial viability of their first-of-a-kind projects in the fields of renewable energy, energy storage, smart grids, and carbon capture utilisation and storage.

The Windfloat loan is the fifth such deal and, at €60 million, the largest so far. Previous loans include €52.5 million for the manufacturing of battery cells for use in transport, energy storage and industry, €30 million for a gasification plant to convert wood residues and industrial waste into electricity and heat, €15 million to set up a manufacturing line for new and highly-efficient photovoltaic technology, and €10 million to build a demonstration unit that converts wave energy into electrical power.