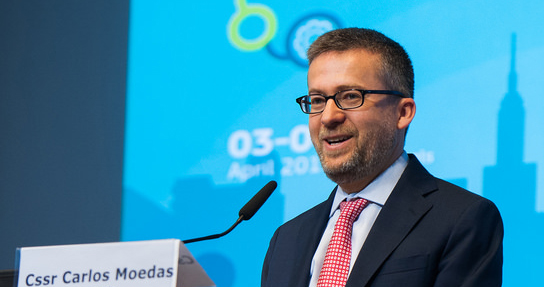 European Commissioner Carlos Moedas says that we need to invent, create and guide the future of connected and automated transport. Credit: Connected and Automated Driving conference

Connected and automated cars could improve road safety, pollution levels and social inclusion, but only if implemented well – and now is the time to shape the course of events, EU research commissioner Carlos Moedas told a conference in Brussels.

He was speaking at the first European Connected and Automated Driving conference held on 3 and 4 April in Brussels, Belgium, which brought together people from the automotive and telecoms industries, as well as academia and policymaking, to discuss how to best implement new driving technologies.

Automated driving – in which cars and trucks can carry out functions without the intervention of a driver – and connected driving – where vehicles can send and receive data while on the move – are key trends in the transport sector.

Commissioner Moedas said that a combination of these technologies with electric vehicles could help drastically reduce the 25 500 deaths that occurred on Europe’s roads in 2016, as well as decrease congestion and pollution. And he pointed out that while he sees three major challenges ahead in terms of technology, jobs and regulation, there is also an opportunity for Europe to take the lead in the field.

‘Car manufacturers are in a worldwide race towards automation, including new entrants from the global ICT industry,' he said. 'Europe needs to win this race.’

Violeta Bulc, European Commissioner for Transport, said that as well as increasing road safety, a widespread uptake of connected and automated driving could help older people and those with reduced mobility fully engage with society, but it needs to be rolled out in a way that everybody can benefit.

‘It’s time that we focus this great technology in delivering social good,’ she said. ‘I really would like to make sure that this technology is pushed as broadly as possible and it doesn’t become a technology of elites. I think that we need to find a way, because it is about safety, it’s about human life, it’s about quality of life.’

In the future, cars, trucks and buses are likely to be both automated and connected, and one of the main themes of the conference was how these fields are joining up thanks to collaboration between the automotive and telecoms industries.

‘(When it comes to) the disruptive technology trends which we see – connectivity is there and also autonomous driving as well,’ said Joost Vantomme, smart mobility director at the European Automobile Manufacturers Association (ACEA). ‘We formed an alliance with the telecommunications sector. These sectors have been living apart from each other, they didn’t talk to each other. So that’s new.’

The challenge is that to reap all the benefits such as reduced congestion and increased safety, cars should be able to make decisions autonomously but also based on information about what other vehicles, pedestrians and road infrastructure, such as traffic signals, are doing and intend to do.

‘You cannot have connected cars with physical borders.’

The conference follows the signing of a letter of intent in Rome, Italy, on 23 March by 27 EU Member States, Norway and Switzerland, to push forward with the deployment of large-scale demonstrations of connected and automated driving across Europe.

Two such initiatives are the Drive Me project in Gothenburg, Sweden, in which members of the public will test autonomous driving on public roads, and the L3PILOT project, which will show how automated cars can cross borders using 1 000 test drivers in 11 European countries. The idea is to capture the public imagination and encourage buy-in about the future of driving.

Commissioner Moedas pointed out that a Europe-wide approach is essential as connected cars crossing borders will need to seamlessly switch from one network to another and be able to process the same information in the same way in different countries.

‘If you want connected cars, you need a united Europe. You cannot have connected cars with physical borders, so you pass the border and the car just goes unconnected.’