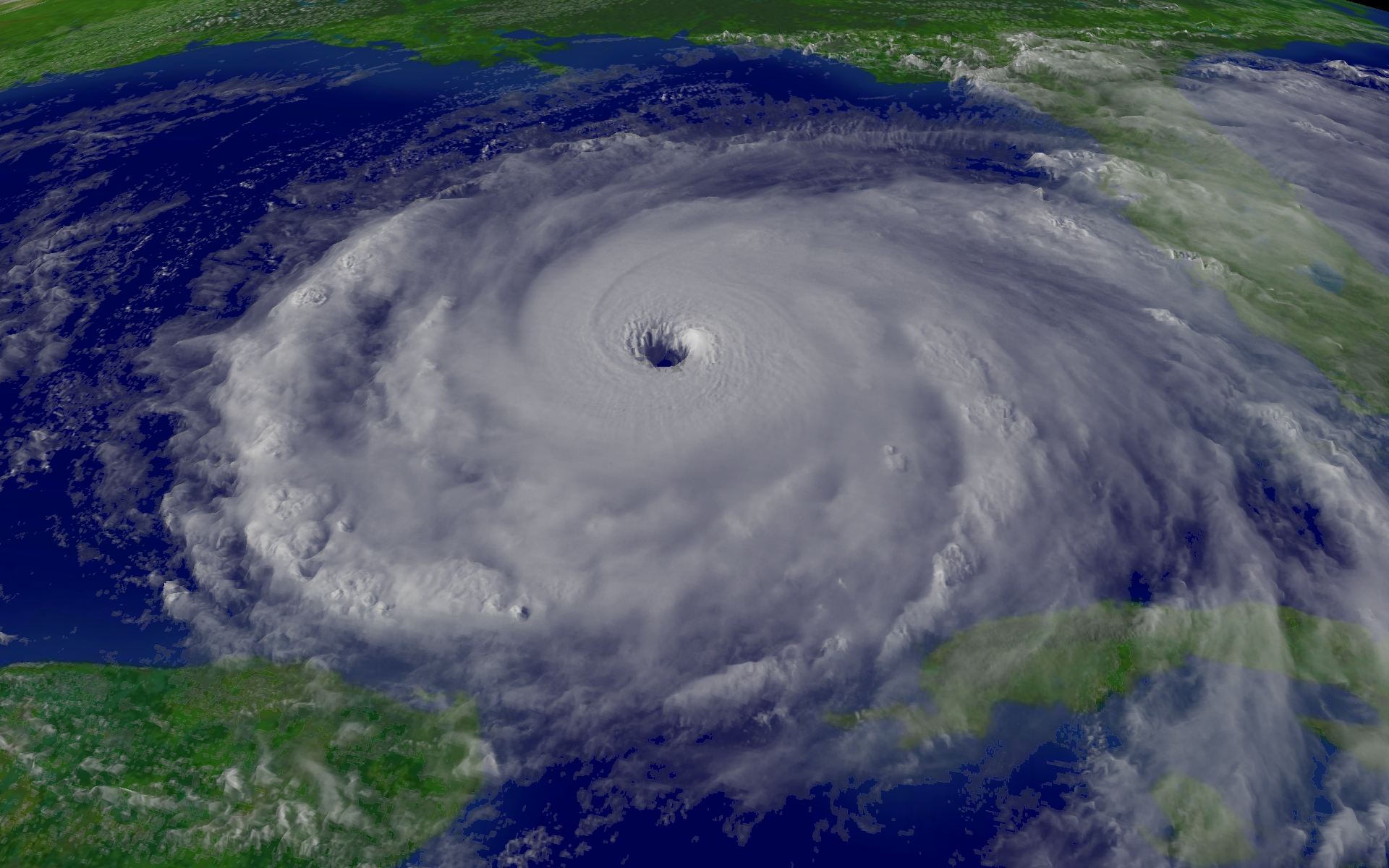 Researchers are developing new climate models to examine how the oceans and atmosphere will change in the future. Image credit - 'Hurricane Rita Peak' licenced by the US's National Oceanic and Atmospheric Administration

As residents in the Caribbean try to piece together their lives after being battered by two powerful hurricanes in a fortnight, scientists are working to find out if storms Irma and Maria are signs of what may come as the climate changes.

The link between climate change and tropical hurricanes is a slippery one. While scientists broadly understand the natural mechanics that drive these cyclonic storms, accurately predicting what may happen on a warming planet is far harder.

Some climate models — run on supercomputers that simulate the earth’s physical systems to predict changes in the future — reveal a future where there may be fewer hurricanes and typhoons, but those that do occur could be more powerful. Other research suggests the frequency will not change while there are studies that indicate tropical cyclones will become more common and more intense.

For nations in the path of destructive hurricanes, this uncertainty presents serious dilemmas for how to best prepare for the future. Should they invest billions in storm-proof infrastructure to protect their citizens, or abandon the most vulnerable communities to fate? Will more damage be caused by flooding or high-speed winds? Are their major cities likely to be at greater risk?

One major EU-funded project could help to provide them. The PRIMAVERA project is producing a new generation of high-resolution climate models that will examine how the oceans and atmosphere will respond over the next 30 years.

It will combine the results of seven different models which will be run side-by-side, all attempting to answer the same questions. One of these will be how global warming is likely to alter the relationship between the Atlantic Ocean and storms that form over it.

‘If we see a rise in sea surface temperatures in the Mediterranean, this may favour the formation of tropical-like cyclones.’

‘The climate models we are developing have a much higher resolution than the ones we are currently using,’ said Louis-Philippe Caron, a research scientist at the Barcelona Supercomputing Center in Spain, who is taking part in PRIMAVERA. ‘This next generation of models should have the sort of resolution where we can simulate the structure of the storms at a more realistic size and intensity.’

Hurricanes form due to a complex interplay between the ocean and the atmosphere.

Current climate models are able to simulate the effects of the ocean and atmosphere at a resolution typically between 50 and 100 kilometres, but at this sort of level it is hard to replicate many of the conditions that determine the size and intensity of hurricanes.

Another problem is comparing current models — they tend to use different data experimental approaches and different analysis approaches, which makes them hard to compare.

In PRIMAVERA, scientists are attempting to develop seven next-generation climate models that can replicate conditions in both the ocean and the atmosphere with some achieving a resolution of 15 kilometres. The models will simulate the observations over a 100-year period between 1950 and 2050, gathering atmospheric data for every three hour period.

‘The simulations we produce will be a lot more realistic and we will be able to compare them with the real observations we have from the recent past,’ said Caron. A single simulation run on the EU's European Commission-earth model being developed at the Barcelona Supercomputing Center as part of the PRIMAVERA project, will produce around 150 terabytes of data.

‘The amount of data we will be producing is vast,’ added Caron. ‘But as we will have many high-resolution models, all doing the same experiment and being analysed together, if we see them producing the same results, we can start answering some of the big questions about hurricanes. It is why this project is quite exciting.’

Those questions include how many storms might occur as the climate changes, but also the impact climate change will have on the destructiveness of storms, their wind intensity and the rainfall they produce.

The models could also help to reveal what impact hurricanes will have on Europe. Some hurricanes can travel North across the Atlantic, turning into ex-tropical cyclones that then dump large amounts of rain over Europe, causing severe flooding.

But many parts of Europe are often hit by a different type of cyclone that forms over the Mediterranean Sea and could be affected by climate change.

‘The Mediterranean is one of the hotspots for the formation of cyclones in the world,’ said Dr Emmanouil Flaounas, a meteorologist at the National Observatory of Athens in Greece who is conducting research on these storms in an EU-funded project called ExMeCy. ‘It is a very small region, but has a lot of cyclones.’

Although not as powerful as tropical cyclones, these storms can bring heavy rainfall and high winds, causing billions of Euros in damage in the countries surrounding the Mediterranean.

Dr Flaounas and his colleagues have already shown that in an 11-year period, 500 intense cyclones are responsible for up to 40 % of the total rainfall in the Mediterranean.

‘About once to three times per year, these cyclones may reach comparable intensity to a Category 1 hurricane,’ explained Dr Flaounas. ‘They can cause a lot of damage and flooding.’

These extremely powerful storms are known in the scientific literature as ‘medicanes’ — a portmanteau of the words ‘Mediterranean’ and ‘hurricanes’.

Unlike tropical cyclones, however, medicanes tend to form in the winter and typically only deliver rain for a day or two.

But Dr Flaounas’ research is also finding that not all medicanes are created equal. While some of the most powerful bring intense rainfall, there are other intense medicanes that generate little rain at all.

‘Some very strong cyclones might present very weak rainfall during their mature stage,’ said Dr Flaounas. ‘It appears to be quite unique to the Mediterranean.’

He has highlighted two different atmospheric processes appear to play a role in determining whether these storms will bring heavy rain or not.

Those with intense rainfall are powered by convection of water vapour from the ocean, much like tropical hurricanes, but also have layers of air known as warm conveyor belts, which are typically seen in the frontal weather systems that form off the west coast of the UK.

The drier storms do not show many signs of either of these atmospheric processes.

‘Knowing more about the detail of these processes and the impact they have on rainfall can help us to understand what will happen in the future as the climate changes,’ said Dr Flaounas.

There is some concern that changes in the climate may already be changing the behaviour of Mediterranean storms.

In November 2011 the south of France was hit by a medicane so large and powerful it was tracked by the US National Oceanic and Atmospheric Administration. Other recent powerful storms in November 2014 and October 2016 also formed a huge spirals more characteristic of tropical storms.

‘If we see a rise in sea surface temperatures in the Mediterranean, this may favour the formation of tropical-like cyclones,’ said Dr Flaounas. ‘At the moment there is too much uncertainty to know. But if we can understand what causes differences in the rainfall in Mediterranean storms, it can help us anticipate what will happen in the future.

‘This could help ensure the right mitigation plans are put in place,’ he said.

In the warm, humid regions of the tropics, ocean surface temperatures can rise above 27 degrees celsius, causing water vapour to rise off the ocean surface into the air.

This evaporation carries heat into the atmosphere, where the water vapour condenses to forms storm clouds, releasing energy into the surrounding air. This drives convection currents in the atmosphere, producing winds, which form into a distinctive swirling vortex due to the rotation of the earth.

As the hurricane pulls more heat from the ocean surface it can grow rapidly, but this can also drag up colder water from the depths, which can in turn slow the cyclone down.

When a cyclone hits land, it starts to weaken as it is no longer able to draw the heat that powers it from the ocean surface.

In the Atlantic Basin there are anywhere between four and 28 named tropical storms in any given year. This year there have already been 14 named storms with predictions that there could be a further five before the hurricane season ends.

Greenhouse gas emissions have risen significantly since pre-industrial times, while fossil fuel use and industrial processes increased by 126 % between 1970 and 2013.

The EU has set targets for reducing its greenhouse gas emissions by 20 % by 2020 compared to 1990 levels. This is part of its trio of goals known as the 20-20-20 targets, in which the EU also commits to sourcing 20 % of EU energy from renewables and achieving a 20 % improvement in energy inefficiency.