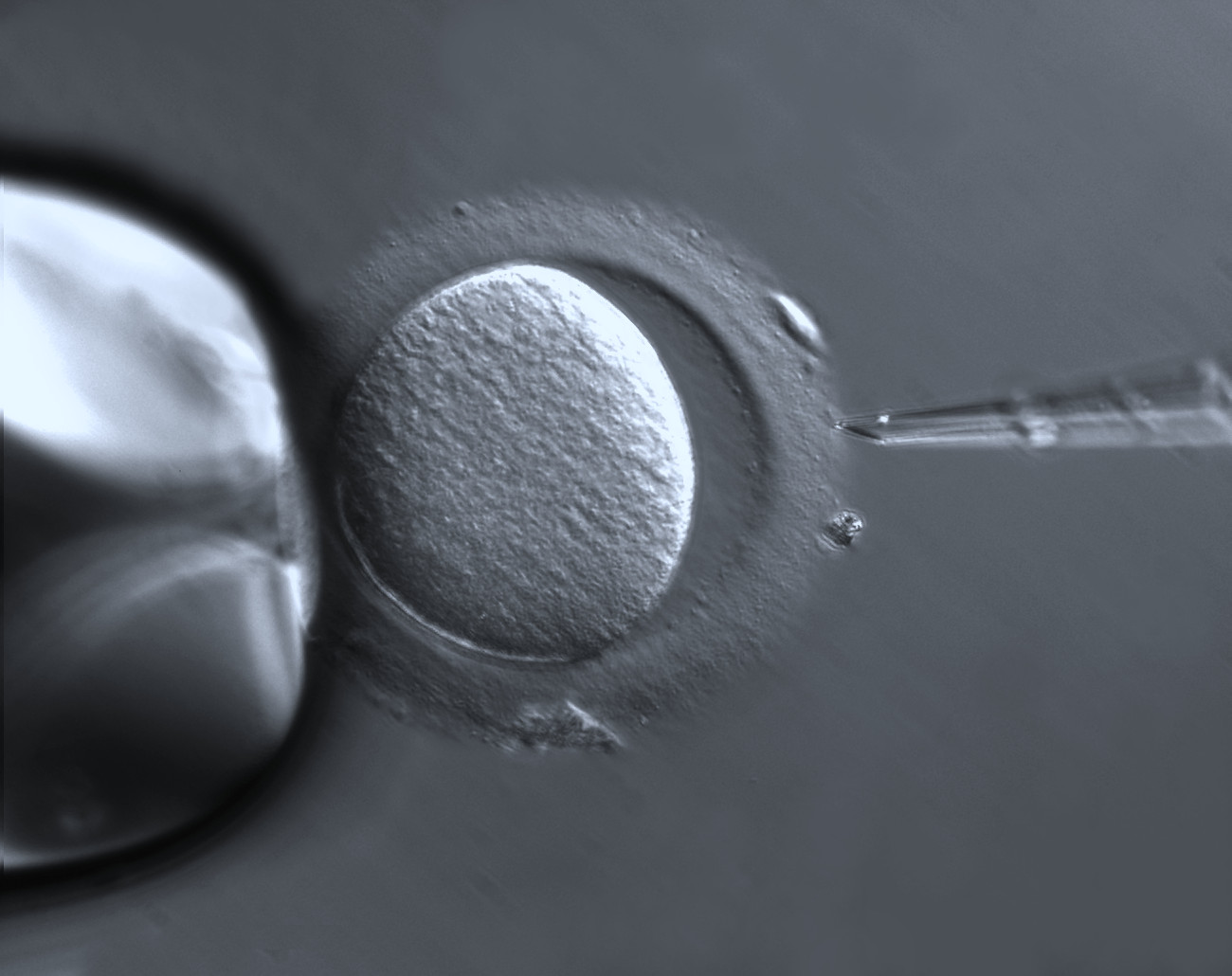 DNA or chromosome errors are found in 20% of women in their early 20s, say researchers. Image credit - ZEISS Microscopy, licensed under CC BY-SA 2.0

Decoding how the human egg matures and how this process can go wrong could lead to ways of preventing genetic errors leading to infertility, birth defects or pregnancy loss.

Physiological changes known to trigger miscarriages and to increase the likelihood of carrying a child with a genetic condition start in a woman’s early 20s, possibly earlier, and continue progressively through to her 40s, says Dr Agata Zielinska, a cell biologist at the Max Planck Institute for Biophysical Chemistry in Göttingen, Germany.

‘It was thought that things started to go wrong around the age of 35/36, and you were safe before then, but we’ve found that the chromosome structure deteriorates progressively,’ said Dr Zielinska. ‘Errors are detectible from the early 20s and by the age of 35/36 they are so pronounced, you really start to see them. So the clock is ticking continuously.’

Fertility issues present an ever-growing problem around the world. The World Health Organization (WHO) estimates that one in 10 couples struggles to conceive. As the trend for women to delay motherhood continues, some scientists hope to fix the biological mechanisms underpinning infertility.

For a project called ChromOocyte, led by principal investigator Dr Melina Schuh, Dr Zielinska was part of a team that set out to discover why genetic faults affect such a high proportion of ageing human eggs, or oocytes, resulting in pregnancy loss, birth defects and infertility. DNA or chromosome errors are found in 50-70% of older human eggs, along with 20% of eggs of women in their early 20s, says Dr Zielinska.

A growing number of trisomic foetuses, which have 47 chromosomes instead of 46, have been reported in the past decade. Down syndrome, Edwards syndrome and Patau syndrome are common forms of trisomy.

‘We wanted to see what was happening at a cellular level so that eventually it would be possible to design tools to correct (or prevent) these errors and eradicate aneuploidy (the presence of an abnormal number of chromosomes in an egg cell),’ said Dr Zielinska.

We wanted to see what was happening at a cellular level so that eventually it would be possible to design tools to correct these errors and eradicate aneuploidy (the presence of an abnormal number of chromosomes in an egg cell).

In a study that started at the Medical Research Council Laboratory of Molecular Biology in Cambridge, UK, and ended earlier this year in Göttingen, Dr Schuh’s team was able to do something unprecedented. Using super high-resolution cameras that illuminate microscopic structures, they were able to study and document live human egg cells in the moments preceding fertilisation, as these cells hurtle towards the completion of meiosis.

Meiosis is the two-step division process culminating in the fertilisation of a gamete – a mature sex cell. The second meiotic step starts when an egg leaves the ovary and takes a number of hours to complete in humans. This process has long been viewed as error-prone, though until now, it was not fully understood why.

In meiosis, a cell with two sets of chromosomes, called a diploid cell, splits its DNA in half, forming new cells with half the number of chromosomes. During successful fertilisation, a split egg cell joins a sperm cell that has also split its DNA. The task of dividing the sex cell’s DNA falls to a protein structure called a spindle, which binds to ‘handles’ on chromosomes called kinetochores. By pulling on these handles, the spindle drags chromosome strands in opposite directions as the egg divides. 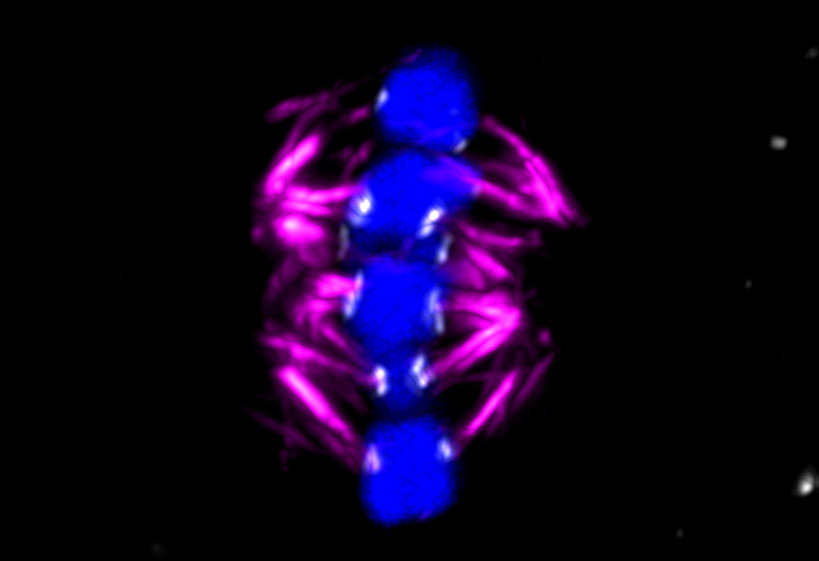 The ChromOocyte team captured chromosome deterioration in detail. By filming and photographing the moments before fertilisation, the team observed that the spindle is ‘unstable’ in human oocytes and often attaches itself incorrectly to chromosome strands, increasingly so with age, leading to genetic errors, according to Dr Schuh.

Experiments on mice have shown that the function of the kinetochores deteriorates with age. ‘In young (human) females, you will find two handles close to each other, near the middle of the chromosome, but as they get older, the handles separate,’ said Dr Zielinska. ‘This contributes to the spindle not being able to attach properly and then missegregation of the chromosomes occurs.’

In the course of the project, the team observed that age-related errors were far more abundant in humans than in mice. ‘In women – even young women in (their) early 20s – these handles are already quite apart. And the degree of deterioration is much higher as the woman gets older,’ said Dr Zielinska.

Aneuploidy, where there is an abnormal number of chromosomes, is most likely linked to this, she says.

Cohesin is another cell component that scientists suspect may be responsible for chromosomal errors arising in an ageing oocyte. Cohesin is a protein complex that holds sister chromosomes together until the egg is ready to divide its DNA prior to fertilisation. It is special among proteins in that it stays unchanged throughout its lifespan. It forms at the very start of life – mammals create their entire pool of immature egg cells before they are born – and soldiers on without regeneration until an oocyte leaves the ovary at the start of its journey down the fallopian tube.

‘It’s a mystery how cohesin can still bind the chromosomes, stopping them from falling apart, in a woman of 40,’ said Dr Kikue Tachibana, principal investigator of the ChromHeritance project. ‘How does a protein complex that starts its function in foetal development do so for such a long time?’

As it happens, cohesin isn’t infallible. It gradually falls away, causing degradation of the chromosome – a molecular process that Dr Tachibana has been studying in her lab at the Institute of Molecular Biotechnology in Vienna, Austria. ‘We think this is one of the causes of the “maternal age effect”,’ said Dr Tachibana.

Dr Tachibana is hopeful that her research will eventually lead to clinical interventions that will ensure chromosomes are separated accurately at meiosis. ‘We are testing a new hypothesis about cohesin deterioration that may provide insights into what triggers oocyte ageing,’ she said.

Another finding from Dr Tachibana’s lab involves paternal DNA, and potential errors that creep in as this is being reorganised in the fertilised egg. In the hours after fertilisation, the one-cell embryo goes through a process of genetic reprogramming, forgetting its history as an egg or a sperm and starting a fresh life as a whole organism.

This reprogramming process is fundamental to the start of life for any sexually reproducing species but how exactly DNA is reorganised remain largely unknown. Dr Tachibana’s work has started to explain some of the mysteries around these mechanisms.

She was keen to test the idea that tears occur in the paternal DNA as an essential part of this reprogramming process, and that the maternal DNA directs the surveillance system that registers and then repairs these lesions.

‘We (genetically) knocked out the DNA repair machinery (in mouse oocytes) and discovered that indeed there is DNA repair occurring during this process, and the zygote (the fertilised egg) actually has a tightly controlled surveillance mechanism that monitors the whole process,’ Dr Tachibana said. She adds that there is no further development of the zygote unless these tears are repaired.

The team hasn’t yet investigated the link between ageing and reprogramming, Dr Tachibana says.

‘But we would consider the hypothesis that with an aged oocyte, the repair mechanisms might not be very efficient, and if there’s an aged sperm as well – because sperm can also accumulate DNA damage over time – then the two together could be a particularly detrimental combination.’