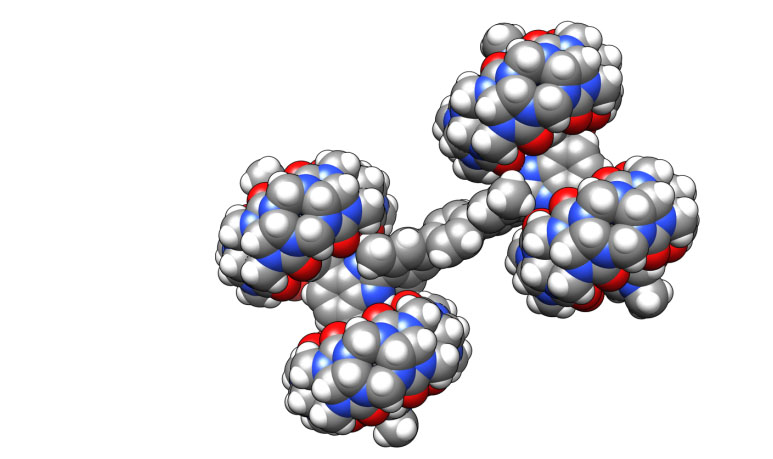 Six teams will gather in October to race their nano cars on a track the length of the flu virus. Image courtesy of Ohio Bobcat Nano-Wagon Team

Come October, six of the world’s most advanced vehicles will race for glory over a track made of gold. Only you won’t be able to see the groundbreaking event, because each competitor will be just nanometres in size.

This is the NanoCar Race, and it is being held at the materials lab CEMES at the National Center for Scientific Research (CNRS) in Toulouse, France. The idea is to encourage the development of technology made of single atoms and molecules that could one day revolutionise areas such as electronics.

‘It’s not about molecular vehicles per se, it’s about single-molecule mechanics and the way you can miniaturise gears, motors and so on to the atomic scale,’ said molecular scientist Dr Christian Joachim of CEMES.

The nano cars consist of complex single molecules designed by teams of chemists from all over the world. Though invisible to the naked eye, these molecules appear on the atomic scale like a ragbag line-up from Wacky Races – some with wheels, some with wings and some with paddles for propulsion.

Once on the gold nano-track, the vehicles will be spurred into motion by a scanning tunnelling microscope (STM), a tool with a very fine probe that blows single electrons. In fact, the STM at CEMES has four tips in order to drive up to four contenders simultaneously – one of only two in the world with such a capability.

The electrons from the STM pass through the molecular cars, imparting some energy as they do so. This energy is enough to jolt the molecules into a slightly different configuration – for example, turning the parts of the molecules that resemble wheels – so that they crawl along.

The American-Austrian NanoPrix Team designed a nano car that will compete in the 2016 NanoCar Race in Toulouse, France. Video courtesy of Prof. James Tour, Rice University

Dr Joachim believes it could take a day or longer for the cars to make it around the track, which has two corners, three straights and a total distance of 100 nanometres. That’s about the same length as a flu virus.

It is a ‘bit of fun’ said Dr Joachim, but it is also a way of challenging scientists to improve their control of single atoms and molecules on surfaces. That in turn will help them to develop practical technology, such as molecular electronics, in which calculations are performed either by channeling an electric current in single molecules or by making them perform intricate ‘clockwork’ mechanisms.

Dr André Gourdon, also from CEMES, says that one of the benefits of designing electronics from the bottom up with single molecules is the regularity of the components. This is unlike conventional electronics, in which the conventional top-down fabrication process can leave sizeable defects.

But building computers with single molecules is by no means easy. One problem is passing information in the form of electrons from one molecular processing unit to another, as metallic wires are unstable on the nanoscale.

‘We have to re-invent chemistry in two dimensions.’

In the EU-backed ARTIST project, Dr Gourdon and his colleagues tried to develop alternative methods. ‘We wanted a completely new way of thinking about this transport of information,’ he said.

One possibility they developed is the use of ‘plasmonic’ wires. These convey information in single particles of light – photons – but can convert the signals back into electrons at either end.

ARTIST also explored ways to store information on the nanoscale. Here the researchers found that, with developments in STM technology, they could inject and withdraw single electrons from individual atoms of gold, potentially offering a way to encode the binary values zero and one.

That project has ended, and Dr Gourdon is now working on another EU-backed project called PAMS that seeks to develop ways to form individual molecules on flat surfaces. ‘We have to re-invent chemistry in two dimensions, somehow,’ he said.

Traditionally chemists have synthesised new molecules in solution – crudely, by mixing different chemicals in a beaker – but this has limitations. Even if they can be synthesised this way to begin with, very complex molecules are not stable enough to be lifted from the solution and onto a surface without being damaged.

PAMS – building on a previous project coordinated by Dr Joachim, AtMol – is developing a new method of synthesis, which involves making only the building blocks of complex molecules in solution. These are then lifted onto a surface in a vacuum, and assembled into a final molecule with an STM and its sister tool, the atomic-force microscope.

And this is where the NanoCar Race could really drive progress. Although nano cars themselves are not directly relevant to molecular electronics, the tools used to manipulate them over the race track are.

‘It’s a competition to design or manipulate single molecules, and to understand what is the best solution,’ said Dr Gourdon. ‘The fact that it is a car race is not important – what we are learning is how to push the technology on the atomic scale.’